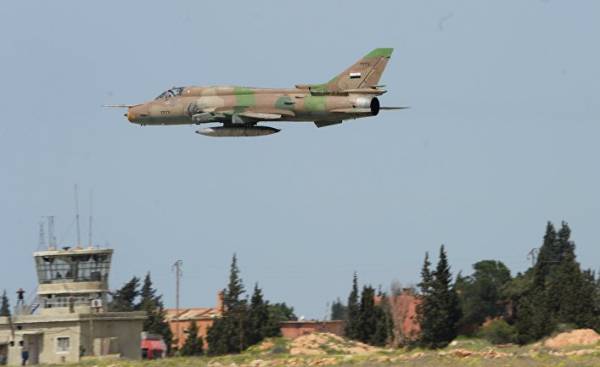 In the period after 11 September 2001, the United States and Russia in the fight against terrorism were allies. Now it seems that the cooperation in the fight against Islamic state (a terrorist organization banned in Russia — approx. ed.) is impossible. Why did this happen?

On June 18 the United States was hit over the strategically important town of raqqa in Syria a Syrian plane. This is justified by the need for force protection of U.S. allies on the ground, allegedly they were attacked by aircraft of the Syrian government forces. In response to Russia described the event as “aggressive” move, and the next day, the Russian defense Ministry said that Russia has decided to withdraw from the contract on the mutual exchange of information with the United States.

This means that Russia is threatening to shoot down American planes. The situation seems more and more tense, despite the fact that both Russia and the United States called ISIS enemy number 1, and trump had previously said that the fight against terror needs to return U.S.-Russian relations to normal.

One reason is anti-Western and anti-Russian images of the enemy, which has promoted the leaders of both the East and the West. It was not always so. Nearly two years ago, Putin said at the session of the UN General Assembly that would create a “broad international coalition” to fight terrorism.

The statement was perceived as an invitation addressed to the Russian partners in the West, and in the subsequent application year, both sides have done a lot of diplomatic work to develop a common solution to defeat ISIS in Syria.

Most strongly were set at the highest level. And the Minister of foreign Affairs of Russia Sergey Lavrov and U.S. Secretary of state John Kerry showed patience for the sake of finding common solutions. They continued to speak about each other as partners, even when known to the participants of the debate in their home countries to escalate the situation by a sharp anti-Russian and anti-Western expressions.

At the end of the year, the collapse became a fact

In September 2016, the parties entered into the agreement establishing the common cents fight terror in Vienna, where they had to identify targets for strikes and coordinate the bombing. Perhaps this project was too ambitious. Only a month later, the United States has refused any dialogue with Russia to achieve a truce in Syria. Then Russia tried instead to coordinate with Turkey and Iran. Failure to cooperate on Syria has become a fact.

The Russian leadership has for many years created the image of the enemy of the West, especially the United States, which hinders cooperation. The irony is that this manipulation continues to live his life and very rooted in the Russian system at precisely the moment when leadership was just wish an enemy a little faded.

Especially today, the media and experts in Russia make a great contribution to make it so that to cooperate with the West impossible. The media and the experts participating in the debate, describe the West as the self-proclaimed morally superior and hypocritical the value of using human rights to slander and overthrow regimes that it itself does not to taste.

A typical example of such relationship can be seen, if you take English and problemlessly customized TV channel Russia Today. In winter this channel daily show reports on the American bombing of Mosul and made a harsh accusation that, in his opinion, was a manifestation of double standards of the West.

“When they bombed Aleppo, you wrote that we had #standwithaleppo, but now you are silent. Where are your hashtags now? Silence says more than your hashtags” — asked in a fit of anger one woman in the footage, which the channel has shown every day many times.

In response, the channel has created its own hashtag in solidarity with the people of Mosul: #MosulSOS. However, the Russian media mostly do not criticize the military support by Russia of the Assad regime and instead focusing on the chaos that is ISIS. Just as Russia’s actions are perceived in the West as the aggressive behavior of the West is perceived in Russia as a manifestation of double standards. However, the bombing of Mosul and Aleppo indicate that they have much in common.

The image of Russia should not be so one-sided

The American public, in its one-sided view of Russia is no better. In the course of the election campaign of 2016 is known to the reviewers used the opinion trump of Russia in order to discredit him. Well-known liberal publications such as the New York Times and the Washington Post described Russia as a liar, trust which is impossible, and trump — like henchman Putin mishandled.

News that administration officials trump had contacts with Russian diplomats BEFORE HE was ELECTED, recent, emphasize the hysterical attitude. It has gone so far that even Masha Gessen is a prominent Russian journalist, one of the most prominent critics of Putin — made a very sarcastic comment on the anti-Russian sentiment, characteristic of the debate in the United States.

Democrats have traditionally been proud to advocate for foreign policy, preferring diplomacy to aggression and the arms race. Now they contribute to creating a more tense situation, thanks to its one-sided image of Russia as a threat. It should also be noted that the Senate last week took a decision to legislate a new and expanded range of sanctions against Russia, partly justifying it by the actions of Russia in Syria. It may be that the struggle with Russia will be almost the only issue on which Democrats and Republicans in the Senate will be able to negotiate.

The consequence of this one-sided perception and political climate that it creates, is that cooperation between the two countries, which belong among the most powerful in the world, seems impossible. Extremely limited freedom of manoeuvre trump in order to start cooperation with Russia, if he really planned to do this already materialized in policy on Syria that resembles the likeness of the war, not cooperation.

In April, trump has accused Assad of using chemical weapons during a gas attack in Idlib province, and 72 hours later the US has already bombed a Syrian airbase. Now over Syrian shot down a Syrian plane. Such actions will be grist to the mill of anti-American voices in Russia. It is very fit the image of the hypocritical US who dream of overthrowing the authoritarian, sovereign States, often by supporting “terrorists” and “opposition.”

However, the fact that the world is becoming less predictable, when Russia and the USA cannot agree on security issues in the world — fact. And in order to change such a situation, both countries should abandon the one-sided image of each other.