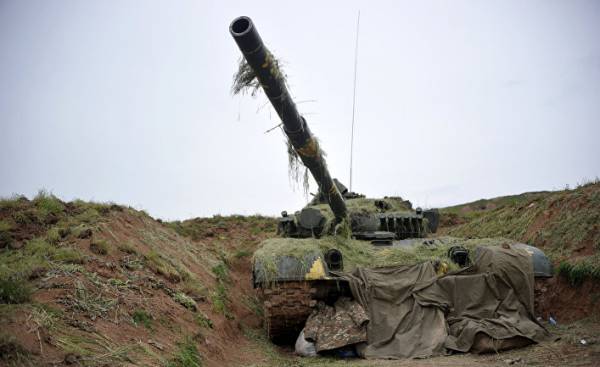 In April last year between Armenia and Azerbaijan clashes, which killed 200 (and according to some even 2 thousand). The fights were halted by international pressure, to significant boundary changes, they failed. In may and June last year, presidents Serzh Sargsyan and Ilham Aliyev held two meetings (Vienna and Petersburg), during which they reached agreements on monitoring implementation of the ceasefire. This step was intended to initiate negotiations on ways to resolve the conflict.

Meanwhile, the geopolitical situation has changed. Turkish President Erdogan at the end of June 2016 brought Russia’s apology for downed near the Syrian-Turkish border of the Russian su-24. Then events began to gather pace. Went to the rapprochement between Moscow and Ankara was not interested in the resumption of fighting between Armenia and Azerbaijan.

Turkey in this conflict declares absolute support of the Azerbaijani side, the Russian policy, in turn, looks thinner. On the one hand, Moscow is a major arms supplier to Baku, on the other, she took on the role of the military patron of Yerevan. Armenia is part of Russia created a Treaty Organization of collective security and on the Armenian territory is located the Russian 102nd military base.

The ambiguous position of Russia in the Armenian-Azerbaijani conflict, its rapprochement with Turkey and the Armenian recognition of the fact that the Azeris shoot at them from Russian weapons, contributed to the surge in anti-Russian sentiment. The culmination of events was the capture of a police station in Yerevan by the forces of radical opposition. While this incident could qualify as a terrorist act, he has the support of the society and provoked mass demonstrations. Despite this, the last in April parliamentary elections the convincing victory was won by the Republican party, a key role in which plays the Pro-Kremlin Prime Minister Karen Karpetyan. Next year he, apparently, will become President.

The result of the election is that the West didn’t get a chance to withdraw Armenia from the orbit of Russian influence: he helped her defend the rights of Nagorno-Karabakh and contributed to the Armenian-Georgian rapprochement. For Tbilisi, and Yerevan, as well as to NATO, the strengthening of relations between Moscow and Ankara is a threat. In addition, Azerbaijan has established an authoritarian regime in Turkey — an increasingly brutal dictatorship.

Europe followed, focusing on self-worth, to keep close to her in cultural and civilizational terms, Georgia and Armenia, to promote interaction between these countries and the development of democracy there. The liberation of Yerevan from the Russian arms would be a geopolitical defeat of Moscow (and to some extent Turkey): it could open up an alternative transit route for Iranian (and possibly Iraqi and also Kurdish) oil and gas. At the same time there would be a tool of pressure on Turkey and Azerbaijan. They would have to choose from two options: accept the situation and pursue a softer policy towards Europe or to condemn ourselves to complete dependence on Russia.

This, however, did not happen, although the resumption of clashes between Azerbaijani and Armenian forces can change the situation. Don’t want it, neither Moscow nor Ankara. On the one hand, the existence of the Armenian-Azerbaijani conflict would be beneficial for Russia, because destabilization of the South Caucasus does not develop its transit role, makes Armenia dependent on Moscow, and also forces both sides to buy from the Russians more weapons.

The Kremlin has absolutely no interest in the political resolution of the Karabakh conflict. Theoretically, the normalization of Russian-Turkish relations could contribute to the creation and implementation of the peace plan, but it needs the desire, but it is not. On the other hand, the outbreak of large-scale hostilities between Armenia and Azerbaijan will supply Russia and Turkey in an awkward situation because they guaranteed their support for opposite sides.

Escalation may, however, occur in any case since Azerbaijan after the cessation of fighting in April of last year, did not expect so much greater international control on the border (front line), but the return of seven districts occupied by the Armenian forces of Nagorno-Karabakh. It is the territories occupied in 1994 by Armenia, but not part of the Nagorno-Karabakh Republic. Yerevan is important to keep control over them, as they give a tactical advantage (in particular, because of the terrain).

In April last year, when the fighting ceased, Armenia increased its troop presence on the border, and the military of Nagorno-Karabakh approved a new defensive-offensive plan, according to which, in case of an attack by Azerbaijani forces, they will try to go to the counter and move the border 15 kilometers inland of Azerbaijan.

On the other hand, a small territorial gains achieved Baku, convinced him that the issue can be resolved by military means. Therefore, the increased number of incidents involving the use of heavy weapons, and for one only the first half of June, the ceasefire was violated 300 times.

In the report on Armenia-Azerbaijan conflict, the International Crisis Group warns that the fighting could resume at any time, and the risk increases the absence of any channels of communication between the Armenian and Azerbaijani military and political progress in the negotiations, and the reluctance of politicians to take any decisions which will allow to establish a stable peace.

Azerbaijan believes that the situation is advantageous, both from the military and foreign policy point of view, hoping to change the status quo. It is, in particular, the superiority in military power and the Russian-Turkish cooperation. Azerbaijan believes that the Kremlin will not risk its relations with Baku and Ankara, protecting Nagorno-Karabakh from the seizure of Azerbaijani forces, and the US and Europe at least remain neutral. Washington is not interested in aggravating relations with Turkey on it for minor reasons, and the Europeans need Azerbaijani oil and gas. Armenia, in turn, seeks to preserve the status quo, aided by the lack of progress in peace talks.

The prospects for a peaceful settlement of the Armenian-Azerbaijani conflict depends on the fulfilment of three conditions: the return of Nagorno-Karabakh the seven occupied Azerbaijani districts, the referendum on the status of the unrecognized Republic and the introduction of international forces to monitor the implementation of decisions in life.

Azerbaijan expects that he will receive seven of their neighborhoods, and only then will start negotiations on the settlement of Nagorno-Karabakh’s status, not declaring his readiness to acknowledge his sovereignty or to agree to its accession to Armenia. Yerevan says it is ready to discuss broad autonomy of the region only in the Azerbaijani borders. In turn, Armenia (not stating it directly, as it would cause protests) would be willing to give seven of these areas under the condition that Azerbaijan recognizes the right of people of Nagorno Karabakh to self-determination. The rejection of these areas will weaken the Armenian defence potential, that is, can persuade the Azeris to solve the issue of Karabakh’s status by military means.

At the end of last year, there were rumors about the existence of “Lavrov plan”, the provisions of which are contrary to the interests of Armenia. He was told, suggested that Yerevan already in 2016 will return to Baku five districts, and only then will start negotiations on the mechanisms for determining the status of Nagorno-Karabakh. The existence of such a plan the Russians eventually denied.

Everything points to the fact that the new outbreak of large-scale hostilities is only a matter of time. Although Russia is not interested in such developments, it will not be able to stop it and will not take active steps to protect Yerevan. Russian obligations in the area of mutual defence shall not apply to territories that in the light of international law are not part of Armenia.

Moscow hopes that the Armenian state will be isolated (and, hence, will be doomed to a dependence on the Kremlin), because under the pressure of Turkey and the United States (and Europe) it will not defend against attacks of Azerbaijan and will be limited to calls for peace. If the West will be able to exploit the disloyalty of Russia to Armenia, he will be able to deploy the geopolitical situation in the Caucasus against Russia.