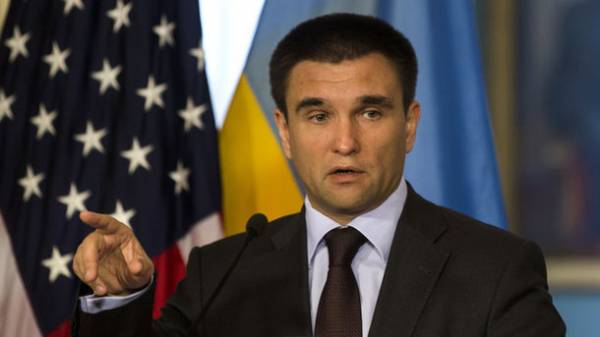 Ukraine intends to organize a conference of member countries of the “Normandy format” on settlement of the situation in the Donbass, said the Minister of foreign Affairs of Ukraine Pavlo Klimkin, who is in Italy on a working visit.

“Ukraine intends to organize a conference of member countries of the “Normandy format” on settlement of situation in Donbass”, – stated in the message on the website of Radio Liberty on Tuesday evening, citing a statement by the head of the Ukrainian foreign Ministry in Rome.

At a press conference in the foreign Ministry of Italy, Klimkin said that a telephone conference between the main representatives of Ukraine, Russia, Germany and France to be held in the near future, “we are talking about a few days.”

According to the head of the foreign Ministry of Ukraine, Kyiv phone discussion “question makes clear: Russia is no longer a need to be able to violate the Minsk agreements.”

“Moscow needs to stop the shelling, the withdrawal of irregular forces, allow for monitoring by the OSCE in the entire territory of Donbas, including Ukrainian-Russian border, to release the prisoners and to facilitate the holding of free elections,” said Klimkin in Rome.