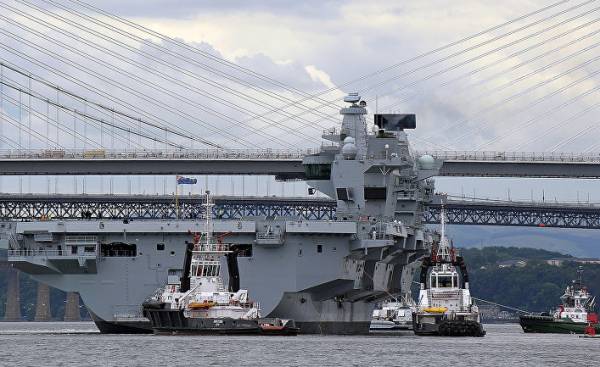 The largest British warship slowly emerged from the shipyard and headed out to sea for sea trials.

The aircraft carrier “Queen Elizabeth” with a displacement of 65 thousand tons left dock in Rosyth and went to sea through a narrow channel with the stock on each side by 35 inches, and two feet of water under the keel.

Then the ship passed on the river Fort, near three bridges, including, under the rail with the stock at a height of about two meters.

Sea trials of the “Queen Elizabeth” was a milestone in the decade-long history of the construction of two British aircraft carriers worth over six billion pounds.

The Navy is preparing a ship to the first public appearance, among which will be a lot of Russian spies. Russian submarines, ships and aircraft all trying as closely as possible to look at the new British flagship.

“Queen Elizabeth” will be accompanied by a warship of the Royal Navy, helicopters from shore bases will search for submarines, and the sailors will begin testing the new flagship in the North sea and the Moray Firth.

The chief of service of logistics of an aircraft carrier captain of the 2nd rank Fiona Percival (Fiona Percival) said, “the Russians will appear and will look, but they look at everything.”

Senior carrier-based aircraft, the captain of the 2nd rank mark Deller (Deller Mark) said that the aircraft carrier goes to sea, accompanied by a frigate or destroyer.

He said: “We will go there, where is the best place where best to act Soviet nuclear submarines. The reality is that we can take care of ourselves, if our escorts will be the right time in the right place. Not necessarily to stick to one place when you can change it and go somewhere else.”

Sailors and engineers worked around the clock, preparing the ship for sea. In the first six weeks of tests on Board will be about thousands of sailors and contractors. The crew every day for several hours to conduct classes on safety, damage control, with fires and flooding and to rescue the fallen over Board. For tightness and fire safety was checked 650 doors and hatches.

Managing Director of the Alliance of defence industry for the construction of ships Ian Booth (Ian Booth) said, “the Fire of London made it clear how dangerous it is, so we are on the ship we leave nothing to chance, whether it’s flooding or fire.”

The aircraft carrier was laid eight years ago, but on active duty he will go no earlier than 2021. First, together with the British aircraft on the deck of an aircraft carrier to put the American F-35B from the marine corps, and so it will be up to until will not be eliminated by the lack of British cars.

In the Royal Navy due to budget cuts, aircraft carriers were not in 2010.

A new aircraft carrier was built at a time when every year in the Navy a budget black hole of $ 500 million pounds, but because of the staff new ships crews for increasing criticism because of the lack of personnel is found in other places.

Critics of the carriers also argue that it is an expensive white elephants, and that they are absolutely not protected from a new high-speed missiles.

The commander of the ship captain 1st rank Jerry kid (Jerry Kyd) said: “In this world nothing is invincible, be it city, car, person or vehicle. We in the armed forces without any hesitation talking about the risks and how we will address them at the theatre of hostilities”.

“If you look at the leading countries of the world, why each such country from the highest echelons investing billions of dollars in aircraft carriers? What they all wrong? The reason lies in the fact that the carriers give the state extremely agile exposure tool. And speech here not only about the conduct of hostilities. We are talking about deterrence, coercion, demonstration of power, aid in natural disasters, humanitarian assistance, military cooperation”.

According to the kid, in 2021 Britain “for the first time uses this ship seriously.”

The flight deck area exceeds half a hectare, and on Board the aircraft carrier can accommodate up to 36 stealth aircraft vertical takeoff and landing F-35B.

Ukraine is Europe: a legal “high”