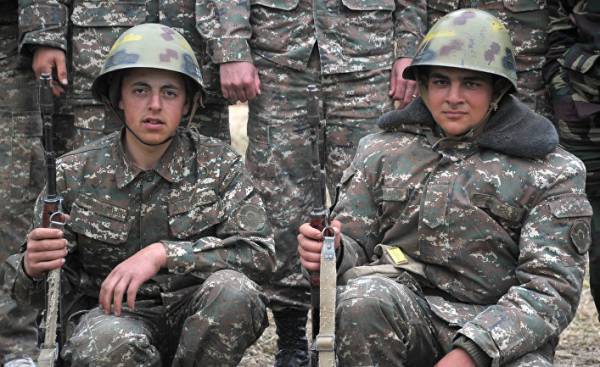 The main task of the co-chairs of the OSCE Minsk group is now to prevent large-scale war. It is clear. But let’s say the co-chairs are able to establish relative peace (although you should never exclude the possibility of provocations, new waves of tension by Azerbaijan, moreover, the only hope of Azerbaijan constantly blackmail of intermediaries such methods). In this case, will discuss the parties at the negotiating table?

The Madrid principles remain on the negotiating table, how they were developed, amended and revised, and whether they correspond to the views of the Armenian side after the April war?

We are dealing with a situation in which Azerbaijan eliminates the option of conflict settlement through peaceful negotiations based on mutual concessions. Actually does anyone any concessions to the official Baku is ready? More than two decades, official Baku constantly repeats the same “we are ready to grant Karabakh a high level of self-government.” And the only thing that promises Azerbaijan not to restart the war, which is hard to believe. That is, the position of Baku in the negotiation process is beyond the scope of philosophy of the settlement.

At the same time, however, as far as the current situation was not a dead-end for the settlement of the Karabakh conflict, nevertheless, the Armenian side best destructive position of Baku, as it gives the opportunity to suggest new approaches.

Interesting was the statement of the Minister of foreign Affairs of Russia Sergey Lavrov before the last regional visit of the co-chairs of the OSCE Minsk group, in which was fixed a deadlock in the negotiation process. In the negotiation process of Karabakh conflict settlement agreed on common principles, but agreed not to small but very important and sensitive items, he noted, giving some details of the negotiations: “Agreement on the settlement of the Karabakh conflict in different formats, many times were on the verge of agreeing, but then one, then the other side had the instincts of distrust… But we need to continue to work.”

The Minister of foreign Affairs of Russia stressed again that the parties are unable to agree on how to reach settlement. “There are a number of principles that in total all agreed, but the devil sits in the details — how to move forward to this settlement, which way? This seemingly small details, but very difficult and sensitive, including in terms of internal political developments,” — said Lavrov. “Parties basically rejecting the base, according to various present a timeline of implementation components of the settlement,” he added.

During the recent visit of the OSCE in an official statement about their meeting with Armenian President Serzh Sargsyan said that the mediators and the Armenian authorities “stressed the importance of fulfilling the obligations of the parties for a peaceful settlement of the conflict in the negotiation process and the agreements reached at the highest level.”

And the Minister of foreign Affairs Edward Nalbandian during the meeting with the co-chairs and personal representative of the OSCE Chairman Anjaam Kasprzyk drew their attention to the fact that “in the course held in April in Moscow the meeting of foreign Ministers of Armenia, Russia and Azerbaijan, in the presence of the co-chairs, an agreement was reached on the distribution of the same text of the press release, which was published by the foreign ministries of Armenia and Russia. And the Ministry of foreign Affairs of Azerbaijan, as usual, not only did not fulfill the agreement, but made a senseless comment, though the meeting in Moscow the foreign Ministers noted the importance of implementation achieved at the previous summits of the agreements and in the negotiations discussed the recent summits of the negotiations.”

Nalbandian stressed that, although the address of the co-chairs ‘ statement from the 18th may was not the first, Azerbaijan not only continues to ignore, to neglect the calls of the OSCE, but to do the opposite. According to him, “brewing the moment when the co-chair countries as a format internationally mandated mediation efforts aimed at resolving the problem should not only make statements but also to take appropriate action to curb this destructive and provocative policy of Azerbaijan.”

The OSCE MG co-chairs and personal representative of the OSCE Chairman in Yerevan, met with the Minister of defense of Armenia Vigen Sargsyan. According to the Ministry of defence, the Minister of defense drew the attention of the interlocutors was in a recent incident on the line of contact, welcoming address in the response of the co-chairs of the OSCE Minsk group. “As an important guarantee of the effectiveness of negotiations over the settlement of the conflict Vigen Sargsyan stressed the need for implementation on the frontline — in accordance with the summits in Vienna and St. Petersburg arrangements, mechanisms to monitor the situation and investigate incidents and, thereby, formation of atmosphere of mutual trust”, — stated in the message MO.

We will remind that on may 19 the co-chairs of the OSCE Minsk group issued a statement in which, inter alia, stated that the increased tension on the contact line between Armed forces of Nagorno Karabakh and Azerbaijan started “subsequently, the ceasefire violation by the Azerbaijani side”.

The Armenian side should try to change the political logic in the settlement process. This should be achieved as a result of the initiative, diligent and consistent work. The impasse must withdraw by the official Yerevan, in the first place, forcing Azerbaijan to maintain the ceasefire, and then only through the co-chairs outlining options for achieving a settlement which will not lead to deadlock situations.

Isn’t it time to Nagorno-Karabakh became a full party to the conflict and resolution? As we (the Armenian side — approx. ed.) is used and to what extent we use the capacity of lobbying structures in the Diaspora in the recognition of the NKR status? Underneath these questions lies the specificity of the NKR status, which is essential in today’s Azerbaijan to reach any agreement or even agreement. Therefore, without a definitive Treaty of peace, without a final determination of NKR status, all terms and conditions in other formulas or options will be temporary and will again lead to a dead end. At the same time, it must sooner or later realize the authorities of Azerbaijan.