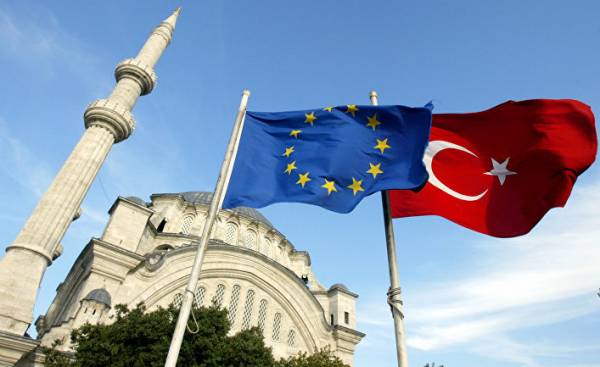 After Sunday’s referendum it has become clear that Turkey does not become member of the EU in my lifetime, if it ever will be. The fact is that with a narrow margin, Turkish voters waved Europe goodbye. But there are many good reasons to Europe said goodbye to Turkey.

The victory of President Erdogan in the referendum was so unconvincing that it is difficult to assume a clear expression of the aspirations of the Turkish people. He had expected a victory with much more advantage — as well as many others, considering the fact that it absolutely was not about a fair election campaign: the opposition was difficult because of the state of emergency, which expires on Thursday, and the media ran Erdogan and his “Party of justice and development”. He still didn’t get the 55% “Yes” to the constitutional reforms that had been hoped for. And in the three largest cities of Turkey — Istanbul, Ankara and Izmir — the majority said the changes “no”. The results of the referendum in Istanbul would be especially discouraging Erdogan. It was here that his political base when he started his way to the top in Turkish politics. He was Governor of Istanbul, and for the first time since 2002 he lost the election here.

But we must not entertain the hope that the results of the referendum will be revised, this will not happen even if will be made a recount. To do this it would be quite appropriate, because the Electoral Commission in the midst of the referendum decided to change the rules, and ballot papers without the seal was still counted as valid. But it’s done. You can slightly console yourself with the fact that unlike previous changes to the constitutional status of Turkish democracy weakened or even eliminated, this time it was about (in part) the democratic process. Except for the fact that the opposition was weakened, more than 100 000 people in the public sector have lost their jobs or were sent to vacation, nearly 50,000 behind bars, and a large number of journalists arrested and media are closed. The counting of ballots, in any case, monitored by observers from the OSCE, of which Turkey is a part.

Sad to see how Turkey is turning into an autocratic state, which becomes evident after Erdogan failed to achieve what he wanted. Now he can remain President until 2019 — longer than the “father” of the Republic Kemal Ataturk. The President has greater powers than it ever was in the history of the Turkish Republic, and if Erdogan wins the election in two years, he will be able to use these powers fully. By our standards, it is undemocratic.

When Erdogan appeared on the political arena, after years of persecution and deprivation of civil rights, many — including me — consider it as “new Istanbul”. He began political and economic reforms of this magnitude and with this prospect, which since Ataturk had a little bit. The economy and civil rights flourished. Turkey has started a magnet to attract foreign investment. There were prospects of resolving the long-standing internal strife, primarily the problems of the large Kurdish minority.

And then there was a film break.

I remember the feeling that something is not as it should be, when a few years ago I went to Istanbul and had Breakfast with a group of local journalists. They talked about manners Sultan Erdogan when he wanted to publish a decree that the national alcoholic drink of raki should be replaced with do not contain alcohol milk drink, or the fact that flight attendants of the company Turkish Airways had to change clothes to the one that more than covers the body. They sneered at his manners Sultan, over a huge Palace, which was built over a huge Turkish flag waving over the Bosphorus. It was not a few years earlier, in my last visit to Turkey. But this was only the beginning: Erdogan’s lust for power became increasingly dangerous manifestations, he began fighting with his old ally Fethullah Gulen, who has lived in exile in the United States. Suddenly the question was raised the role of Turkey as a model for the development of a democratic state, in which the population is Muslim.

The failed coup of last year further aggravated the situation. Arrests, dismissals, emergency — and finally, the requirements of changes to the Constitution that give the President (Erdogan) the powers do not meet the standards of Western democracy. It was proved that Turkey needs strong leadership (or, more simply, head) because of the threats faced by the country externally and internally. If we heard that before?

From all of this? Some might argue that Erdogan just showed its true Islamist face, and a choir of such voices we already hear. But that’s too easy. Europe cannot absolve themselves of much of the blame. Turkey entertained the questions about EU membership to the extent, which later became so painful that one should not be surprised that it caused such a reaction from an ambitious politician like Erdogan.

Turkey promised membership in the European community in the 1960-ies, although the official process of admission was started only in 2000-ies. But the process was incredibly slow, primarily because Greece and Cyprus has taken every opportunity, (to) pour sand into the mechanism, when in the process of talks was to open a new Chapter. A real bomb for the process, was the fact that Cyprus became an EU member at the time when the dispute about the division of the island has not yet been solved, and that the Greek Cypriots, immediately after he secured the membership said no to a UN plan providing for the unification of the two parts of the island. And it meant a real end to the negotiations with Turkey.

Not helped also by the fact that European political leaders — headed by the then President Sarkozy as the most noisy example — expressed in the sense that Turkey has never and should not rely on membership, even if these conditions have been met the “Copenhagen criteria”. Then Turkey’s enthusiasm about Europe began to subside. Today, the majority of the population already does not aspire to EU membership.

Last year Turkey needed to patch some holes in unprotected external borders of Europe to slow down the flow of refugees and migrants. Turkey once again became important. There was no lack of either in money or insinuating speeches. But trust was no more, and in the last year, we watched as Erdogan’s moving closer to another ruler-an autocrat who renounced liberal democracy: Vladimir Putin.

That is why Europe should not use the results of Sunday’s referendum in order to fully write off Turkey from the accounts. Turkey is an important NATO ally, it plays an absolutely crucial role in the fight against ISIS (a terrorist organization banned in Russia — approx. ed.). Turkey also plays a key role in ensuring the security of the external borders of Europe. The EU should maintain all the contacts with Turkey, which is not impossible, given the fact that Europe is an important trade partner of Turkey. In other words, there are many common interests — and the European perspective should not be buried completely, although to see Turkey as a member of the current EU — is unthinkable. Everything changes. And it would be foolish to further push Turkey in the wrong direction.