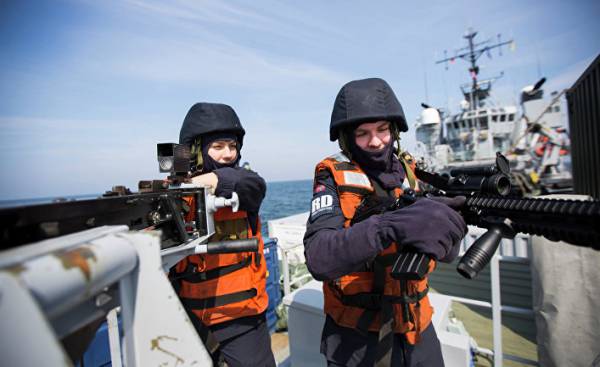 Russia is stepping up arms, and that helps Sweden and Norway have become even closer. No matter, there will be a crisis in the Baltic or in the Arctic, both countries are quickly involved. About it the newspaper Dagens Nyheter said the Norwegian and Swedish Ministers of defense.

The Norwegian Minister of defence Ine Eriksen Søreide (Ine Eriksen Søreide) on Thursday five hours talking with my colleague Peter Hultquist (Peter Hultqvist) in Stockholm. She is a member of the Conservative party of Norway and took office in the fall of 2013, that is, she works at the post of defense Minister for a year longer than Hultquist. Both closely follow the growth of Russian arms.

“We see that the activity of the exercise, their level and the difficulty is now quite different than before. Military-strategic importance of the Northern regions to Russia is growing. It is important for us to monitor this activity at the national level, but also not to forget about the prospect of NATO. In addition, we are discussing how Norwegian-Swedish and also obsessivness level,” said Ine Eriksen Sereide Dagens Nyheter.

Norway has a common border with Russia to the North and along long sections of the Barents sea. Russia is building new bases in the Arctic, strengthen the defenses around his military stronghold on the Kola Peninsula and demonstrates new weapons systems.

“In the area of security policy, we generally have a common view regarding the growing Russian activity in the Baltic States and neighbouring Norway areas. This situation poses new challenges to the country’s armed forces and how we continue to work to protect our sovereignty,” says Peter Hultqvist.

“The door to Sweden for us is crucial. We see a very important connection between what happens in the Baltic sea, and what could potentially happen in the Nordic region. Therefore, dialogue and practical cooperation are extremely important.”

The Minister explained why this is so:

“Our analysis of the situation shows that if the conflict will arise in the Baltic States, it quickly spread to the Scandinavian region, though we now do not see Russia as a direct military threat. But to the North is the military potential that will be brought to bear, if Russia will enter into a conflict”.

On the other hand, the conflict in the North could spread rapidly in the Baltic sea and Sweden, despite the fact that Sweden is not part of any military alliances.

“If something happens close to us, we almost immediately will be fully affected by this. No matter if it happens near Norway or in the Baltic sea, in one form or another it will affect all. The possibility that we will be able to stay away, I think, impossible,” says Peter Hultqvist.

Sweden and Norway together training, but also planning in-depth cooperation. But at the highest level between the capitals of the relations have been cool since, like Norway in 2013 left the project in artillery Archer. Now the neighboring countries even suspended the exchange of military attaches. But in August the Norwegian attaché takes its place in Stockholm and Swedish in Oslo will appear no later than Jan.

Dagens Nyheter: the Years of a cool relationship is over?

Peter hultquist: Yes, you could say. We must continue to move forward here and now.

January in Central Norway are 330 us Marines, there are several stages of the study conduct of the war in winter conditions. With critics claiming that it could provoke Russia, Minister of defence of Norway does not agree:

“Don’t provoke the Russians know full well what the teachings are and what they are not.”

According to her, Sweden has the opportunity to train with the Americans on Norwegian soil, though on Thursday, the issue has not been addressed.

“It’s possible, if such a desire exists in Sweden and the USA”.

In the next 20 years Norway is planning to increase contributions to the defense of 180 billion kroner. The aim was to change the longstanding situation of insufficient funding of defense. In addition, there are plans to buy new US F-35 and the new anti-submarine aircraft P8.