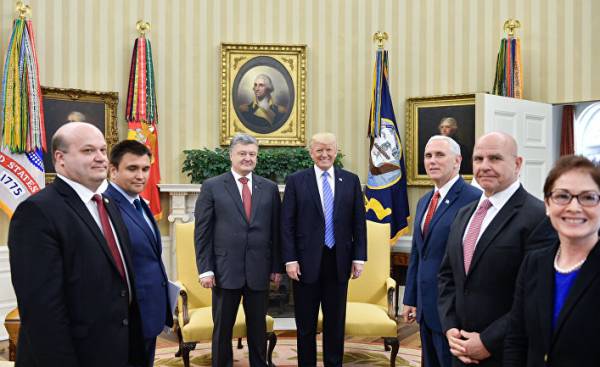 In international relations there is a strong belief that the head of any self-respecting state should meet with President of the United States. Therefore, after the election of Donald trump to the highest office of the U.S. global leaders and politicians at the local level, figuratively speaking, lined up in front of the White house. Read more on iDNES.cz review Vladimir Votapek about the meeting of Peter Poroshenko with the American President.

Someone wants to discuss with the new guest, something important, and someone just wants to get some photos, but somehow all the world leaders have instructed their diplomats as soon as possible to arrange a meeting with the President of the United States. That is the challenge, can tell a lot of the current Czech Ambassador to the United States. Despite the loud statements of the President’s administration of the Czech Republic, our Ambassador has not yet fulfilled its task.

In some cases, the desire to curry favor with the American President brings to this rivalry between politicians from neighboring regions. Probably the most bitter struggle was in the case of the Russian Federation and Ukraine. Since the Russian Federation occupied a part of Ukrainian territory and using separatists waging an undeclared war with Kiev, the Russian-Ukrainian crisis is one of the key issues in international relations.

During the reign of Barack Obama, the United States had not taken responsibility and was a very valuable ally of Ukraine. Together with the EU and other democratic countries, the US has contributed to the introduction of sanctions, which in the most tangible form was given to understand that the international community condemns Russian aggression and a clear violation of international law.

It should be noted that the election Donald trump is not pleased with the Kiev government. During the election campaign, a candidate trump has made several statements announcing that under his leadership, the U.S. can reevaluate his position on the Crimea, perhaps in exchange for Russian concessions in Syria, and perhaps in the name of some other transaction. Then it was unclear.

Anxiety Poroshenko called the approaching elections in France, where the main display was the Pro-Kremlin candidates françois Fillon and marine Le Pen. Of concern is the upcoming fall elections to the Bundestag and the fact that six months ago, Chancellor Merkel could not claim the status of a favorite in these elections. Therefore, Kiev was forced to consider the real possibility that it will lose the support of all the three powers that helped protect him from the Kremlin.

But after the election Donald trump is gradually changed his Ukrainian policy. He stopped talking about the re-evaluation of the annexation of the Crimea and began to hint that the responsibility for solving the Russian-Ukrainian crisis lies first and foremost with Europe. By the way, here he does not deny the right. Now his Secretary of state Rex Tillerson stated the need for more active U.S. involvement in resolving the crisis, thereby approaching the original position of the Obama administration. By the way, as in the case of the previous American government, a key figure responsible for relations with Ukraine, it seems, can be Vice-President Pens.

Thanks to the visit of Petro Poroshenko to the White house the Ukrainian diplomacy can record his point. And it’s not so much that, after a meeting with trump, Kiev managed to beat Moscow. Although this fact also plays a role, judging by the reaction of the Russian media, which, of course, are trying to downplay the significance of this meeting in the oval office.

More important than pretty short meeting with the American President, the fact that during his stay in the United States, the President of Ukraine and his foreign Minister met with certain other representatives of the American government. Among the opponents were, including Vice-President M. Pence, Secretary Rex Tillerson, defence Minister George. Mattis, as well as the Minister of energy R. Perry. The success of their “information mission” confirmed by the tightening of American sanctions against Russia, which the American Minister of Finance said June 20. It is symbolic that the European Union at the same time, agreed to extend sanctions against the Kremlin.

So, the visit of the President of Ukraine in the USA, of course, would not entail a radical change in solving the Russian-Ukrainian conflict. In the hands of Vladimir Putin is still bigger maps than Peter Poroshenko, in particular, a strong army and a rich state Treasury. The Kremlin continues to support the puppet regimes in Luhansk and Donetsk. In this undeclared war in Eastern Ukraine continue to die and will die, soldiers and civilians. However, it appears that Moscow may not be able to break the resistance of Kiev, nor to convince the key players of the international community that they accepted the occupation of Ukrainian territory as a fait accompli.

Despite all the fears of the past months, Washington is not dancing to the Russian tune. In addition, strengthened the position of Paris and Berlin against Moscow. Yes, and the Kiev regime, despite all the internal problems with corruption and frail economy collapsed. On the contrary, he has recently received considerable encouragement in the form of a visa-free regime with the EU. Ukraine’s ability to give aggression back all the increases and support for the separatists every day demands from Putin’s money, which, of course, he could invest in another — for example, pensions, social benefits or useless in regional health care.

So it will be interesting to observe how and when the Russian power elite will start to lose loyalty to the Kremlin. How and when Russian voters will start to ask what good, in fact, brings them to current foreign policy? Are all those costs that are due to the aggression in Ukraine took on Russia and its population? Not called if an adventurous foreign policy and provoking psychosis of the besieged city only to disguise the corruption and incompetence of the Russian elite? And no harm if all this Russian national interests?