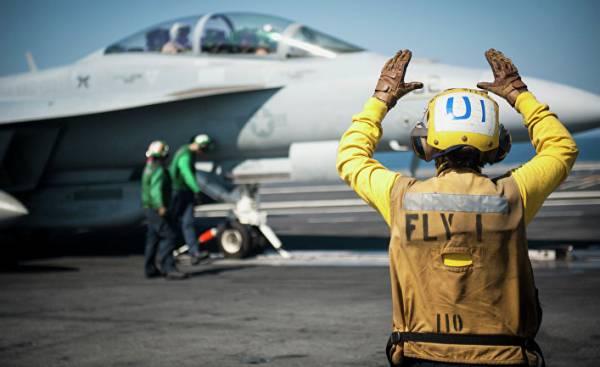 The fact that the US, the leader of the coalition, created to “fight” ISIS (banned in Russia — approx. ed.) has shot down a Syrian military aircraft, which carried out a combat mission against ISIS, indicates the beginning of a new stage in the Syrian crisis. And shooting down Iranian drone last day, the US has demonstrated a willingness to not only attack Syria but also all items which they believe, nourish hostility to “their allies in Syria.”

The US, which for six years of the crisis in Syria has avoided direct confrontation with Syria, have changed this position after 6 April 2017, Donald trump has struck a Syrian airbase “Sirat” on the basis of the use of chemical weapons. No matter what anyone said, and now the US is in a position of power, which is not “proxy war” in Syria, and directly involved in the fighting. First of all this attack — “open the attack” on a sovereign country. In response to this situation, Russia has ceased cooperation with the United States under the Memorandum about the incidents in the skies over Syria.

The basis on which the US shot down the plane, was that Syria attacked “their allies” (I mean here the forces of the Party “Democratic Union” (PYD) / people’s protection Units (YPG)). The US openly support the PYD / YPG did not hide that. The region where Kurdish forces have influence, in fact, is a “safe zone” for the United States. PYD / YPG — the main element of the new structure to be established there after the end of the crisis in Syria. Therefore, regardless of causing the Syrian army strikes on “Kurdish forces” or not, there should be no trace of the legitimate Syrian government. This region is so important to US that they can even go on confrontation with Turkey, its long time ally, and Russia.

It is no coincidence that this second U.S. attack against Syria is necessary at the time when they could further strengthen their relations with Saudi Arabia. Shooting down the Iranian UAV, the USA demonstrated a signal that now they are ready by force to support the anti-Iranian position of the Sunni countries, their allies in the middle East.

After the American attack there is a risk of spread of hostilities. USA, shooting down a Syrian plane, in fact started a war against Russia. But the United States did not take into account the following: if after the destruction of ISIS in the territories of the Caliphate, will remain areas where the forces of PYD / YPG have influence, it would imply the permanence of the scenario of partition of Syria. This event will further delay the war. It is known that Russia also does not want the presence of “independent” from Syria structures. Therefore, the confrontation with Syria (Russia) and the United States on the issue of governance liberated from ISIS regions will continue.

ISIS is not only fighting the coalition led by the United States. We all know that the Syrian army has provided significant support to the opposition Free Syrian army (FSA) and the forces of the PYD / YPG in their military action against ISIS. US know that too. But Syria and Russia against ISIS positions in those regions where forces of the PYD / YPG have influence, get stuck because of the United States. This obviously weakens the struggle against ISIS.

The decision of Australia, a member of antiepilepsy coalition to suspend flights over Syria shows that the statement made by Russia after the US shot down a Syrian military plane, “each aircraft entering the Syrian airspace, will be on sight” — not an empty threat. In the later stages of the war in Iraq, too, was the allies who took similar decisions. The latest events, the launch of which gave the United States can, as in the course of the war in Iraq, entail a split between the allies.

Despite Russia’s decision to stop sharing information with the United States in Syria, the United States said, “We keep communication channels with Russia open,” and this should be understood as a sign of the difference in approaches, which are said to exist between the administration of the tramp and the US army. Also remember the warning of the head of the General staff of US General Joseph Dunford (Joseph Dunford) that military methods will not be a solution in Syria.

Therefore, this attack should be seen as a “personal initiative” of trump. The US, despite the fact that they believed PYD / YPG as its ally, since Barack Obama did not engage in “armed conflict” in Syria. Noteworthy is the fact that the aggression of the trump in Syria came after the U.S. sale of weapons to Saudi Arabia worth billions of dollars. Clear as day that one of the conditions of implementation of this transaction, if not the first condition was the active position of the USA on the side of the Sunni front in Syria.

One of the likely consequences of a US attack may be the cooperation of Turkey and Syria against the forces of the PYD / YPG. Such cooperation would obviously support Iran and Russia.

United States, making steps that deepens the crisis, apparently, again not taking into account the dynamics in the region.

Threat convergence in the air

American channel Fox News reported that Russian military aircraft approached the American reconnaissance plane that had been conducting surveillance in the Baltic sea region, at a distance of five feet. American officials called the actions of the Russian aircraft “provocative”. In the message, which was filed as news last minute, it was expected that in a period of tension in relations between Russia and the United States on the basis of the destruction of the aircraft of the Syrian regime “threat convergence” could further raise tensions.