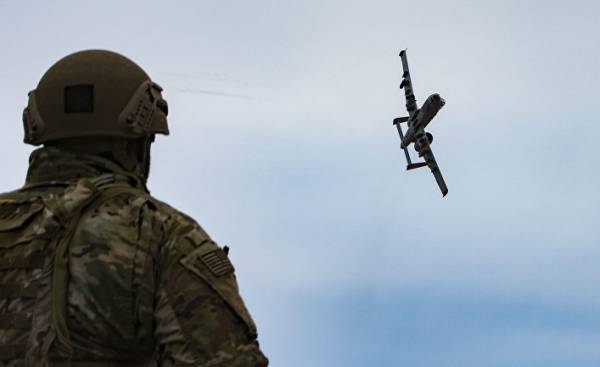 Last week, Russia announced that it managed to kill the leader of ISIS (a terrorist organization banned in Russia — approx. ed.) Abu Bakr al-Baghdadi (Abu Bakr al-Baghdadi) in the course of air strikes inflicted in may at Raqqa in Eastern Syria. Like many other reports on the elimination of the leader of ISIS, that statement may have been premature. Meanwhile, we open new fronts opposing forces face off in Syria and Iraq, and when the jihadist stronghold, raqqa and Mosul will fall and ISIS militants will be forced to withdraw from their territories, there will be real chaos. Now is the time to think about how the situation will develop further.

The probability of chaos, obviously, is growing exponentially, but there are suggestions on how you can fill the void that will be left by ISIS and other jihadist forces in Syria and Iraq, is extremely small.

The events at the weekend do not Bode well. Sunday, June 18, an American fighter jet shot down Syrian military aircraft. The Pentagon said that the plane was bombing too close to the position of the Syrian Kurds, which the coalition led by the USA considers strike force, able to dislodge ISIL fighters from Raqqa. Previously, there were three clashes in which the US air force attacked the troops Iranian-backed Assad regime in the South and East of Syria. The Americans called their actions self-defense and “protection troops”. Unlike the April missile strike President Donald trump by Assad’s forces is applied in response to the regime’s use of chemical weapons in rebel-held Idlib — which was accepted by an overwhelming majority of experts as an isolated case, we are now seeing something different.

Russia, whose intervention in the end of 2015, helped to change the course of the struggle in favor of Bashar al-Assad, which at the time threatened to defeat, warns that it is ready to strike at U.S. aircraft, more of “any air targets, including aircraft and unmanned vehicles international coalition discovered to the West of the Euphrates river”. Meanwhile, in the East of Syria, the skies and the battlefields are getting more crowded and dangerous.

As if to emphasize this, on Monday, June 19, Iran released six ballistic missiles in the direction held by ISIS militants in the city of Deir ez-Zor in Eastern Syria. Iran called it a response to the terrorist attacks of ISIL in Tehran. In a broader sense, it can be seen as a signal that the US and its Sunni allies led by Saudi Arabia — a signal that Iran intends to vigorously defend its presence on the Iraqi border with Syria. It is from here that the Islamic revolutionary guard Corps — and the groups that it sponsors, from the coalition to Iraqi Shiite militias “Hashd al-SHAABI” to the Lebanese “Hezbollah” — to gradually create a land corridor to the Mediterranean sea.

Meanwhile, the US insist on a narrow strategy for the coalition, which should, from their point of view, to be to defeat ISIS in Iraq and Syria: “the Coalition is committed to fight against the Syrian regime, or that Russian forces supporting partnerships with them”. This statement was made by the joint Central command of the US forces in Qatar, where the largest air base of USA in the middle East and 10 thousand American military. But it is worth mentioning that Saudi Arabia and its allies staged a blockade of its former ally, Qatar, to what they called Mr. trump, who considers this an integral part of the fight against “Islamic extremism” and attempts to isolate Iran.

Syria — six years later, its stunning brutality of the conflict unfolding on multiple fronts and involving many parties — is a country engulfed by chaos and actually split apart. But the uncertainty that surrounds its future, is largely due to the chaos in the White house.

All the other major external players are more or less certain goals. Russia seeks to regain superpower status equal to the United States, as well as leverage in Europe. Iran wants to strengthen its Shia axis, encompassing Iraq, Syria and Lebanon. Saudi Arabia and the Sunni camp want to stop Iran. Turkey is trying to stop the advance of the Syrian Kurds in Northern Syria.

Pretty hard to imagine something resembling a coherent U.S. policy toward Syria and the Middle East in General. American troops on the battlefield actually are allies of Iran and its intermediaries in Iraq; are in opposition towards Turkey, because they rely on the Syrian Kurds; and — after the Declaration made three months ago, that the U.S. will no longer insist on the departure of President Assad is on the brink of war with its troops in the East of Syria, supported by Iran. Add to this explosive mixture the attempts of Mr. trump to complicate the lives of Qatar, where the most important American military base in the region.

Weak attempts to soften the Syrian catastrophe has almost always come from Russia: tripartite (and ineffective) cease-fire agreement concluded with Iran and Turkey; launched in may, the proposal to create “zones of de-escalation”, which, however, was supposed to appear in areas where Assad’s forces were still met with strong resistance from the insurgents; and even the draft Constitution, involving decentralization of power. The United States is almost nothing offered. The common denominator in these three initiatives of Moscow, according to some Western diplomats, perhaps, is that President Vladimir Putin is trying to formulate a strategy for Russia’s withdrawal from Syria. If so, then Mr. trump is nothing he doesn’t help them.