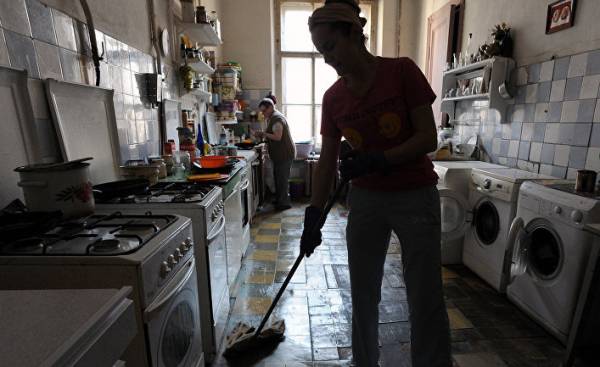 Cleaning schedule and tolerable neighbors have 34-year-old Oksana Rack. Rack buys as their first home 34-meter room in a communal apartment, where several families. She looked 26 rooms before finding a suitable one.

“I chose and neighbors. Wanted to avoid alcoholics. Saw that the neighbors are normal, and the apartment is clean.”

The ceiling height in the room is 3.6 meters, in the corner is a working tiled stove. Neva river embankment is a two-minute walk to Summer garden — five. For the room Rack paid 2.1 million rubles. For the same money you could buy a Studio apartment on the last metro station on the outskirts of St. Petersburg.

Rack — graph by profession, wanted to live in the historical centre, even if she had, together with other tenants to use the kitchen, bathroom and toilet. Her neighbours — the plumber, sales Director, ballet critic who moonlights as a waiter and historian, working as a receptionist. To renovate the room took one whole year. Rack thinks she’s very lucky.

“I live in a very beautiful place. However, it is impossible to take a bubble bath, because the bathroom is in a poor state,” says the Rack in its shining white room.

The rack — the only owner in this communal apartment. All her neighbors rented accommodation for 10-12 thousand rubles a month. Cheaper housing in the centre not to find.

In the Soviet era communal apartments in St. Petersburg the most common type of housing. Now, however, communal is considered a problem for cities: they are in poor condition and deprived of a person’s personal space. Nine years ago, the city adopted the programme for the elimination of communal apartments. Despite this, communal are constantly accommodating new residents: matured youth, people of creative professions, migrants and other disadvantaged sections of the population.

Currently tasked to get rid of communal apartments by 2020 and to increase the comfort of living of inhabitants of St.-Petersburg. In practice, this means moving into a high-rise estates. The timing of the program was already several times postponed, and this last one doesn’t look realistic. Almost no one wants to leave.

On the doorjamb there are four call. In the kitchen and corridor crammed four refrigerators and four washing machines. Home appliances at everyone, as all living your meter.

Neighbor Buck, a 32-year-old Marina Mikhailova, an unemployed ballet critic, came to the Rack for tea. In this apartment the neighbors visit each other’s homes, to modern communal a rarity. During the holidays the neighbors leave each other on the kitchen tables small gifts: for example, a bottle of detergent.

According to Buck, the cause of good relations lies in the fact that most of the tenants are my age and single people.

“The neighbors have changed. When I moved in, all behaved like strangers to each other.”

Mikhailov shoots in the communal furnished room, which is a bit like a house Museum. The previous tenant ripped Wallpaper, which was hung before the revolution. Mikhailov keeps them in a plastic bag.

At the time Mikhailov arrived in St. Petersburg from Ekaterinburg to study. Sleeping areas she didn’t like their sameness.

“The historic center of St. Petersburg is very important to me. Every day I feel happiness from the fact that had the opportunity to live here.”

In five-million Petersburg was 78 thousand communal apartments. They are usually located in the city centre in houses built at the turn of XIX-XX centuries. Officially they was 250 thousand families, but the real number of people nobody knows. About half of the rooms for rent, and tenants rarely appear in official statistics. 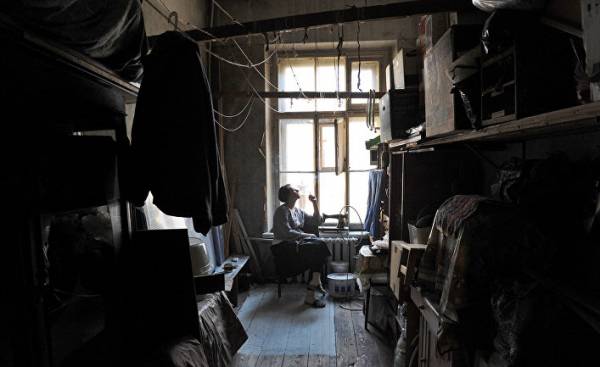 “I see no future in this room, this apartment, with these neighbors. No changes are anticipated. Nothing to repair. Everything remains the same,” Kokoreva working in two environmental organizations.

The couple did in your room the hallway and the kitchen. Of the common areas they use only tub and toilet, a condition which is sometimes annoying. However, the spouses themselves are not too often they are cleaned.

“In a communal, everyone only cares about their meters,” says Anisimov.

The four-room apartment co-resident, eight people of all ages. Next door lives a family from Azerbaijan, consisting of four people. The mother of the family works on a vegetable base. Kokoreva and Anisimov do not know the occupations of their neighbors, because their communication is largely confined to greetings.

“Our relations are the same as those of people traveling in the same train compartment. We’re going somewhere far away. We understand that we have to sit opposite each other more than a day or two, but we’re aliens” — paints a picture of Anisimov.

Anisimov and there would soon be “off the train”. Anisimov bought a Studio apartment in the neighborhood in the South of St. Petersburg in a newly built high-rises. The couple hopes to move this year. 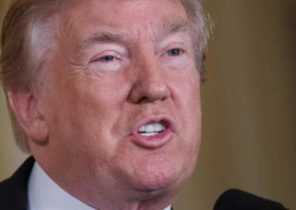 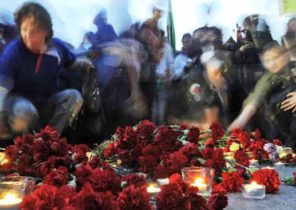