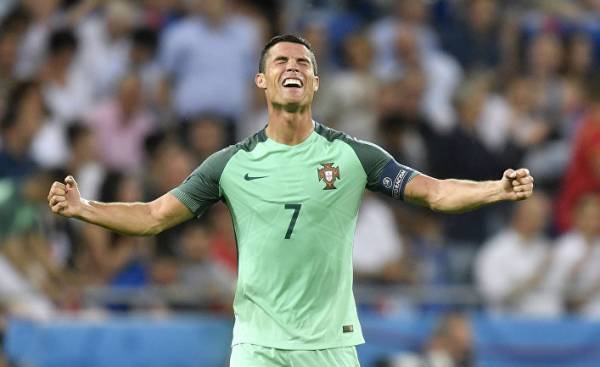 Portuguese national football team has never managed to win a “guest” in Russia, although such a chance struck her four times. Moreover, on account of the Portuguese is not a single goal, and the best that can boast national team’s goalless draw in 2005.

Although the national team is usually having difficulties on Russian soil, in the overall standings it shows quite good results: six wins, one draw and three defeats, including 14 goals and nine goals conceded.

The last match between Portugal and Russia took place in November 2015 in a friendly match, which took place in Krasnodar, ended with a home win 1-0.

Shirokov scored the only goal at the end of the match where the Portuguese team played without many key players. The game, in particular, were without Cristiano Ronaldo, forcing Fernando Santos to introduce four debutants.

In Moscow in the Soviet era, the Portuguese suffered a bitter defeat with the score 5-0 in a series of qualifying matches for the European tournament of 1984, and then, in 2012, experienced yet another debacle in the fight for a place in the 2014 world Cup. At the time, the game ended with the score 1-0.

Despite the Russian-Soviet nightmare, Portugal still managed to pass the qualification for the European championship in France and the world Cup in Brazil.

In 2005, during the qualifying competitions before the world Cup 2006 Portugal left Moscow with a goalless draw. This is the best a single goal — a result which the national team has achieved in this Eastern European country.

The situation changes radically when Portugal is playing at home: all three games that the Russians spent visiting the Portuguese national team, ended for them with defeat, including devastating, as happened in 2014 in the stadium Alvalade. The game ended with a score of 7-1.

During the meeting, Cristiano Ronaldo and Petit scored two goals each. Pauleta, Deco and simão also worked for the good of the national team in the match that brought the Portuguese national team one of the most significant victories in its history.

In 1983, Portugal beat the Soviet team at the estádio da Luz 1-0 (Gol Jordan), 30 years later there the Portuguese had another triumph with the same result. However, then, in 2013, the hero of the day was Helder Postiga.

In the final stages of Portugal always managed to stay ahead of the Soviet Union and its successor Russia. First it happened in the match for third and fourth place at the 1966 world championship in England (which ended 2-1), and then at Euro 2004 in Portugal, when in the group stage, the Portuguese team won 2-0.

At Wembley stadium in London, Eusebio goals, who scored from the penalty spot to the legend of Soviet football Lev Yashin, and Torrie almost on the final whistle secured the team third place, while at the estádio da Luz Maniche and Rui Costa helped Portugal to continue the fight in the European quarter-finals.

In 1972, in a friendly match, held in Belo Horizonte (Brazil), Portuguese national team thanks to the only goal of Jordan was able to reach the final of the “Cup of independence”.