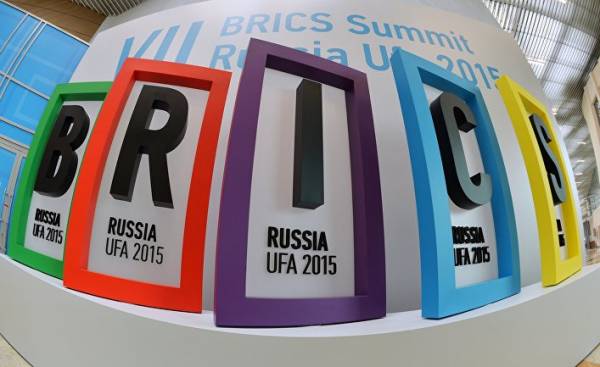 Investors in the emerging markets once again flock to the so-called BRIC countries (Brazil, Russia, India and China), and as a result monthly inflow of money and prices in the stock markets reached maximum values for the last almost two years. This happens based on the fact that the acceleration of the global economy will support demand for exports from these countries will contribute to increased consumption by the middle class and will help them to maintain financial performance.

Relying on measures taken by India to ease regulatory requirements on the economic recovery of Brazil, the stabilization of export prices of Russian oil, as well as on the more expensive Chinese currency, traders become more attentive to higher incomes in these countries, as well as more favorable prospects for the purchase of shares. This is an unexpected turn after they staged a 40-percent drop in the largest exchange traded Fund BRIC since the end of 2012 to early 2016, when Brazil lost its investment grade rating, China has slowed its meteoric speed, Russia’s revenues from oil sales fell sharply and the current account deficit of India has increased significantly.

“More acceptable fundamentals, attractive valuation and higher revenues for the hungry profits of the world which again makes the emerging markets attractive, including some of the BRIC markets”, — stressed in his sent by e-mail, Nystedt Jens (Jens Nystedt), the investment Manager Morgan Stanley Investment Management, which manages assets of $ 417 billion. The influx of non-resident portfolio investments in the BRIC countries reached to $ 166.5 billion dollars last month, while 12 months ago the outflow of capital amounted to 28.3 billion dollars. Such data are cited by the Institute of international Finance (Institute of International Finance) and company EPFR Global. In Chinese stocks was invested the largest amount in two years, whereas traders, according to Bloomberg, get Indian bonds at the fastest pace in almost three years.

Mark Mobius (Mark Mobius), Executive Chairman of Templeton Emerging Markets Group, give priority to Brazil, China and India, adding that Russia will also benefit from a recovery in growth. The Brazilian assets will be in a favorable position for the beginning of growth after two years of contraction, whereas Chinese investments will increase, since the international reserves of the country will start to grow after in January of this year reached the lowest level in the last six years. This opinion was expressed Steve hooker (Steve Hooker), who helps to manage assets worth $ 12 billion as an investment Manager for emerging markets at the company’s Newfleet Asset Management.

The most significant growth

During the decade ended December 30, 2012, shares of the emerging markets generated revenues in the amount of 17%, that is two times more than in developed countries. This situation changed during the period of reduced growth amid concerns about the fact that the “Fragile five” (Fragile Five), which included Brazil and India, will experience difficulties in obtaining the required large-scale external funding. Responding to the changed mood, Goldman Sachs Group Inc. in October of 2015 closed its Fund BRIC lost 88% of its assets since the peak of 2010.

Earlier this year, Goldman signaled a partial return, encouraging investors to “hold to the end” their bets against the currencies of Brazil, Russia and India. Meanwhile O’neill, who recently worked as commercial Secretary to the Treasury of the United Kingdom, said last month that fears of slowing economic growth in China “greatly exaggerated”. From his point of view, the world’s major theme is the growth of consumers in emerging markets, led growing like mushrooms after the rain, the Chinese middle class.

Initiated by Prime Minister Narendra modi’s measures to support economic growth and investment, over the next few years may turn this second populous country in one of the most dynamically developing markets. This view is expressed by Charles Knudsen (Charles Knudsen), who helps to manage assets in emerging markets in the amount of 16.5 billion dollar company T. Rowe Price Group Inc. from Baltimore. It is expected that this country, according to the median estimate of 37 economists under the supervision of the company Bloomberg, over the next three years will take the crown of China’s fastest-growing major economy.

Although the recent political crisis has made more than vague prospects of unpopular changes in the pension system of Brazil that, among other things, the establishment of a minimum age for retirement, the Forex traders like high real rate of interest and also the expected output from the most severe recession over the last century.

“You want a very bad scenario for the investment the community has made a significant and structural reduction, noted Arnab Das (Arnab Das) working in the London head of emerging markets, the major investment Fund of the Invesco Ltd., which manages assets worth 841 billion dollars. — Structurally difficult to be sufficiently invested in Brazil.”

The efforts made by Russia in the field of diversification aimed at reducing dependence on energy and commodities, will help, according to Mobius, to support growth after two years of reduction. While investors are unfairly pessimistic about China, where projected growth will exceed 6% in the next three years. “The reality is that this is a planned economy, and the government keeps under control the main banks and large companies, and just so there is no reason for the financial crisis,” said Mobius.

Although the assets of the emerging economies has grown rapidly in the past year (their stock markets increased by 25%, and currency added 7%), investors say there is still space for further growth. The MSCI index that tracks stocks in emerging markets rose on Monday (Singapore, 12:37) 0.6%, whereas indices currencies edged up 0.1 percent.

“This flow into emerging market funds are strong enough this year, but, in my opinion, investors have not gained the proper number of assets,” said Morgan Harting (Harting Morgan), portfolio Manager AllianceBernstein, which invest mainly in Asian stocks and Latin American debt.