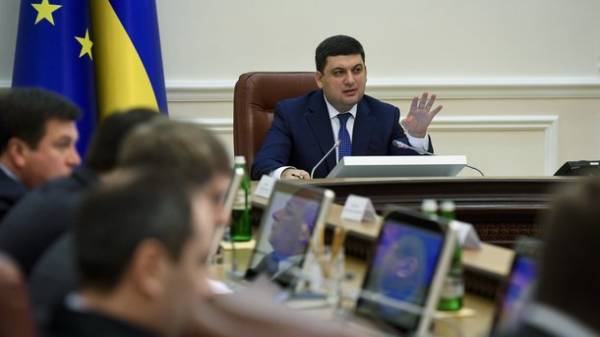 One of the MPs brought to the Prime Minister Volodymyr Groysman, a representative of the “headquarters of the blockade” of Donbass. This was told the head of the government.

“A few days ago I was approached by a representative of one of the parliamentary factions with a request to meet with a representative of the “headquarters of the blockade.” I met and explained the same thing what they say now – never received feedback. More than a week they are thinking about something”, – he said.

The Prime Minister put forward the blockade his proposal: to invite “the headquarters of the blockade” on the enterprise for a meeting with labor staff.

“Publicly address “the headquarters of the blockade”: I ask all the leaders of the blockade to visit all the companies that you actually put on the brink of destruction. It will be very proper to come into groups and to explain their actions, to explain the alternatives that you offer in order for the dialogue took place. Tens of thousands of Ukrainian families, which require an explanation from you. What are you doing, why are you doing this, who motivates you to do it, as you can see this situation developing in the future – in the medium or even short term in the next 8 months,” he said.

As earlier reported, Groisman said that the participants of the blockade of Donbass is playing up to Russiatrying to impose on Ukraine a strange scenario, but suffer from this, only the Ukrainians. However, he said that he knew the organizers of the blockade and realizes who’s helping them.