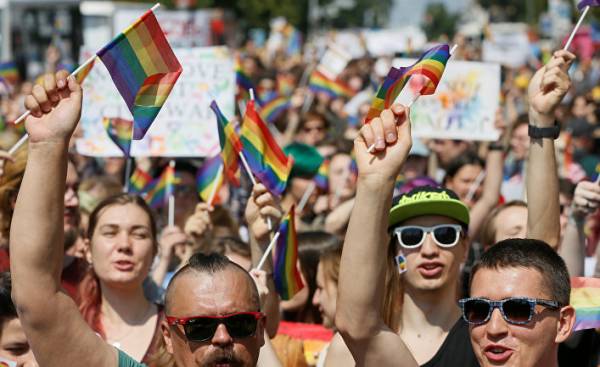 “March of equality” that the LGBT community for the fourth time organized in Kiev, never without provocation. This year’s clashes. But the capital “March” still far from large-scale European pride.

Worldwide as one of the methods of the struggle for equality and rights for LGBT people is used marches. The first March was held on June 28, 1970 in new York city on the anniversary Townvillage rebellion — rebellion against police raids on gay bars. The history of the Ukrainian “equality March” begins in 2012.

Ukrainian human rights activist, member of the Board “Kievprayd” Zoryan KIS says that while scheme participants was very conspiratorial: in small groups of 5-7 people were found at different subway stations, and then had to go to the metro station “Dnepr” — there, on the waterfront, it was planned to hold a March. But in the year since the attack from right-wing radicals pride did not take place. “Prior to 2012, I personally was against holding marches, then I thought it is very dangerous (in principle, this is true) and thought that the March would provoke excessive aggression, set up the society even more against us,” — said the defender.

In 2013, about 80 participants of the “Kievprayd” could pass a hundred meters by 2016, participants became more than six thousand, and the distance of the March was increased by a factor of up to a kilometer… “in the past year, I vividly saw that the aggression against us even works in our favor, because so many people came to the March because there were threats in our direction, and people came to protest against this violence,” said Zorian.

This year “Kievprayd” consisted of a variety of human rights activities — discussions, workshops, exhibitions and ended on Sunday, June 18, the “equality March” which involved people who support the idea of equality and pride slogan — “Ukraine is for all”. However, opponents of the event do not take into account this fact and from year to year, for some reason, call it a “gay parade”. This year was no exception.

Long before the day “x” opponents of the “equality March” has promised to block it by all means. Because, in their opinion, the March is “Ukrainophobia campaign, which is aimed against the Ukrainian culture”. And the “aggressive group of people” who “want to change the Constitution of Ukraine, article 51, which clearly States that marriage is the Union of a man and a woman.” In principle, such myths about the LGBT community in Ukraine — a dime a dozen. Most often, homophobic organizations insist that homosexuals are deepening demographic crisis, destroy the institution of the family, spreading HIV/AIDS…

Moreover, some of these organizations try to act in the style of his Russian fellow to insist on the adoption of the law banning “propaganda of homosexuality”. Recall that in Russia such a law exists, as there are encouraged by the government, attacks on members of the LGBT community, and even murder. Ukraine in this, as in many other matters — not Russia. It is true that we people with so-called gay can face discrimination when applying for employment, medical, educational and other institutions.

In addition, they lack a number of rights that a heterosexual couples — for example, can’t inherit property from their partner (even if you have lived together for dozens of years), have no right to make decisions regarding his health in the hospital, will not be able to obtain a death certificate of the partner and to bury him… the Most ardent opponents of the LGBT movement in Ukraine — organization calling itself nationalist.

So, on the eve of the “March of equality” they promised to the participants “homosexual” events of the war and threatened that “there is no support of the police will not help you”. On the night of June 18, press Secretary of “Right sector” (extremist and banned in Russia organization — approx. ed.) Artem Skoropadsky said that “…nationalists from many organizations, blocked the Park Shevchenko, Vladimirskaya street and House teachers, in order to prevent a gay parade in Kiev…”.

…A few hours before the “March of equality”, which was supposed to start at 10 a.m. in the area of Shevchenko Park, the road along which was provided in the route of the “March of Equality”, actually gathered a few dozen people. Of the total number of allocated young people with chevrons “Right sector” and the movement “Love against homosexuality”, dressed in identical white t-shirts. Every hour the number of participants in the “camp of opponents” gradually increased. But the situation remained calm — people talked, drank coffee, smoked, walked.

Before we start the “equality March” that rhythm was broken only once — someone came up with the rainbow flag — a symbol of the LGBT community. “Provocateur” immediately got from the activists of “Right sector”. And from the police. A few minutes — and from the conflict remain and a trace. According to the participants in the brawl, which communicated to UNIAN, “the provocateur, brought the flag, dragged the police.” And they, under the cries of “Glory to Ukraine” “Glory to Jesus” broke rainbow canvas to shreds, and the fragments burned.

One of the opponents of the “March of equality” Andrew shared with UNIAN their fears: “I am against this advertising and PR than they (the LGBT community — approx. ed.) are doing now. They’re going in schools lessons of tolerance to enter! What does that mean? From those lessons we are in ten years kids won’t be able to raise, say, I tell my son that the uncle (hereinafter obscene word for gay — approx. ed.) and he told me this: dad, ay-ay-ay, so it is impossible to say.”

“No one climbs under the covers to these people, they can do anything in my apartment, but to advertise it to our children… Parents need to react. We used to say that children are our future, but I’m sure it depends on us what future we leave for them” — it supports another party to the action “against the attack on the traditional family” Eugenia is a mother of four children.

“Only gave visa-free regime, and we began to learn from Europe is the worst — wedged into the conversation comrade Andrew. — While in Poland and Spain, Catholic countries, there is such lawlessness. And we have that same the left?”. One of the participants of the anti-pride Yuri at all convinced that the “March of equality” in society incite hostility to Ukrainian culture than “violates the Constitution of Ukraine”. “Five thousand people were declared Ukrainophobia in their demonstration. Formally, purely statistically, we assume that there are 2.5 thousands of men and 2.5 thousand women. Floor, irrespective of any manipulation of the human body was given by nature, and remains so to the end. So 2.5 thousand families in the framework of their shares is not established, and 3-3,5 thousand children are not born” — he said.

The organizers of the “March of equality” was really counting on for about five thousand participants. In fact they were, perhaps, less, but, against the previous Ukrainian pride, this was the most ambitious and colorful. Representatives of not only the LGBT community but also heterosexual people, came to the rally with rainbow flags, posters “Keep calm and be tolerant”, “Free and equal”, “human Rights first” in bright costumes.

Member of the TRANS-feminist action group “the adamant” the Tangar Forget came to the March dressed as the hero of the space Saga Guardians of the Galaxy, raccoon named “Rocket”. “My character symbolizes that intelligent being is something different from the others, may face discrimination. But if you have the mind, regardless of what he looks like, what the hell, someone’s going to discriminate,” he notes.

Bisexual and people with disabilities Daria wearing a superhero costume “Wonder woman” and were holding a poster “In the world there are no heroes, there we are.” “We must not sit idly by, but should achieve their rights and equal opportunities. The most important is the acceptance of society,” she said. According to Daria, like the marches do help to convey to society the idea of the importance of equality. “This is a public event. And we are thus publicly pronounces the problem, we show that the problem is, we are not silent about it,” she explains.

Rostislav came to support “Kievprayd” from Zaporozhye. According to him, came for the occasion. “We came to celebrate the diversity that at least one day of the year safely here so you can freely exit. To celebrate that I live in a country that should respect me,” he says. A holiday atmosphere like no other, creating some drag Queen divas. One of them is pink shock of hair a dress to match the hair — Jeanne Simeiz told UNIAN that “equality March” necessary to demonstrate the equality of rights for all: “We live in a democratic country and citizens should understand that all people should live in peace and friendship.”

However, some of the participants of the “March” a similar appeal was formulated as “Make love not civil war”, speaking out of ignorance? already famous thesis, promoted by Russian propaganda during the hybrid war. Anyway, the photo with this inscription after the parade caused a serious verbal battles in social networks.

Otherwise, a few point of run-ins with aggressive-minded representatives of right-wing nationalist organizations, could not spoil the “March of equality”. “A riot, kohai, right vdovy” “the Rights of the person of hope use” chanted the participants of the event. “Inside me — the joy and jubilation! I am proud of all the brave souls who came out today. I urge anyone who has not yet reached, waiting for you next year. We need you, because we came out and for your rights, too”, — shared his impressions of the day from Kiev UNIAN Inessa Gashinskaya.

According to her, really want to live up to the time when the “equality March” on the streets of the capital will have to withdraw 5 thousand police officers, and the participants are constantly worrying about their safety. “Guys, we live after all in a civilized society, depends on all of us, which we will create a country of our future” she said….

Unfortunately, just a few hours after the end of the “equality March”, a group of unknown attacked some of the participants in one of the districts of the capital. Seem to a civilized society, we continue to grow and grow.