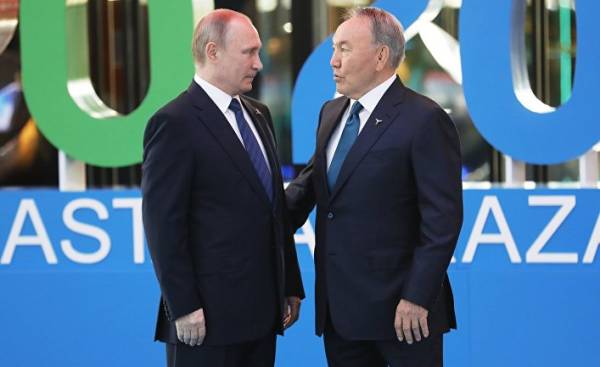 The opening of the Expo-2017 in Kazakhstan on Friday night again directs the fire of spotlights on the “leader of the nation” Nursultan Nazarbayev, who has ruled the country unchallenged since the collapse of the Soviet Union. And how many more years will remain on this post?

Nursultan Nazarbayev may RUB their hands with glee: the corruption scandals, the repeated delays and even the fall of the 240-ton design has not prevented the opening of Expo 2017, which on a large scale took place this Friday in Astana. Representatives from 115 countries, including the leaders of Russia and China Vladimir Putin and XI Jinping, gathered there to celebrate “energy of the future” (the theme of the exhibition) designated by the event of the vast area of 174 hectares.

The theme, of course, can bring a smile, if you think about the dependence of Kazakh economy on oil and uranium, however, the question now is not that. The fact that President Nursultan Nazarbayev of all good, to add luster to the image of his own country and himself.

“With 2000 years of Kazakhstan launched into a Grand adventure, to achieve recognition on the international stage, despite the lack of respect for human rights and democratic procedures,” — said the employee of the Kazakhstan Institute of management, Economics and forecasting Adil Nurmakov. Kazakhstan failed to win the right to host the winter Olympics in 2022 and world Cup 2026 and had to be consoled by the organization in 2017 the Winter Universiade, and the status of non-permanent member of the UN security Council.

The question cannot be called secondary, because, in addition to international prestige, at stake is the internal legitimacy of the President. After 25 years at the helm of the Nazarbayev still rules the country with an iron fist, and formed them around the cult’s emphasis on “prosperity and stability of the country. To celebrate a quarter century of presidency of Nazarbayev, the Kazakh deputies even suggested in November 2016 to rename the capital city Astana to Nursultan. The head of state modestly rejected the proposal of the parliamentarians, but did not resist the issue of new banknotes with his portrait.

After so long a tenure of the President is difficult to say the extent to which Nazarbayev formed Kazakhstan image. In 2014, Vladimir Putin said that his Kazakh colleague “made a unique thing — created a state on territory where the state never had”. Despite the economic crisis that followed the proclamation of independence in 1991, in 2000 years, Kazakhstan has managed to achieve impressive development, which strengthened the position of the Nazarbayev regime and offered Kazakhstan to the rank of the strongest economic powers in Central Asia. “Nursultan Nazarbayev — a man of vision. Although it may be, and the tyrant,” — said one European diplomat.

Moreover, the achievements of the President should be visible to all. Posters of Expo-2017 are hanging in even the most remote villages on a par with the posters of the “Strategy-2050”: this series of Nazarbayev’s principles must lead Kazakhstan to the club of 30 largest world economies (the country takes the 57th place).

“His grandmother sacrificed to Allah”

Low houses, Soviet monuments, the wells and on the horizon of the Kyrgyz mountains — all this Ushkonyr resembles any other village in the South of Kazakhstan. However, all is not so simple. Here there is no hint of broken roads, which are characteristic of this vast country with a population of 18 million people. Local track has recently been repaired. On the street that goes through his home village of President Nursultan Nazarbayev, is seen a plot of land with Foundation as a Museum to the glory of the first President of the Republic of Kazakhstan.

A little further on, opposite the named after his mother’s street, located the school named after Karasay Batyr, the Kazakh hero of the XVII century, whose direct descendant is Nursultan Nazarbayev, according to the official biography. The Director, Saulet Aitimbetov conducts a tour and tells the legend of the President: “When he was little, his grandmother sacrificed to Allah, to the President was a wise Minister of the Kazakh people. Thanks to him Kazakhstan has become a stable, independent and prosperous country.”

It builds a small group of students who read Patriotic poems, glorifying the most famous native of Ushkonyr.

So built a paternalistic system 76-year-old Nursultan Nazarbayev “leader of the nation” and “national hero”: this was given to him by the law of 2010 high-sounding title actually makes him President for life. The students at the school Karasai Batyr simply call him “Dad.” Held since 1995 constitutional reform allowed him to form a system without balances and separation of power.

In parallel with the capture of the institutions of the state Nursultan Nazarbayev methodically eliminated or subdued the opposition and the independent media. In 2015 he was re-elected for five years with a comical result in 97.7% of votes. “I’m sorry if these numbers seem unacceptable, but there was nothing I could do about it, the President said after the victory. If I affected the result, it would be undemocratic”.

With this highly personalized system it is difficult to imagine Kazakhstan without Nazarbayev. Whatever it was, at all on lips only one question: “h X” under which the Kazakhs mean day of death of the President. Recent years there have been persistent rumors about his health, especially after treatment abroad. When Nazarbayev sneezes, freezes the whole country. In October last year a report by his press service to cancel the state visit to Armenia due to the cold resulted in a series of a variety of speculation among observers. A month before the death of 78-year-old Uzbek dictator Islam Karimov, Nazarbayev did the last leader who keeps his post on the Soviet collapse.

The question seems especially pressing because the President apparently has no intention to leave power in life. Its current mandate runs until 2020, after which he could go to sixth period. In November, he said: “I will work until 2020. And we’ll see you again in 2020”.