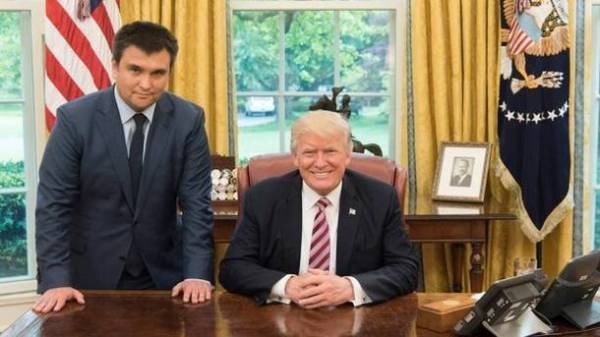 The Minister of foreign Affairs of Ukraine Pavlo Klimkin told about the meeting with the President of the United States of America Donald trump. He also said on the air “Breakfast with 1+1”.

“I went there (in the U.S. – Ed.) in order to participate in the Munich conference, there was my special ledge. By the way, Henry Kissinger (former U.S. Secretary of state Henry Kissinger – Ed.) it came to this speech was very interesting. But actually meeting with the President of the United States had during the visit, as was initially planned meeting with the Vice President. The meeting was very interesting, because when the Vice President went to the oval office – open doors, trump has finished the previous conversation, looked up, saw us and said, “come in, Come in” – said the Minister.

According to Klimkin, the President of the United States Donald trump’s “strong hand, he is the man who immediately goes to work”.

“That is, there were some individual conversations. Immediately asked: “what is the situation in Ukraine? How do you think?”. I told him first, then he said, what are the options? It was a very focused conversation. And I liked it very much. Immediately without any extra words, extra sentences,” said he.

Klimkin said that the trump seemed to him to a certain extent, an emotional man, but extremely focused, and a person who understands what he wants.

“He was prepared to talk. He knew what to ask, how to ask. And angazhirovana in this conversation. That is, it was not some sort of prepared system issues. He asked, listened and asked again or answered for himself,” added the Minister.

Recall, may 11, 2017, the President of the United States Donald trump took the White house of the Minister of foreign Affairs of Ukraine Pavlo Klimkin.