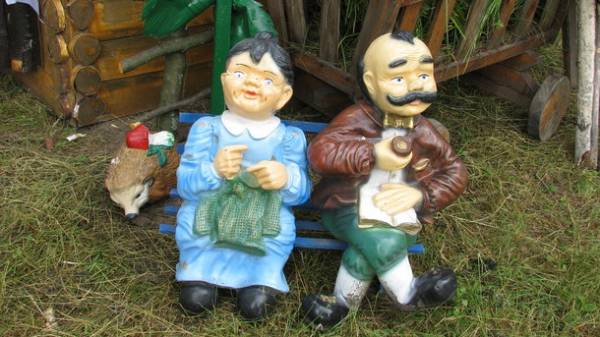 Pension reform in Ukraine is beginning to take real shape — Cabinet has approved the IMF and the world Bank. Now the turn of deputies, because, according to the Minister sotspolitiki Andrey Reva, there is little time left to begin the implementation of the government’s proposals. Experts hope that MPs will make it in time, but admit that the reform in its current form does not solve the main problem — the introduction of personal pension accounts for all Ukrainians already in 2018, as announced by the authorities earlier. 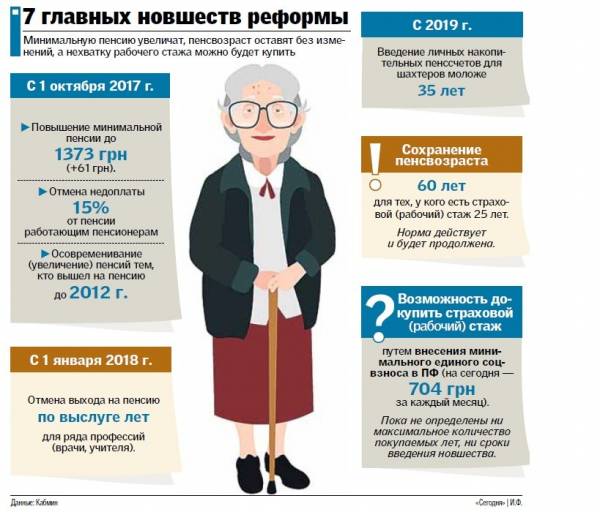 I HAVE. As you can see from the infographic, most of the proposals of the Cabinet improves the lives of citizens, as already retired, and working. For example, early on October 1, not December 1, as recorded while in the law on the state budget for 2017, increase the minimum pension. The Cabinet also promises to modernize, that is, to recalculate pensions using the formula for calculating the new average salary (3764 UAH, not 1197 UAH, since earnings in 8 years has grown significantly, and pensions) for those who retired before 2008.

This means that more than 9 million of the 12 million pensioners will receive a pension on average 600 UAH. The other day the Prime Minister Volodymyr Groysman gave a recent example: “If a painter with experience of 37 years receives a pension 2334 UAH, from 1 October it will 2961 UAH, or 600 UAH more.” Also from 1 October, will cease to hold 15% of pensions to working pensioners (from 295 to 1611 UAH monthly).

At the same time, analysts pay attention to the fact that those low-paid workers and current pensioners, whose pension does not fall short even to a minimum (they are paid by the state in the presence of pension seniority. — Ed.) pensions will not grow at all or their growth will be symbolic, and only due to extensive experience (40 years or more). Criticized by experts and the proposal of the Cabinet to be abolished from 1 January 2018 right of retirement for years of service (30 years of experience in the specialty) for a number of professions, the most numerous of them teachers and physicians.

WHAT’S NEXT. Despite the approval of the reform of the IMF, our government has not yet defined a clear plan of action. The Minister sotspolitiki Andrey Reva said that to start the reform from 1 October will not have time if Parliament before recess (until 15 July) will not have time to amend the legislation, allowing to start a pension reform.

That money to boost pensions will be, the government is confident. “In five months, the Pension Fund received in excess of the plan 11 billion UAH at the expense of increase twice the minimum wage”, — reported the Roar. To understand: this is enough money to pay pensions around 60% of pensioners during the month.

At the same time Vice-Prime Minister Pavlo Rozenko still insists that incretory should include the introduction of personal peschlow for all Ukrainians under the age of 35 years and 2018, and not only for young miners and 2019, as proposed by the Ministry of social policy.

EXPERTS: IN FACT, the AGE will RAISE the pension Experts are sure: the IMF and the world Bank agreed with the reform of the Cabinet, as in fact it raises the retirement age, gradually increasing experience of legal work required for a pension. And those who have experience will not retire when you earn or purchase experience.

“The increase in pensions took place from 1 October, you need to accept all changes before July 15, — the head of the social programs of the Institute for social and economic research Marianna Onufryk. But in General, incretory politicized, so the government will not be easy to convince Parliament to vote for this document”.

Ex-Deputy head PF Viktor Kolbun agree with this and insists on the early introduction of personal retirement accounts: “This is long-term money that can work for the Ukrainian economy. Will not “convenient time” for the introduction of personal pension accounts, so the sooner the authorities decide to do it, the cheaper it will cost. But finding the votes of the deputies even proposed version of reform will be difficult: one may not like it as too hard, others will call it cosmetic and will require improvement”.