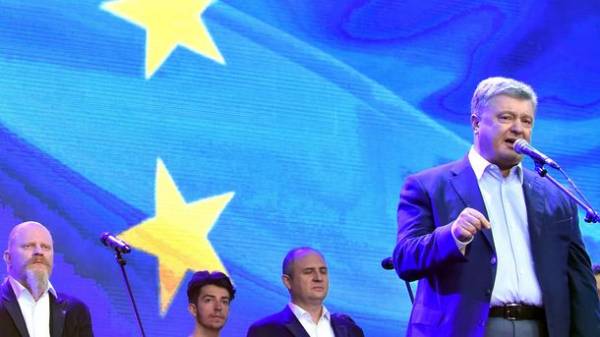 The President of Ukraine Petro Poroshenko stated so eloquently about a final rupture of Ukraine from the authoritarian “Russian world”.

“Farewell, unwashed Russia, country of slaves, the country gentlemen. And you, blue uniforms, and you, his faithful people – he quoted from the stage line from a poem by Russian poet Mikhail Lermontov during a speech at a gala concert on European square in Kyiv on the occasion of the abolition of the visa-free regime for Ukraine in the countries of the European Union.

“Farewell, unwashed Russia, country of slaves, the country gentlemen. And you, blue uniforms, and you, his faithful people,” writing kolis, Michael Lermontov

The President also appealed to the Russians who denounce Russian aggression against Ukraine, remembering the poem by Pushkin. “Comrade, believe: it will rise, captivating star of happiness. Russia vspryanet from sleep, and on the ruins of autocracy write your names,” – said Poroshenko.

In addition, Poroshenko said that the only thing that is disappointing is the extremely high price for freedom. “The only thing that upsets – is the super high price. It is the blood by which we Ukrainians put the Kremlin for our natural right to build their lives,” he said.

Recall that a visa-free regime with the EU begins to act for Ukraine at 00:01. The procedure for the entry regime in force will occur in four phases, depending on time zones of the countries of the EU.

Earlier it was reported that Poroshenko started the timer bezveza and said a final “farewell” of the Russian Empire. In addition, the President of Ukraine said that it was symbolic start bezveza with the EU on the eve of Day of Russia.