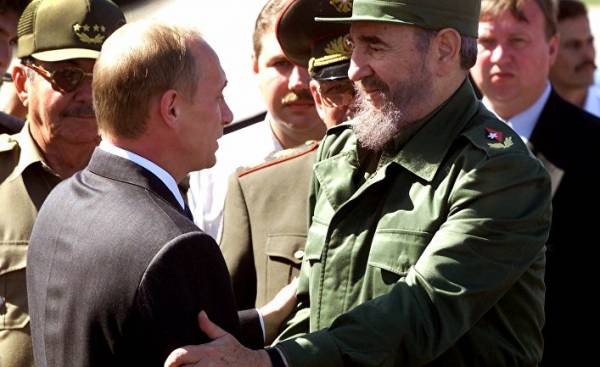 Watched excerpts of the film by Oliver stone about Putin. I found a movie about Kastro 2003. A long interview in both cases. In the frame in the main characters of the movies. Even some of the questions are repeated. For example, about gays. However, Fidel stone asked the question directly, not placing it with a gay “in the shower on a submarine,” and Castro says simply that prejudice was, now they are not.

In addition to stone, something else unites these two characters. Could not understand what. I looked once again. This is a General rather Moody, it’s in the details, in how the characters speak and how you holding up, not that they answer questions.

Stone shot Castro in 2003, when the commander was 77, of which 47 he was in power. Putin acted now, in the past two years, he was 63 and 64 years he was in power for 17 years. And one, and the other in the hands of absolute power. And for them it is familiar, the power belongs to them, it does not require them to prove anything, no need to fight for its renewal. They both live in complete certainty that this is forever, till death do them part. And as for family life, where as a rule at the twentieth year of marriage, The Thrill Is Gone, as he sang B. B. king — drive goes, the thrill is dulled, the excitement and the thrill to die down. They both Castro and Putin, boring and arrogant, their techniques and habits friendly and familiar, they are both not sexy. Stone creates comfortable space shots. When Castro says that the Vietnamese did not torture, the Director does not enter to dispute with him, when Putin says he is not a woman, so he has no bad days, stone is not surprised. And its heroes in a society of the interviewer relaxed advertising as my faithful electorate.

One is no more. Castro has lived up to the moment of separation from power and life. Putin is on the world screen June 12-15 (in Russian after a week), and June 15, he will be in a direct line with the electorate — just like he appeared in the film stone and how it happens from year to year in these essentially meaningless and purely fashion televstrecha with the country. Putin comes to life and captures emotion in a uncomfortable situation when he asked him the annoying question, when they continue to ask when I repeat it in the third and the fifth time, not giving away from the topic. Unlike our first interview with him 17 years ago, when in response to such questions, he was surprised, irritated, annoyed now he’s down with a touch of rudeness, the expression and the expressions otmachivajut nuisance, aggression and verbal attack on the stimulus.

And then this simplicity in a bad sense, all that naloxene, interior, hidden under his own portrait, which he has become, breaks out. In this short 11 minute interview Megyn Kelly is much more interesting hours of complimentary movie. She pulled out of Putin’s emotion destroyed the protective sheath, made to show that, already forgotten, blurry 17 years parade and the ceremonial shooting of a politician who by chance and some people got in power. He’s the same, only with the fingerprint of isolated from the real world ruler, who used to live in the most-favored-nation and confidence that only his word has value, regardless of whether it is true or false.

Castro and Putin in these two films share another — falling out of time. They are old and they are from the past. To some extent, as does the stone. No matter how much each of them years, no matter what physical shape they are, no matter how clever they are. Age is not a measure of divergence over time. Mentality — Yes, thinking patterns, sense of reality, ability to soberly assess the time and yourself in it.

This contrast of the past and the new was very noticeable in Paris at the meeting of Putin with a Macron. The emergence of new-generation politicians such as macron or canadian Trudeau, with their demeanor, young ease, nebesniy look ridiculous, unexpected moves and actions especially emphasizes the archaism frozen in power. Together with it cures a country that only need to every six years to confirm the legitimacy of the patron, is not interested in fact, neither the reforms nor the development nor the risks, but rather in the restrictions (not myself, of course), providing it is flat and smooth the way to eternity.

Navalny, who is a year older than the French President — the same unpleasant contrast but already in the country. And no matter what his electoral chances. And even not very important yet what he does and here it is: like it or not. The fact of the appearance of a young opposition candidate, charismatic, desperate, hunted, exposed to attacks, going against the system, speaking and demonstrating against the government — an unnecessary backdrop for the aging Patriarch, whatever one thinks of the conspiracy. The young have not yet learned to smoothly answer questions, he speaks the language of this century and uses the tools of this century. By their presence in the political space he’s challenging the establishment: “it’s Time to exit!”. He attracts attention, he has supporters and opponents, it is not indifferent, he is known and he is a serious threat to this “I came forever” version, which come up to Putin and those who Putin delivers a beautiful life. Old luxury for the elite says Navalny, “you” and thinks against him, but he was already talking to him, responds, threatens and spits in his direction. This recognition.

A new guy came in, he is, and others will catch up. It is their time. Neither good nor bad, it’s just so.

Putin does not Shine 47 years in power, like Castro. He started late. In all respects. And age, but most importantly — on time. He began his career of the leader at the turn of the century. New age is the quality rejects as rejects much of what seemed unshakable even 20 years ago. Stone recorded the passing of time. And in a movie about Castro and in the film about Putin. I think the author of the film sees it differently and tries in both films deal with their claims to their own country and its presidents. To understand the realities of those countries, whose leaders he walks to the camera, he’s not trying or doesn’t care. The Director of the film “the People vs. Larry Flynt” wonder how to live in an authoritarian country without a first amendment. The film “Nixon” wonder how to live in a country where the same President, whom he relieves, is not shining impeachment, no matter what he did. He is quite satisfied with the portrait in the foreground, which is not visible in the country.