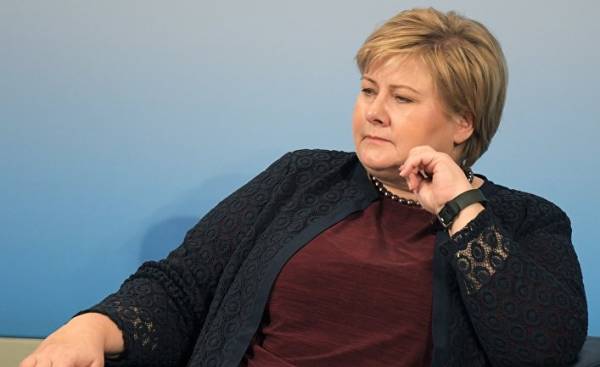 The guest of the program “Nemtsov.The interview” — the Prime Minister of Norway, Erna Solberg. Since 2004, she is the leader of the Conservative party, and in October 2013 was headed by the Norwegian government. Previously, Solberg criticized for the policy of excessive protection of business interests at the expense of social, but then she began to pay more attention to social problems.

The nickname “iron Erna” Solberg, has received from the media when he was Minister of communal economy in 2001-2005 in support of stricter migration policy of the country. In her opinion, Russia and Norway have a good partnership in the Arctic. However, in an interview with Jeanne Nemcova, the Prime Minister acknowledged that in recent years Moscow is unpredictable, and Norway should strengthen the protection of its military bases.

Deutsche Welle: Oslo plans to strengthen the defense capability of the Russian borders. Is Russia a threat to Norway?

Erna Solberg: Norway is not afraid of Russia. Our defense system will be aimed at protecting our military bases. Norway — the Northern flank of NATO must take the necessary precautions. Russia surpasses us in military capability, so our military bases should be protected. However, we do not think that Russia has the intention to attack us.

— Have you made the decision to host on its territory of elements of a NATO missile defence?

I’m not sure that Norway is part of NATO’s missile defence system. Decision on this matter is still pending. We are still exploring what contribution can make to the defense system of the Alliance. Now we place the air defense system around our bases, including in the North.

— The Ambassador of Russia in Norway have already reacted to these plans. He says that if you place a European missile defense system, Russia will respond, and it will be felt not only Norway, but also NATO. What kind of reaction do you expect from Russia?

— We have not changed its position on this issue. We are not talking about the missile defense system in Norway. We study whether our armed forces in the future to become part of a missile defense system of NATO. The Ambassador, of course, sets out the position of Russia on this score. However, the Alliance has already decided on AMD, and this is not directed against Russia. The system that we place to protect our bases, necessary only for defense.

— But who are you going to protect them?

— From anyone who potentially wants to attack us. We need to be confident that we will be able to defend themselves.

— Why is the reaction of the Ambassador is so provocative?

— I think this is the common position of Russia on the issue of missile defense system of NATO, but the facts to which he appeals, long known to the Russian side. No new decisions in Norway did not accept. We take seriously all statements, but I don’t think they have a reason. Like all other countries, we have the right to make independent decisions.

The Ambassador also spoke about the lack of dialogue between Russia and Norway on missile defense. Is it true?

Minister of foreign Affairs of Norway discussed at the talks with Sergey Lavrov. The Russian side raised this issue during bilateral meetings. However, Norway is a NATO member, and we make decisions on their own. We are open for dialogue with Russia on all issues related to defense. We inform Moscow that any military exercises that are going to hold, because we believe in the principles of openness and transparency and want to be predictable. While there were no new decisions at this stage, therefore no need for dialogue.

— The Baltic States, Finland and Sweden concerned about the intensification of Russian military activity. As Norwegian society perceives Russia as an enemy or as a partner?

— It is not perceived as the enemy. We have a positive partnership experience. We cooperate with the Russian authorities and we do it on mutually beneficial terms. We are talking about fisheries, joint rescue operations, contacts between citizens of our countries. For residents of border areas of Norway and Murmansk region a visa-free regime. We do not believe that Russia represents a direct threat to Norway, but we believe that its policy has become more unpredictable. And, of course, on the issue of sanctions, we are United with the rest of Europe, as to violate international law by occupying part of another country is unacceptable.

— You watched the show “Occupied”?

— Yes, I watched the beginning. However, the scenario is unrealistic. The EU has asked Russia to invade Norway, and Sweden agreed to this? I don’t think the Swedes can do with Norway.

— You mentioned the cooperation in the Arctic and believe that this is a good example of interaction. Recently in the newspaper the Times published a column by Edward Lucas. He writes that the region in the current environment is particularly vulnerable, as the disposal of Russia in the Arctic are 40 icebreakers, an increasing number of Russian polar stations. How do you assess this situation?

— Of course, we see that Russia is increasing its activity. But in the Arctic as the ice retreating to the North, and the region becomes more accessible to economic activities, the growing activity of the Russian Federation, and Norway. We hope that throughout the Arctic region the level of tension will be low, and the military presence is minimal. We see no reason to strengthen the military tension in the Arctic and hope to be able to resist.

— Norway is one of European leaders in oil production. Unlike Russia, the country has a low corruption, high standard of living. Norway occupies the top place in the ranking of countries with the happiest population. Some believe that oil is a curse for the economy. However, Norway is, apparently, an exception. You have democracy, and if you — one of the leaders in the export of oil.

One of the main reasons lies in the fact that Norway was a developed democracy, before we began to extract oil. The Norwegians built a state of law, and we are at that stage was lucky with the political leadership. It followed that the decision-making process was transparent, so it’s clear who gets licenses, and how to control it. It is predictable, a good system, because it reduces opportunities for corruption.

Of course, there may have been isolated incidents. It is naive to assume that they never will be. But I think that the presence of democratic control — and we list oil money in a sovereign Fund, not directly to the budget of the country — allows us to better monitor how it affects the state of our economy. This approach will ensure future generations will enable them to receive the income from oil resources because we’re saving them money.

— Do I understand correctly: first democracy, then oil?

— Yes, we first became a democratic state and it was easier. Many States with large reserves of natural resources are faced with increasing corruption and lack of transparency. We are also working with countries around the world. Trying to teach them how to create a system that ensures that society will not be harmed because of the excess of petrodollars.

— The government pension Fund of Norway, the largest sovereign Fund in the world. He invests in assets across the globe. The amount of the Fund is equal to two of the country’s GDP. How can it contribute to economic growth in the country?

— There are two aspects that affect our growth and are associated with the oil revenues into the economy. First, the primary sector is a source of employment. People get salaries, pay taxes. This increases the inflow of funds in the economy and social sphere of Norway. Second, we use part of the income from investments. We had a rule that the budget comes annually, four percent of the Fund’s assets.

We have now decided to lower this figure to three percent. The eighth part of the budget is now formed at the expense of the sovereign Fund. This, of course, helps us maintain schools, to keep taxes at a lower level than in other countries. Because of this we have a quality pension system, and probably in General more perfect society.

— But you are talking about social well-being, and I ask about the opportunities for investment in the country?

— Of course, we put a lot of funds from the budget. We have the biggest spending on roads and infrastructure in recent years. We just submitted a big investment plan for 12 years for the construction of roads, development of railway transport and infrastructure.

In September you will hold parliamentary elections. Is it possible to intervene on the part of Russia?

— Until we felt this. We monitor this, because I saw what was happening in France and in the United States. Of course, Norway is not a large country, and our political life is less polarized. So seriously benefit from attempts to influence our political system will not succeed. However, we inform all parties about the need to take measures against cyberattacks.

Perhaps the most important is that you as a politician was aware that the content of your email may one day get on the front page of Newspapers. So you should think about what you do and say. Another aspect is our voting system. We are constantly working to minimize its vulnerability. To avoid any concerns that a possible fraud.

It recalls that before the advent of refrigerators there are other ways of storing food. To caught summer fish remained suitable for food, its dried and salted. Such was tradition in the colder regions of the country. Today in Oslo, lutefisk is a very popular exotic dish for tourists. But before it is not really eaten. I am originally from the West coast, where it was considered traditional. However, I didn’t like it.

— Norway shares borders with the Murmansk region. There is a small town of Teriberka. In “the New newspaper” recently published an article about the sorry state of roads and infrastructure in the city. One resident said, “Russia, please, give us Norway”. Are you surprised by this desire?

— No, I think border cooperation is truly a beautiful thing. Before that for a long time from Northern areas of Norway it was impossible to get to Russia and Vice versa. On both sides of the border, the population density was high. Before the Second world war, many residents supported the communication, were familiar with each other, and then were separated for many years. There are mixed marriages, economic activity on both sides increased. In 90-e years many Russians earn a living in the Norwegian fisheries.

I understand their desire to have roads have been built, repaired infrastructure. I think it is important to invest in the regions and hope that the economy in the Northern regions will be developed. The Norwegian economy has also shifted to the North due to oil and gas production. Very actively growing the number of tourists — both winter and summer. People want to see the Northern lights, enjoy the whales, there are still many other activities. Cooperation with Russia is integral part of the economic agenda of the Northern countries.

But this woman wants to Teriberka became part of Norway.

— I don’t think we are going to do the border shuffle. We resolved all disputes with Russia on this matter, including the sea, and are glad that they have in the past.