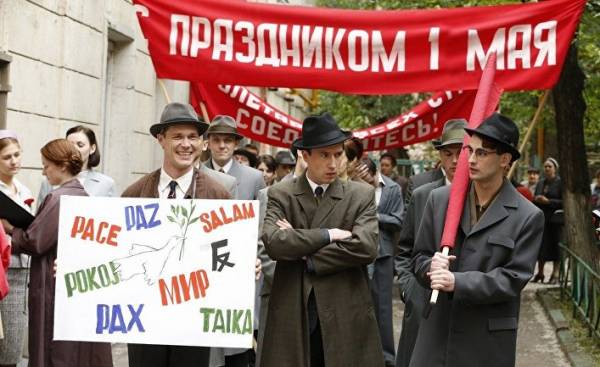 The game once again seems almost lost — employees of the U.S. coast guard was removed from the water a dozen Soviet sailors whose ship was wrecked near the shore. This story finds working in Moscow correspondent of the newspaper New York Times. He had already managed to track down the mother of one of the survivors of the shipwrecked sailors; it is trusting a woman living in a squalid wooden house in the countryside, he opens wide its doors and soul. It will be a touching story with the continuation scenario of the cold war — about the poor people who were glad to escape from the Soviet Union and who have only one desire — to stay in the West, in the land of promise, in the United States.

However, Grigoriy Biryukov and this time manages to give a new twist to this story — this ambitious head of information-analytical group of the Ministry of foreign Affairs of the USSR sits in heading to new York the plane next to this American journalist, and sipping whiskey, tells him a sad story about shipwrecked sailors had already tortured by the KGB at the Soviet Embassy in Washington, and now all they need to prepare for life in a Siberian prison camp. When the article describing the horrors of the bloodthirsty Soviet regime, published the next day in the newspaper, the Soviet Ambassador on a hastily convened press conference is located in good health, rested and dressed in elegant costumes of the sailors. They all rejoice that soon will go home, and on the question of torture, they only smile in response. But hurry, the correspondent turns out to be a liar, more recently, they admired his colleagues, and now they mocked him.

The confrontation between East and West, as well as the struggle between truth and manipulation — this is all extremely relevant. Didn’t we recently observed something similar during a game of hide and seek about Russian soldiers in Ukraine? You can remember as “fake news”, as well as the role played by the main Russian diplomat in the fictional stories about the Berlin girl Lisa. It is now possible to consider such examples with some historical distance in the television series state TV and radio company, VGTRK.

The action in it takes place in 1960, i.e. at the time when the result of the rivalry between the two systems has not yet been determined. In this competition the Soviet Union with the first satellite and first man in space, even for a short time becomes the leader. In the television series “the Optimists” tells young diplomats ahead of his time, is a pretty, well-dressed, motivated people who strive to make their country received a well-deserved reputation in the world. First shown in April series was so successful that the winter will be showing new pieces.

The Russian foreign Minister praised about this series. But, according to him, the diplomatic life is not as exotic.

Seven years later, after Stalin’s death the Ministry gathered representatives of the progressive elite of the epoch of the thaw — graduates of MGIMO, the Moscow forge diplomats, and they all have some connection with the West and therefore understand what drives the enemy. One of the heroes of the film — the son of Russian immigrants, he was born in Paris, and his parents, full of hope, returned to his homeland after the Second world war and immediately came to the camp. But he rejects them and starts a party career. And there are the expert on Cuba who grew up among the orphans in the orphanage, who after the civil war in Spain came to the Soviet Union. No one pays attention to ideas of “young and wild”, yet among them is not having a secular experience of a Scotch Grigoriy Biryukov. He’s not a very high opinion about his new team, but he is driven by ambition.

Following the example of the “Mad men” (Mad Men), audience Optimists take a nostalgic journey to the 1960-ies. Biryukov externally — a kind of don Draper (Don Draper) of Soviet diplomacy. Of course, Moscow Ministry of foreign Affairs is not an advertising Agency in new York, but, nevertheless, there we are talking about making something to sell. We are talking about the PR of the largest country in the world, a country that is opposed to the Western camp. And while all look quite unofficially, Horny glasses, hairstyles with Bobby pins, partings and lipstick, elegant dresses and suits existed in the Eastern bloc.

This corresponds to the trend. Three years ago, according to the state “First” channel was showing the TV series “the Thaw” about the period after the end of Stalin’s dictatorship, when writers, artists and musicians have regained courage, and began a period of flourishing culture. Even the head of the party, Nikita Khrushchev returned home impressed by his visit to the United States and Soviet society first became acquainted with the culture of consumption. Optimists skeptical about trying Pepsi-Cola and listen to the first bars of beat music.

After all 13 episodes of the first season may have created an impression that there was not much difference between the West and the East. All use the same tricks, and in the end we are talking about who is better has been working with the public. And what is the model of the West or the Soviet — receives the advantage, shall be determined by a skill art to negotiate and propaganda. If all the people in the Soviet Union were so elegant optimistic as Biryukov — who knows what would have ended the cold war.

The Russian foreign Minister praised about this show after it starts to show in April. The life of a diplomat is not as exotic as it is shown in the film, but if this series will encourage even more young people interested in this profession, that is good, he said. According to him, the leading man can’t actually on the screen to sit together with their partners. “Any and all writing some papers, or speak incomprehensible to normal human language. It would be boring”, he added.

Re-heated the conflict between East and West, this recurring plot, tinted reality of the 1960-ies in the style of candy wrappers — all this, of course, to the Russian state television. But if you compare it with the hysterical tone that dominated the news and talk shows, series producer Alexei Popogrebsky pleasantly surprised by its tranquility and delicacy. Perhaps this is due to the fact that his idea originated in 2010, i.e. long before the confrontation between East and West flared up again because of the war in Ukraine. The original idea was to show the style of the time, says one of the authors Michael Idov. For this, of course, is to get acquainted with this series — even if you do not know the Russian language.

In India there was a deadly collision, killing 11 people