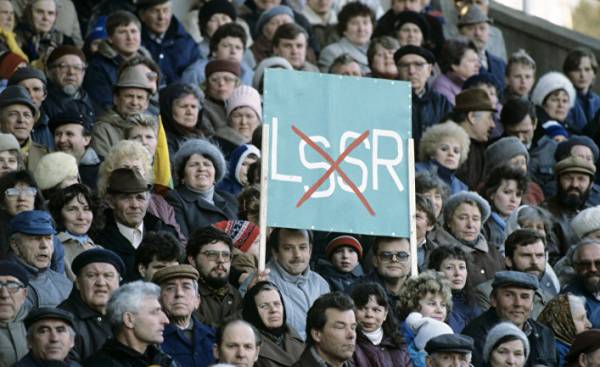 Historian, rector of the Vidzeme higher school Gatis krūmiņš commented on the statements of the Ambassador of Russia in Lithuania, a former Russian Ambassador to Latvia Alexander Udaltsov about the fact that Russia should compensate Lithuania for damage caused by the occupation, and Lithuania owe Russia $ 72 billion over the Soviet period.

“The Baltic States regained their independence more than a quarter century ago. After the restoration of independence they had to overcome the hard process of transformation of the economy, which has largely been caused by economic policy, which the Soviet Union imposed the Baltic States for nearly half a century of occupation. The Baltic States were forced to integrate into the economic space of the Soviet Union, and their economy had to implement the priorities of the Union, and not themselves these States.

In Soviet times, the society was misled about the economic policy of the USSR in the Baltic States. It created the false impression that the Baltic States have invested significant funds and that the Baltic countries were developed thanks to these investments the USSR. These are created in Soviet times, the myths continue to support also some circles in Russia today, and the recent statement of Russian Ambassador to Lithuania Alexander Udaltsov is part of this approach.

In turn, studies based on archival documents that prove the opposite — the Baltic States has paid to the budget of the USSR, a much larger amount than it received back. About Latvia this question was investigated in detail, the information published in the recently released History of the national economy of Latvia and on the Internet resources, including in Russian. To what extent are based on the documents of the study are contrasted with constructed in the Soviet era myths that are still supported, reflects the short film “Store permanently”. Documents from Lithuania also indicate that the priorities of the USSR was not the socio-economic development of the area.

For example, in 40 years, in the period after the Second world war, the Soviet Union in Lithuania much more funds spent on suppression of the national resistance movement than for investments in the national economy. The total expenditure of the Ministry of internal Affairs and the Ministry of state security of the USSR in Lithuania in the late 40-ies exceeded half a billion rubles (more than in Latvia and Estonia combined), and Lithuania and Latvia, was a donor to the General economy of the Soviet Union. Lithuania in this period contributed to the budget of the USSR on 5 — 6% more than the budget of the USSR were spent in Lithuania (and should note that these funds also included the cost mentioned repressive ministries of the USSR, exceeds 20 per cent of total expenditure in Lithuania!).

In General, the major expenditures of the USSR in the Baltic States was associated with military spending and repressive institutions, and once again — all three Baltic States were donors of the overall economic system of the USSR — they were made in the budget of the USSR, a much larger amount than it receives back in the form of centralized investment. Maintaining various myths that spread is not based on facts, information, questioning the long-term prospects of the Baltic States in the past, is very beneficial to those who want to see the successful development of the Baltic States in the future. Those who live in illusions that he would return the Soviet era, when the peoples of Central Europe will be brought to its knees before a totalitarian power”.