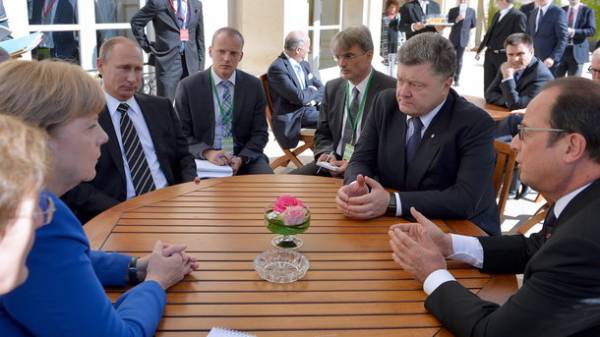 Tuesday marks exactly three years since the first meeting of “Norman Quartet”, the main negotiating platform for the conflict in the Donbass. “Today” has learned about the main achievements of the format and its future.

“D-DAY”. For the first time the leaders of the four countries (Ukraine, Germany, France and Russia) met on 6 June in the French town of Bénouville in celebration of the 70th anniversary of disembarkation of allies in anti-Hitler coalition in Normandy, known around the world as “D-Day”. Then, during the first meeting of President Petro Poroshenko and Russian leader Vladimir Putin, the sides discussed the conflict in the Donbas and its economic consequences for Ukraine. In the end of the “channel four” came to the conclusion that the situation can be solved only by peaceful and political means. Experts believe that, despite a rare meeting of the heads of States (for the last three years, there were only five), the format managed to achieve two most important in the conflict of the agreements of the Minsk agreements. So, according to political analyst Vladimir Fesenko, the negotiations, though not stopped fighting, but kept further aggression from the Russian Federation. “Merit “Norman Quartet” is not only that it has issued legal field around the conflict by using the first and second “Minsk”. In my opinion, it is more important that the States of the Quartet during several rounds of negotiations, recognized Russia as the aggressor,” — said the head of the Maidan of foreign Affairs Bohdan Yaremenko.

ITEM number 13. Talking about the future of the “Normandy format” Yaremenko noted: the probability of rejection is extremely small. “Any change to the format now possible — all the participants already stated that he will remain in the current, and the USA — which is not yet ready to join, — said the expert on international Affairs Andrew Buzarov. — New blood pour may the newly elected President of France Emmanuel macron. But, in my opinion, it will help to step it up in terms of meetings but not in decision making”. After another summit in Italy, the commitment to the “channel format” declared the leaders of the G7 countries in the thirteenth paragraph of his final communiqué: “the Conflict in Ukraine can only be resolved in full implementation of the Minsk agreements. We support the efforts of the “Normandy group” and the OSCE in matters of de-escalation of the crisis.”

Military experts about negotiations: “there are both pluses and minuses”

Last meeting “channel four” took place in Berlin, 30 may, and was presented to the country’s Deputy foreign Ministers. At this Deputy head of our Ministry of foreign Affairs Vadym Prystayko said: the Ukrainian side has proposed to declare the next “silent mode”. According to him, this is the tenth time offered a truce. In this regard, “Today” decided to find out what they think about the work of the Quartet military experts. Former Deputy head of General staff Igor Romanenko evaluates the success of the format are kept: “to Negotiate a cease-fire does not work, so in the future, major progress is not expected. You need to go to a higher level, strategic. To the level where will be the United States”. In turn, the Director of military programs Razumkov Center Nicholas Sungurovsky says about the pros and the cons of the format: “Positive I can name that has managed to reduce the risk of deploying large-scale aggression against Ukraine and to bring Russia to the negotiating table. But the downside is that the negotiations have stalled. While we hope that the conflict can be resolved through political means. The war itself, the conflict is the defeat of diplomacy.”