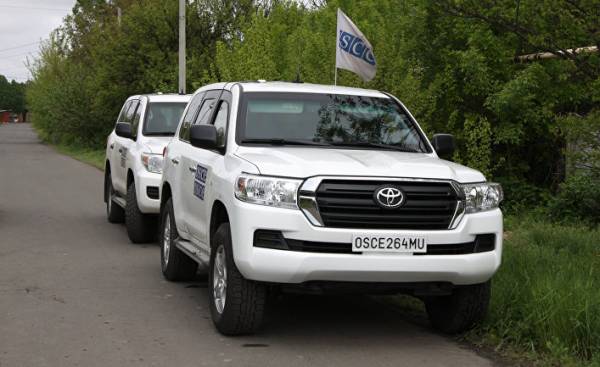 The situation in the East of Ukraine, where Russian forces since the “reversal” of Ukraine to the West in 2014 are interventional war that claimed the lives of over a dozen thousand people in the last six months has seriously deteriorated. There now kill more civilians than a year ago. Agreed in Minsk truce, which was to stop the bloodshed, disturbed more and more often, and the suffering of the people has increased even more in connection with the aggravation of the economic war between the occupied territories and the rest of Ukraine.

In this scenario, both sides are to blame. Deputy head of the OSCE mission, the Swiss Alexander hug (Alexander Hug) said in an interview with our newspaper that the growing number of violations of the ceasefire (more than a thousand cases a day, and from January to may, it has doubled compared to the same period in 2016) is due, primarily, to the fact that Ukrainian and Pro-Russian fighters are too close to each other. In addition, in many places used the heavy weapons whose use is prohibited by the accords.

In such cases, the agreement violates both sides. Because immediately react to the “belligerent actions” of the opposite side. And one violation of the truce immediately entails the following. In total, according to the BBC, in the first five months of this year killed 44 civilians and injured 188. In other words, it is about 232 casualties, whereas from January to may 2016, the number was “only” 110. Statistics on military casualties, the OSCE mission has not.

But even if the deterioration of the situation both sides are guilty of the conflict, there is one aspect in which the fault lies primarily on the Pro-Russian forces: violence against unarmed members of the OSCE mission to monitor the situation in the East of Ukraine in 2014. In April occurred the first incident with a deadly outcome for the OSCE representative when the armored SUV of the organization hit a mine on the territory controlled by Pro-Russian militants.

I must say that from the beginning of the war, both sides prevented the OSCE staff, threatened them and fired at them. It is clear that none of the parties is not interested in the fact that the observers recorded their violations of the peace agreements, so that units of the OSCE in the past few months has repeatedly had to face opposition from both Ukrainian soldiers and Pro-Russian militia. However, there is a very significant difference. “Armed groups on the territory of the so-called Donetsk and Luhansk people’s Republics prevented our observers are much more aggressive,” said hug. If the Ukrainians are just not allowed to drive the representatives of the OSCE, Pro-Russian rebels often were serious incidents.

So, from the reports of observers, it follows that since January this year, their patrols about ten times were attacked with small arms or hand grenades, and almost always came from Pro-Russian militias. And never guilty there were Ukrainian soldiers, although in some cases an ambiguous situation, and observers could not determine exactly who was shooting at him, and was nearby artillery rounds directed against them. However, in many cases, all apparently happened when the observers were patrolling the occupied Pro-Russian forces of the territory, on them from a passing truck threw a grenade and formerly “only” a smoke grenade.

Then armed separatists chanted against observers of the threat, and if they were women, and sexist insults. Then the separatists took a fighting stance and began to shoot at the car of the OSCE, which was trying to hide the observers. Still drunk fighters could throw himself under the wheels of the car with the monitors and stop him. Similar cases were described in the reports of OSCE repeatedly. Often, the separatists fired on the observers “only” to intimidate, but sometimes (for example, 17 March) they opened on them fire, so that the representatives of the OSCE literally heard the whistle of shells.

Says a lot about what this increase of aggression is not accidental, and is probably part of a plan under which Russian “satellite regimes” in Eastern Ukraine are trying to paralyze the activities of the OSCE. In some places this has been happening for a long time. Although the Minsk agreements provide for unhindered access of observers to the territory of Ukraine, Moscow and its henchmen was not originally given and do not give them the opportunity to control the situation in the border areas with Russia.

Them there is simply not pass, and they have no opportunity to see to what extent Russia sends to the conflict-ridden areas of military equipment. Moscow denies it, but Kiev and its Western allies believe that the separatists are receiving arms in the first place, that way. One of the few checkpoints, the OSCE, the presence of which make up the militants, observers daily hear the sound of the trains passing by. Moreover, these rails they are not visible, so they can’t know what exactly transported these trains.

In a single document may fall into the hands of representatives of the mission, said that perhaps the rest of the territory, occupied by Russia, the OSCE will also be impossible in full. It contains directives to the DNR Pro-Russian, according to which the fighters are required to stop any patrols of OSCE and allow them to move only in the “scheduled routes”, which is a clear violation of the Minsk agreements. If the orders will actually be implemented, the mission will be paralyzed in all the occupied territories, and observers will not be able to register ceasefire violations by the separatists.

Then the Minsk agreement, in their current form signed by the presidents of France, Russia and Ukraine, as well as Chancellor of Germany, will be “in a coma”. The war, which has now been significantly “suppress”, in any case, it inflames with new force. Political and economic agreements and have not received a real practice. And if Moscow will now allow his “shadow army” in Ukraine to paralyze the activities of the OSCE mission from Minsk agreements and does nothing.