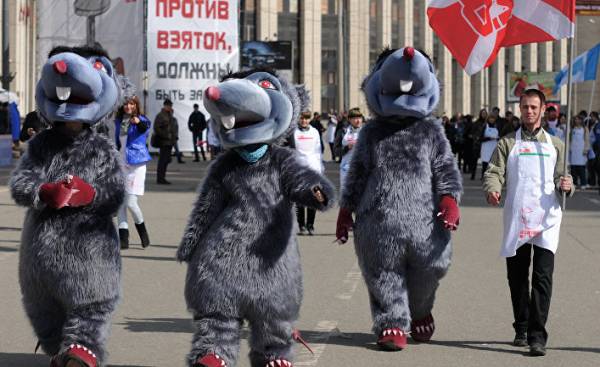 Last time in Russia often speak about anti-corruption processes in respect of the political elite and senior officials. Bribe give and take at all levels of Russian society, they have become a daily occurrence in the lives of citizens.

Every year, corruption kills hundreds of billions of euros. In addition, it prevents the development of democracy and legal state.

Many Russians feel that not so very simple to solve everyday problems, if you do not give a bribe. However, the attitude towards corruption is still unchanged.

According to the Deputy head of the organization Transparency International Elena Panfilova, the Russians are clearly aware of the harm corruption. The idea of a bribe pushes harder.

Changes come from the younger generation.

And yet in the list of least corrupt countries Russia adjacent to Ukraine. Transparency International has put these countries in the corruption perception Index-2016 131 place out of 176. Finland is on the list in third place.

The Russians are faced with corruption at different stages of his life.

The Russians most likely are ready to bribe, when it comes to your own health or the health of loved ones. For example, you are trying to quickly do the ultrasound or get better service.

After childbirth, many feel obliged to give the doctor and obstetricians of money or other gifts for their work.

2. Place in a kindergarten

Authorities are trying to reduce the possibility of bribe with the help of an electronic queue. However, money still plays a role, if you want to get a place in a kindergarten. In Moscow this amount can be several hundred euros.

In Russian schools teachers are paid extra lessons with the students. In Russia now, a discussion about how teachers intentionally lower the rating of his disciples to get sufficient number of students for virtually mandatory paid extra lessons.

In order to get a higher education institution is required to pay a bribe of several thousand euros. Before many students were willing to pay for the exams and coursework. Even buying a diploma was not something impossible.

Many young people are willing to pay very large sums for evading compulsory military service. Since corruption during conscription began to attract too much attention, the question is trying to settle in less open ways, for example, buying the necessary medical certificate.

6. Rights or other documents

Corruption is rampant in state and municipal administration, when the citizens trying to expedite the receipt of various instruments or their design. We can talk about driver’s license, building permit or any other official document.

7. Payment of fines for violation of traffic rules

The majority of Russians consider the police the most corrupt institution. Although police have lifted the salary, and payment of fines occurs electronically, corruption is still pervasive.

8. Getting a place on a cemetery

Without a bribe no cost, even death. Relatives can bribe to get a better place in the cemetery or make use of a good funeral services.