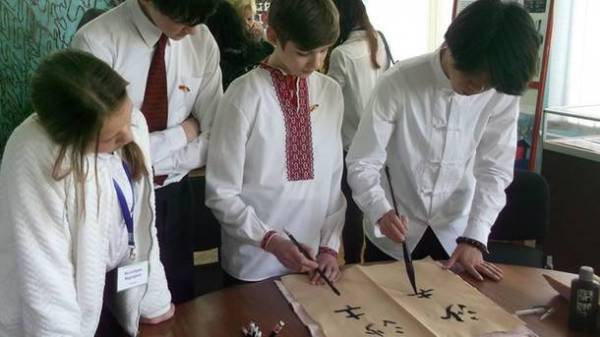 Today parents choosing a school for your child, strive to make the school revealed to a graduate of a special perspective. Not surprisingly, becoming more and more popular schools, gymnasiums and courses that focus on the study of the exotic for our latitudes languages — because English has long been no surprise. Among the many stand out school, where he studied Oriental languages. Those in Ukraine are few, and where the language studied and from the first graduating class is one — “Kiev gymnasium of Oriental languages №1”. Given the fact that the school of public and tuition free, to get to it is not so simple — you need to pass the competition. “Today” learned how to recruit and what I can achieve by the pupils.

INTERVIEW: WHETHER THE CHILD IS READY TO UNUSUAL LANGUAGE

Gymnasium of Oriental languages №1 is famous for its “highlight” — learning seven languages (Arabic, Chinese, Persian, Japanese, Korean, Turkish, Hindi) and English (second language) with 1st class. They say that coming to them children who are on the interview show a sufficient level of General training and possess phonemic abilities (ear for music).

“Last year the competition was 6 people per place (this is the reception just started), we can’t take all of the children to lead us, — explains the Deputy Director of school Natalia Jigoro. — Recruited for study, using the instructions on the admission in 1st class (order MES No. 389) at the end of the interview, we find out whether a child learning a completely unfamiliar language”.

NO STRESS. Parents are being warned to set up right: not to be shy and not to get upset in case of refusal. At the same time to examine the writing skills, reading, numeracy, or knowledge of a foreign teacher during the interview will not. They can only test speech and the child’s ability to make contact with the teacher.

“I wanted my child to learn Chinese. During the interview, saw to it that we do not ask illegal job — describes the situation from Kiev Olga Gritsenko (in the end her son to school not accepted). — Nikita talked on different topics, and the conversation was quite interesting. And then present the teacher spoke the words that the son had to repeat. This he could not do it. And I explained that to the study of Oriental language, he is not yet ready. I had no complaints about the school and we did the other — with advanced English.”

In the gymnasium itself say that in class up to 30 students, but allocate them into 3 groups. The programs are developed in the school, and it is calculated on a complete cycle, from 1st to 11th grade.

According to Natalia Digory, the most popular language who want to study in high school is Chinese. Almost at the same level in Japanese, Arabic, though, and the rest Turkish, Korean and Hindi is quite interesting coming (depends on kit). In the end, the school turns out multinational: learning the Ukrainians and those from the East, both parents or one of them.

“It is important for children understanding why they are learning a language, and the right motivation — says the head teacher. — Without this, the success of the study and future prospects can be called into question”.

At the same time, motivated students can achieve great things. For example, in high school to take one more Eastern language electives, to participate in various competitions, which allow to obtain a range of careers, no problem to communicate with foreigners. Even the students of the 9th grade without difficulty cope with the international exam, and graduates can enroll directly in universities in the Eastern countries.

“A great help is the fact that some discipline is taught by native speakers, and the Internet-conference with countries teach us to another country,” says student Olga.

CONTESTS. In addition to the internal competitions, often are selected for international competitions. “Every year we organize all-Ukrainian selection tour on competition “Chinese bridge” — said in high school. — It is prestigious, as is estimated, and knowledge of the language, and art rooms. The winners offer attractive prospects to visit China and even to enter the University on scholarships from the Embassy of the country. For our graduates is the problem that Ukraine, in fact, no universities, focused on our graduates.” Embassies of the Eastern countries are actively cooperating with the school.

EXTRA-CURRICULAR ACTIVITY. Although the gymnasium is not considered to be a full day, in fact after school a home is not in a hurry. “I go to martial arts, and my sister — in vocals and choreography,” says the seminarian Andrew.

HE WHO SEEKS SHALL FIND

Besides secondary schools, there is still development centers, focused on Oriental studies. They offer to the study of Arabic, Chinese, Farsi, Hindi, Indonesian and Japanese. And those who focused more on culture, taught such arts as origami, ikebana, playing flute, shakuhachi and calligraphy. The cost of language training starts from 560 UAH per 4 sessions (120 min, 1 time per week) that will provide the necessary materials. Also there are courses of Oriental languages and higher education: for example, when a KPI for them. Sikorsky is a Center from the Embassy of Japan in Ukraine, where education costs 1400 UAH/semester (two-hour class 1 time a week). To touch the art. Possible courses of Oriental studies