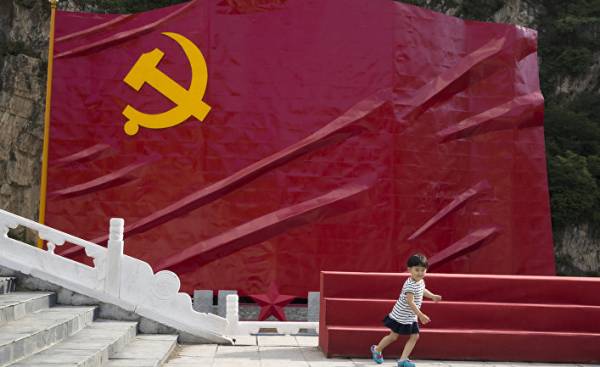 Perhaps, there is nothing that 36-year-old Lin Yu Li (Li Yu Ling) would not be ready for his six year old son.

Every Saturday she leads him in a special children’s group where the adults speak English to at an early age can learn your first foreign language. From there he went to drawing classes, and even Lin Yu is considering Whether to give him to learn to play the violin. In the fall the son will go to school, and she suggests that each day will help him with his homework.

Not to have a second child? Never in my life, she says firmly.

“I want to take care to give my son a good education, which means I have neither the time nor the energy to acquire another several children,” says Lin Yu Lee.

And this means that it confirms the trend that more and more spreading in China, according to Chinese authorities, which has become a considerable problem.

Last year, the authorities abandoned the policy pursued since the early 1980-ies and forbidding most couples to have more than one child. A similar measure was taken in order to prevent the population to grow too quickly. Sometimes, the government resorted to quite severe measures against those who dared to disobey — such as forced abortion.

But today the situation has changed radically. Now the population is growing slowly, and the authorities fear that China may have problems with the workforce and that the future operating in the country will not be enough to contain the whole army of elderly.

Therefore, the government would like to see in the Chinese families had more than one child.

There’s just one catch. Most mothers and fathers in China today think the same as Ling Yu Lee, and I want to have only one child. And they care little for the wishes of the authorities of the country or their concern.

“This is a completely private matter, how many people have children. This is not an area where government must intervene,” — said the 33-year-old Zhang tingting, a son who is nine months.

“And me and my husband every day at work, for us to have another child is just unbearable,” she says.

In the children’s Paradise no place several children

This Saturday morning, she went with her sister in a big shopping centre with cafes, restaurants and shops in the capital of China Beijing. Families with children love to spend the weekend here because there are — among other things — is much of what you can do with children, ranging from play rooms to huge skating rink closed.

But even in this bustling children’s Paradise, something not seen even a single pair of parents who would like to have more children.

“I really want my son to grow and develop as best as possible, and this means that I spend a lot of time with him. We are thinking about multiple children, it’s not about the money, but I just don’t know if I can find time to pay as much attention to another child,” says 35-year-old Xue Feng, the son which is four years.

The poll, conducted by the Commission on health and family planning of China in 2015, showed, according to the Chinese newspaper China Daily that 60% of the households surveyed without enthusiasm the thought of having not one, but multiple children.

And now it is forcing the Chinese authorities to think about how not to introduce any tax cuts and not to increase a vacation to families with several children.

This was the first increase in the birth rate in almost two decades, but the figure came in below the 20 million expected by the Chinese government.

In January, the government presented an action plan in the field of family policy. According to the newspaper South China Morning Post, the plan implies that China’s population will rise sharply by 2030 and will be about 1.45 billion people. And if today is older than 60 years is less than one-sixth of the Chinese, then it will be over the age of 60 every fourth inhabitant of the country.

Civil disobedience in the marital bedroom

However, the Chinese authorities are forced to admit that even for such a authoritarian regime like China, there is a limit to what they can force people. And in this matter the government faced a large-scale civil disobedience.

“I never liked that the government is trying to interfere in how many children I have. I believe that the policy of “one child” was a violation of human rights”, — says a young mother who agrees to name only the name — Vive.

Her daughter of four months.

“My husband and I earn not so much, but we are very selective in what you give to our daughter. She must be the best baby food and the best quality clothes. It is proper, so we simply cannot afford another child regardless of what he thinks about the government,” she said.