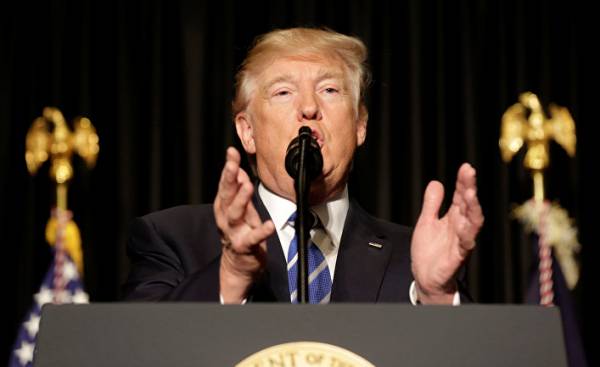 In Moscow and Kiev, looking forward what the US President Donald trump will determine its policy in relation to the conflict in the Southeast of Ukraine, Crimea and, accordingly, will know, is going or not to remove the economic sanctions against Russia.

Throughout his election campaign, trump hinted that he may recognize the Russian Crimea, and to weaken or even completely remove the West introduced economic sanctions against Russia.

However, only the press Secretary of the White house Sean Spicer has denied rumors that the new President intends to do it. So will there be a thaw in us-Russian relations?

As it became known, during a telephone conversation between the presidents of Ukraine and the USA Petro Poroshenko and Donald trump, which took place in the night of 4 to 5 February, spoke of the need to achieve peace in the Donbass. But at least trump not a word was said about “Russian aggression” and the need to tighten economic sanctions against Moscow, as Kiev seeks. But before, during the Obama presidency, the U.S.-Ukrainian dialogue did not do without it.

It is impossible not to draw attention to the fact that at the time of this telephone conversation the situation in Donbass, especially around the town of Avdeevka, where in late January-early February has been an escalation of the conflict has calmed down considerably.

Then, two weeks ago, the world talked about greater risk of unfreezing the conflict, the resumption of full-scale fighting between Ukrainian armed forces and militias of the unrecognized republics DNR and LNR and the actual demise of the Minsk agreements. Petro Poroshenko was forced to cancel his visit to Germany.

Putin gave a detailed answer, why did this escalation around the Town. “The first reason is that the Ukrainian authorities today need the money — he said after talks in Budapest with Prime Minister of Hungary Viktor Orban. — And the money is better just to knock and from the European Union and individual European countries, from the United States and from international financial institutions, exposing themselves as the victim of aggression.” The second reason, according to the Russian President, is that by diverting attention to the Donbas, the Ukrainian authorities are trying to deal with the opposition. And finally, the third reason — Ukraine was supported in the US have now retired for “candidate” and now, by lending to businesses trying to establish an uneasy relationship with the new administration of U.S. President Donald trump.

All hopes Poroshenko now connects with the forthcoming visit to Washington (presumably it will be held this spring). Many experts therefore believe that the escalation of the conflict in line with the DPR and LPR, Kiev has once again tarnished its image in the eyes of the new American administration, which was not thrilled with the Ukrainian side.

What steps can be expected in the near future on the Ukrainian direction from team trump? This question I asked a well-known U.S. political scientist, Director of the Russian direction of the prestigious American Enterprise Institute Leon Aron.

“Trump only begins the game in politics, he says. — The new President has not yet spoken exhaustively on the topic of the Minsk agreements, which are a prerequisite for the lifting of sanctions. Now, however, he had a fairly strong team in the field of national security. And ahead he will not go. He will not say: “Let the Crimea is Russian” or “I care about the fate of Donbass”. Let’s not forget about the serious resistance in Congress, which will not be overcome even such a strong-willed President like trump. In its favor decisive action after the inauguration of the construction of the wall on the border with Mexico, the introduction of the promised restrictions on the entry of immigrants and improving the climate in relations with Russia. It was all supported by America. The Russian direction of his policies — something else. And I think trump will not openly fight with Congress because of Putin. Rather, it will be a kind of covert struggle, the search for some compromise.”

About undercover maneuvering, in particular, by the messages in the American media about the meeting and several phone conversations of assistant to the President for national security Michael Flynn and the Russian Ambassador to the U.S. Sergei Kislyak held before the inauguration of the trump. Some American politicians have suggested that Flynn and Kislyak could discuss the ill-fated sanctions. Us intelligence have investigated the contacts between the national security adviser of the President and the representatives of Russia, the newspaper The Wall Street Journal.

Suspicions that trump is prepared to reconsider the position of the White house against Russian aggression against Ukraine expressed by The New York Times. The President of the United States Donald trump doubts that Moscow really supports the Pro-Russian militants in the East of Ukraine. This writes the newspaper, quoting trump that supposedly “no one can tell exactly who is fighting the Ukrainian army.” According to the paper, thereby trump actually getting in the direction of the President of Russia Vladimir Putin.

And they think in Moscow about possible Ukrainian strategy trump? “Hardly Ukraine will become one of the main foreign policy priorities of the administration of Donald trump – the Director of the Russian Council on international Affairs Andrey Kortunov. — First, trump has other more important priorities — protecting American business from foreign competition, confrontation with China, the fight against international terrorism, and so on. Second, trump considers the situation around Ukraine as a largely European problem, which needs to focus on the European leaders. Thirdly, during the election campaign, the Ukrainian political establishment almost unanimously supported Hillary Clinton and the new American President is not one of those who easily forgets the past”.

This, in the opinion of most Russian experts, implies the following. The white house will not significantly increase economic assistance to Kiev. Team trump will not be widely announced Poroshenko the desire of Ukrainians to join NATO. It is unlikely that Washington will supply Kiev lethal weapons, which could be a strong catalyst for escalation of the conflict.

So, the format of Putin — trump

In Moscow understand that in respect trump in all cases a significant proportion of pragmatic interests and political expediency. The agenda of the negotiations, the U.S. and Russia are not identified. What can trump negotiate with Putin? The Kremlin is unlikely to support America’s efforts to limit the expansionism of China. It is also doubtful that Putin will dramatically change its strategy in Syria. The white house is confused: a clear strategy towards Russia is not yet built.

Possible package agreement Putin and trump. According to the Russian leader, Washington, first, should not encourage “irresponsible Ukrainian politicians” or money (still a steal), no weapons; second, it would be nice if the United States recognized the conflict in the Donbas “domestic” (as is Putin), so America and Russia stayed away, as guarantor of achieving a peaceful agreement.

In Western Europe, Putin has much more leverage than Poroshenko. Many countries in varying degrees, expresses discontent with the continuing sanctions against Russia, which they suffer themselves. In Germany are gaining strength right-wing forces, opposing Angela Merkel, who is now one of the main opponents of the Russian President. In France, where as in Germany in this year’s elections, all the key presidential candidates — Emmanuel macron, françois Fillon and marine Le Pen in varying degrees, calling for renewed sanctions against Moscow.

In short, time is working for Putin. In contrast to Poroshenko, he does not need to overcome the resistance of hostile groups within the political elite. In communication with the leader of a superpower he has more space to maneuver. One gets the impression that the risk of an open confrontation with America in case something goes not as planned in the format of tramp — Putin in the near future are minimized.