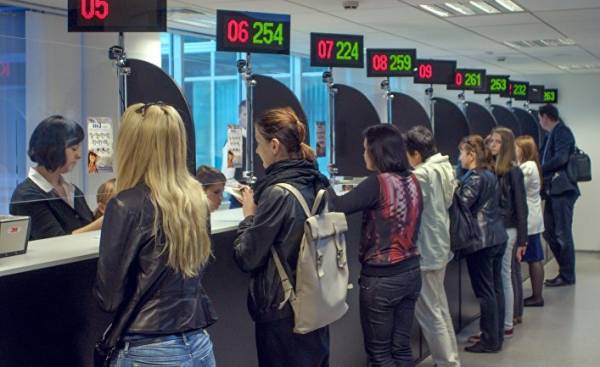 Tourists who ask for asylum, will be a big challenge when wider Europe will open its Eastern border.

About visa center of the Italian Embassy in Moscow is all Russian.

“Visa to Europe for 34 euros” — promise to Italians. A more favourable exchange rate of the ruble leads to the fact that the Russians hope to realize my dream about a vacation.

But some in this line has other ideas.

From January to March from Moscow to Oslo came 17 Russian Italian and Spanish visas to seek asylum.

The fingerprints showed that they arrived in a Schengen country with a visa to spend a holiday, to visit friends or to make transactions. But instead they sought asylum in Norway.

They use a new method to obtain asylum, which appeared after the introduction of stricter border controls in Europe.

A recent report from the police Departments to work with foreigners shows that the share of asylum seekers coming to Europe as tourists, is growing:

• Fingerprints and other biometric indicators all new asylum seekers arrived in Norway in the first quarter of 2017, show that every fourth was a Schengen visa.

• Police detected in January, February and March that have recently arrived 145 already had a Schengen visa.

• From January 2016 in the fingerprint database appeared 505 applicants with visa.

• Most of them were Turks, Russians, Eritreans and Iranians.

“Increased proportion of asylum seekers who arrived legally to Norway in search of political asylum,” writes the police Department for working with foreigners.

Schengen open borders in the East

11 June, the EU and Norway open the border for the 42 million Ukrainians, who will now be able to go to Europe without a visa.

This spring was cancelled visas to five million Georgians.

At the same time, the EU is considering the abolition of visas for Kosovo and Turkey.

In a letter to the Ministry of justice, the Office for foreigners concludes that the abolition of visas for Georgia, Ukraine and Kosovo can lead to the fact that many “will seek asylum for economic reasons”.

What are the consequences of the abolition of visas?

“After the abolition of visas, apparently, from these three countries will bring more people, — says the Office for foreigners.- Therefore, there is reason to believe that many will be in the country illegally or to commit certain crimes.”

638 Georgians, Ukrainians and the Kosovo Albanians were expelled from Norway in 2013 and may 2016, mainly because of the unreasonable seeking asylum and illegal stay in the country. If now will increase the number of asylum seekers, it will be necessary to resolve this issue quickly by entering a quick review of cases, says the Office for foreigners.

This means that the Affairs of citizens of these countries will be dealt with swiftly by the “48 hours procedure” these citizens will be sent, and the entry into the EU they will not be allowed in subsequent years.

“It obviously aims at a preventive effect,” writes the Office for foreigners.

From Moscow, Istanbul, Ulan Bator and Almaty to Oslo

17 of the 22 Russians who asked in the first quarter of this year asylum in Norway, obtained a visa at the Italian and Spanish embassies in Moscow.

In addition, came a large number of “defectors asylum”, so the police called this group of visas issued in the Saudi capital Riyadh and the Turkish Istanbul.

Check the fingerprint also showed that a large number of asylum seekers from Turkey got his visa at Abuja in Nigeria, Ulaanbaatar in Mongolia and Almaty in Kazakhstan.

58% of “defectors asylum” had a tourist visa. The rest received a visa to visit family, business trips and medical care.

The strengthening of border control in Europe

Police unit for work with aliens explains the situation to the fact that a large number of check points at the border and checking passports has led to the fact that it is much harder to move around in the Schengen countries.

“Some job seekers arrive by plane to Denmark and Sweden and then to Norway,” writes the chief of analysis and methods of police work with foreigners GRU Anna Perham (Gro Anna Persheim) in an email to newspaper Aftenposten.

“Some candidates were able to fly to Schengen area with valid Schengen visas, while others, presumably, could arrive at a false or forged documents authorizing stay in Europe.”

The Dublin agreement States that a petition of asylum seekers should be treated in the country which issued them the visa. But if they presented fake documents or does not have all the necessary documents, which do not allow to establish the identity of, their petition being considered in Norway.