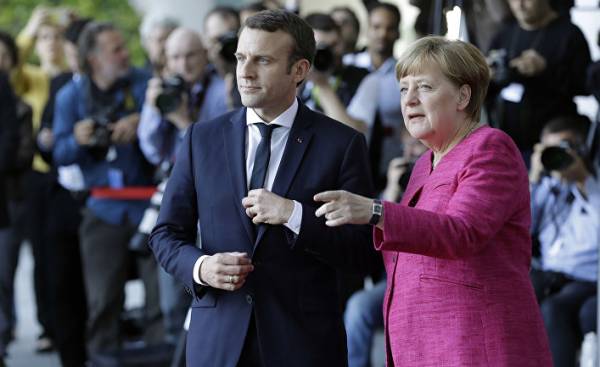 A few hours later after returning from the G7 summit in Sicily Angela Merkel came to the race. On the eve of the Federal election in September the German leader went on the offensive. Public opinion polls showed that the Christian Democrats 10% ahead of the social Democrats — her partners in the coalition.

But this is only the beginning. Merkel, going for a fourth term, does not want to risk it. During the meeting in Bavaria, and then during a speech in Berlin, instead of to praise Germany’s powerful economy and low unemployment, she lashed out at the administration trump.

“The last days showed me that the times when we could completely rely on others to some extent over — said Merkel. — We are also clear that Europeans must take their destiny in their own hands. G7 fails to reach agreement with the United States, it became clear how long and difficult will be this way. I think it is not necessary to comment on the differences”.

Simple statement Merkel is not only reflected her frustration with the refusal of the American President Donald trump to address issues of climate change, his criticism of the trade surplus of Germany and a penchant for protectionism.

Chancellor comments were not directed to Washington. They were aimed at the Germans. She did not want to give the social Democrats. And Sigmar Gabriel, the Minister of foreign Affairs of the Social democratic party, and Martin Schulz, the rival Merkel on the way to the post of Chancellor, playing the anti-American card. In addition, they do not agree to spend 2% GDP on defence which is an obligation of Germany. Both issues created a resonance among German voters.

Merkel can win votes by bashing the United States. But in fact, she and the Minister of internal Affairs of Germany Thomas de maizière has no illusions about the role of Washington in the security of Germany. Relationships between intelligence and security services of the two countries as “excellent”, as stated by de Maiziere during a speech on may 29.

In other words, to criticize the United States is good, but a future in which Europe can cope with the issues of defense and security, to put it mildly, elusive.

While Merkel focused on his re-election, the new President of France Emmanuel macron celebrated his leadership. We are talking about the visit of Russian President Vladimir Putin in Versailles, dedicated to the tercentenary of the visit of the Russian Tsar Peter I in France.

The meeting became more and more uncommon as soon as Makron was struck. He criticized Russia’s intervention in the French elections in 2017, and Russian TV channels, RT and Sputnik. “They acted as the organs of influence, propaganda, false propaganda,” macron said during a press conference with Putin.

The French leader also criticized the Kremlin for supporting marine Le Pen of the populist and anti-European leader of the National Front, and denounced Putin for supporting Syrian President Bashar al-Assad. He missed and the protection of human rights in Russia.

Still against the internal and external policy of Putin, openly spoke only Merkel. With the exception of the President of the European Council Donald Tusk, and other European leaders, in particular, Federica Mogherini, EU high representative for foreign Affairs, rarely challenged Putin. Now, when macron was held at the Elysee Palace, Merkel has acquired a valuable ally.

She will need the support of Paris more than ever. After the meeting with Putin, macron said it was time for a new round of peace talks on Ukraine. The so-called Normandy format, including France, Germany, Russia and Ukraine, created for the ceasefire in the East of Ukraine, died. Part of the country are still occupied by Pro-Russian forces.

It is difficult to see how Merkel is trying to break the deadlock in the implementation of the Minsk agreements adopted by Channel four to stop the war in Ukraine. Perhaps the team of Macron on foreign Affairs has fresh ideas that will help to end the conflict.

In any case, if the party Rules and those who supported the new President, will participate successfully in elections to the National Assembly on 11 and 18 June, it will strengthen its position in a time when Merkel needs a strong ally in Paris. In connection with the forthcoming negotiations on the British exit from the EU, unpredictable U.S. administration, and the impossibility in the foreseeable future to end the war in Syria, the French and German leaders will need a little more rhetoric to establish a new European course.