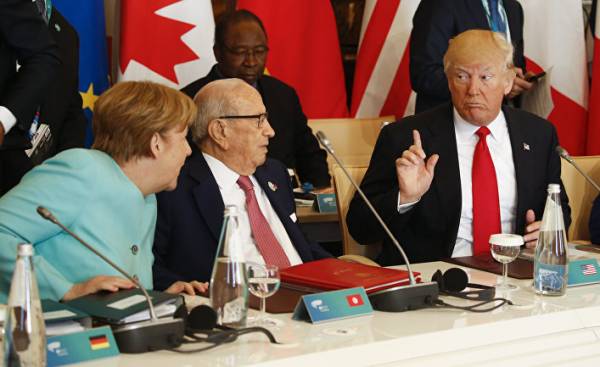 Berlin — foreign Minister, Sigmar Gabriel, was skeptical about the American-European relations. Nevertheless, the Federal government on Monday stressed the importance of the transatlantic relationship. Despite this, the EU will restart with obtaining greater independence.

Merkel, for which in his youth spent in the GDR, America was a bright ideal, declared the end of reliable relations between the United States and Europe. The words spoken at the weekend, is notable for Merkel, who does not lose control over the words even in the “beer tent”, while those at the beginning of her tenure as considered it “a transatlantic romantic”.

“We, the Europeans, really should take their destiny in their own hands,” said Merkel during a joint with the head of the Christian social Union (CSU) Horst Seehofer (Horst Seehofer) visit the “beer tent.” In the same direction Merkel has repeatedly spoken out in past months in the light of Breccia and elections Donald trump President of the United States. Unexpected was her addition: “Gone are the days in which we could completely rely on others, I realised that in the last days.”

These words were minted at the failed summit of the G7. The “big seven” — the group of States with developed industry, which Merkel has always said that in the first place they have common values. For the first time in the circle of these friendly States will be a document which must be publicly named divisions. Trump, who questioned the climate change, did not want to comment on the Paris agreement. In addition, this week he’s going to tell the world coming out of a global agreement on a joint climate protection.

The fact that the German Chancellor is not enough more patience for trump, it was with great attention perceived by the world. Many European commentators believe that the end of the Transatlantic Alliance. Opponents of the trump in the US said that in this he is guilty, while his supporters blamed “stupidity” Merkel. The French newspaper Le Monde said that Germany is indeed “deeply shocked”, because he always made a bet on the Americans and the British.

The Federal government has tried to neutralize the impression that Merkel turned her back on the transatlantic relationship. Precisely because they are so important, right, fair to name differences, said government spokesman Steffen Seibert (Steffen Seibert). He called Merkel “a deeply convinced supporter of the Transatlantic Alliance”.

Expert of the Christian democratic Union (CDU) Norbert röttgen (Norbert Röttgen) stressed the need for transatlantic relations in the age of trump. There is a deep convergence of values and interests between the United States and Europe, said Röttgen. “Trump is not the United States, he is only acting President at the present time”. Like Merkel, Röttgen relies on greater independence of the Europeans: “We need to bring into the Alliance more European unity, more will and ability to act — and above all, it must be done in Germany because we occupy a special place in Europe, which implies a special responsibility.” As a possible joint transatlantic project he called the efforts to maintain peace in the middle East. “Then Europeans must prepare a proposal”.

The Minister of foreign Affairs Sigmar Gabriel (SPD) (SPD) looks at European-American relations been more skeptical. “Whoever accelerates climate change, not paying sufficient attention to the protection of the environment, who sells more weapons to areas of military conflicts and does not want politically to resolve the religious conflict that endangers peace in Europe,” said Gabriel in our office. Short-sighted policy of the American government against the interests of the European Union. “The trump wants to cancel the agreement on climate protection, to supply weapons to crisis regions and to deny entry to people who hold certain religious beliefs, further stressed Gabriel. — If we Europeans today strongly oppose this, the flow of migrants to Europe will continue to increase. He who will not oppose policies of the United States, will become a partner”, — he explained.

This is not the first step to independence, which Germany has taken against its so-called when-that “big brother” USA. In 2002, during the election campaign the then Federal Chancellor Gerhard schröder said “No” to the war in Iraq.

In the European Union, there are also signs pointing to the growth of self-reliance. The representatives of Germany in the European Parliament especially insist on raising the level of collective security within the EU. “For decades, the U.S. has subsidized our stability, we are accustomed to rely on in a serious case they’ll get for us a potato from the fire,” — said Vice-President of the Parliament Alexander Graf Lambsdorff (Alexander Graf Lambsdorff (FDP — FDP)).

Those days are gone. Now Europe needs to turn from consumer products stability. Similarly, the words of the head of the European people’s party in Parliament, Manfred Weber (Manfred Weber) (CSU — CSU), who sees in the common foreign and security policy of the “great consensus”. “Europe must in the future be able to protect herself, — said Weber. — We Europeans have too long rested on the chest of Americans. We must become so strong in the military sphere, so that no one could be a challenge for us”. The time when Europe could rely on the protection of the United States, were, he said.