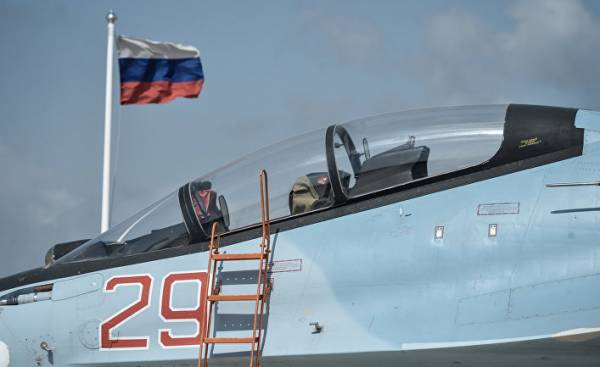 At any given day it can be hard to separate the important from the unimportant. Anyway, thoughts suggesting exactly that — reflecting on what happened today, we can assume what might happen tomorrow.

Located on the shores of the Black sea resort city of Sochi, Russian President Vladimir Putin discussed with President of Turkey Recep Tayyip Erdogan (Recep Tayyip Erdogan) a possible exit strategy from Syria. Today’s meeting underlines the urgency with which Russia is trying to extricate himself from a situation in which stuck as in a quagmire. One of the topics during the discussion was the creation in Syria of the zones of de-escalation or the so-called safe zones within the initiative promotion of political negotiations to end the ongoing conflict. However, on the question of other territories in the region, the Syrian rebels have refused to participate in peace talks in Astana on may the third, and defeated attempts to force the Syrian warring parties to discuss possible settlement of the conflict. This move demonstrates the difficulties it has faced — and how unlikely the successful implementation of the Kremlin’s plan for gradual withdrawal from the Syrian conflict.

Russia’s intervention in Syria, its actions (along with Iran) with the aim of supporting Syrian loyalist forces in some respects has been successful. For example, Russia’s participation in the conflict helped to stabilize the situation on the battlefields and recover the advantage of the Syrian troops. In addition, Russia’s entry into the conflict not only contributed to the deployment of troops and deployment bases in the country, but also gave the opportunity to create a polygon for training of personnel and demonstration of Russian military equipment. Finally, the intervention helped to increase the geopolitical weight of Moscow so that the Kremlin was identified as a key player in the region.

However, having played a Central role in the conflict, Russia is now seeking to promptly get out of it and stop participating in hostilities. Despite all the benefits obtained as a result of its participation in the Syrian crisis, Moscow is aware of the fact that suffered significant losses. And, more importantly, understands that the benefits which it has achieved to date, can over time easily fade — especially if the war drags on to such an extent that it will not be seen through.

Moscow’s relations with important allies and backers of the rebel forces, as Turkey and the cooperation Council of the Gulf countries, also deteriorated, especially when Russia has stepped up its support for Damascus. In addition, this support costs Moscow is very expensive — the cost of human lives and material costs. Losses among the Russian servicemen in the last few months have increased, mainly owing to an increased intervention of the Russian troops in the Syrian conflict.

Although, perhaps more importantly, Moscow understands that the longer she will remain in Syria, the less it will be possible to achieve a favorable and beneficial agreement. Russia has long been trying to use their position in the conflict as a means of obtaining more concessions from the United States and Europe, forcing them to sit at the negotiating table. However, as shows perfect Syrian air force air strike on the town of Khan Sheyhun with the use of chemical weapons, the events can instantly demonstrate the limits of Russia’s influence in the country. Meanwhile, Russian troops continue to find themselves face to face with a determined opposition, and Moscow is already experiencing the same problems with which the United States has faced in the last decade in Iraq and Afghanistan.

Russia in an attempt to avoid the scenario whereby she was “bogged down in the quagmire”, changed its position at the end of last year. Evidence of this first became noticeable during the negotiations with the United States and then again when Moscow tried to use the normalization of relations with Turkey, moving towards a political solution through negotiations, backed by the initiatives of the ceasefire. But Turkey did not want and could not convince it is becoming more radical rebel forces to make concessions sought by Russia. And all this time, increased Russian participation in the conflict has undermined Ankara’s attempts to act as mediator. In addition, the Syrian government, as Iran remains skeptical about the initiatives and motives of Russia, demonstrating a greater willingness to pursue a military solution to the conflict that much more important for the implementation of the basic interests of Damascus and Tehran.

The reality is that the political settlement of the Syrian conflict through negotiations now even less likely than at the time when Russia first started making tentative steps in the direction of exit from conflict. The ongoing violence weakens the remaining belief in the efficacy of the cease-fire that was declared more than once in a truce, which would be an important basis for further negotiations. While the rebel groups eventually began to take a more hard line, demonstrating remarkable resilience amid the overwhelming firepower of the loyalists and their allies. It becomes increasingly clear that even though militarily the rebels driven from their positions and forced to retreat, they are likely in large numbers to resort to insurgency and guerrilla tactics than lay down their arms. At the same time, Russia’s ability to play the role of a broker has been thoroughly weakened because of heavy air campaigns, held it against the rebellious cities and villages — that was emphasized by the rebels, leaving today’s talks in Astana.

Russia — the same as Iran — is bogged down in a protracted conflict, out of which very difficult. Even though Moscow continues to reflect on its output, any peace settlement must, ultimately, serve the interests of the Kremlin, and, it turns out that to achieve this goal is becoming increasingly difficult. Given that Moscow can’t really get away from Damascus, and equally unwilling to abandon its interests in Syria, its involvement in the conflict may not be so many to help in its efforts to improve critical relationships with countries such as USA, Germany and Turkey much harm. Just as the changing military situation can radically change the outcome of the battle, the chances of Russia in Syria has changed — and not for the better. And since the meeting of the presidents of Russia and Turkey in Sochi today, the Kremlin remains one question: what is the final stage of the game can be considered acceptable?