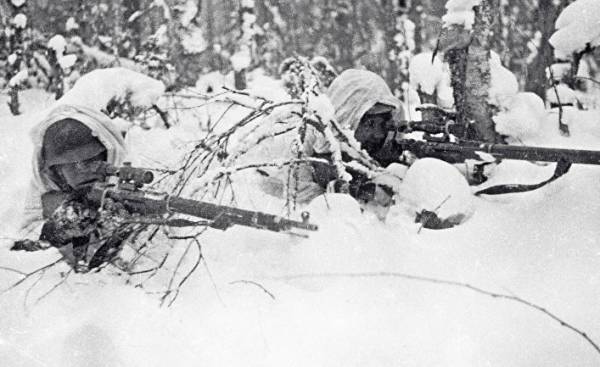 The Soviet government has often exaggerated the stories about his front-line snipers, and it was done for propaganda purposes. The sniper duel between Soviet sniper Vasily Zaitsev and “major Koenig” is probably a myth, although birds were undoubtedly good soldier.

Such myths is a weapon in the struggle for national survival, but also an instrument to enhance morale. But, from the point of view of history, similar myths complicate the picture.

The Soviet Union, of course, used snipers, and maybe did it on a large scale than any other country involved in world war II. Moscow sent to the front of a much larger number of snipers at the very beginning of the armed conflict with Nazi Germany. The Mosin-Nagant rifle, modified to engage targets at great distance, was the main sniper weapon of the red Army. Soviet soldiers during the Second world war were armed with Mosin-Nagant rifle М91/30 without optical sight — it was a tough, extremely durable military weapons with longitudinally sliding shutter and shop at five of the 7.62×54R — this cartridge is used today for firing a Dragunov sniper rifle and PKM machine gun.

The powerful cartridge and simple design mean that the Mosin-Nagant has a very strong impact, but it provides accurate and reliable shooting. In addition, this rifle is simple to maintain and it is difficult… too much damage. But the most important thing is that it is easy to produce in large quantities. Mosinskoy rifle without optical sight is to rely in this case we have only a mechanical sight has the effective range of fire of about 500 meters, and higher or lower will depend on your specific rifle and skill of the shooter. Well prepared and has a sharp vision of the shooter is able to hit the target in human growth, even with greater distances, however, this is not so simple.

After taken in the 1920-ies attempts to create new prototypes Soviet military in 1932 were installed on the Mosin-Nagant rifle different scopes, and eventually in 1942, their choice fell on a sniper scope with 3.5 x magnification (PU). A different version of this rifle mounted optical sight with 4x magnification (PEM), however, it was not particularly widespread.

In 1942, when the German army resumed the offensive on the Central part of the USSR, the country produces annually 53 thousand sniper rifles with PU scope. These data lead Martin Regler (Martin Pegler) and Bujeiro Ramiro (Ramiro Bujeiro) in his picture book “Military snipers since 1914” (The Military Sniper Since 1914). That’s an astounding number.

Top Soviet military leadership had also issued millions of icons “Sniper”, and, apparently, this was based on less strict rules than in comparable armies of the time. Nevertheless, this approach showed an appreciation of sniper skill, which is a concern for the German military. According to Reglera and Bukhara, in a single ambush in September 1941, Soviet snipers killed at least 75 German soldiers 465 th infantry regiment, then disappeared into the woods.

Soviet snipers just have more and they have in the first stage of the war there were more rifles with an optical sight than the Germans. “Initially, the Germans faced little resistance from the poorly equipped French and Polish snipers, who acted bravely, but there were very few, and they were not able to contain the powerful flow of the advancing German troops, noted, Regular and Bukhara. The first real evidence of the effectiveness of snipers came during the German invasion of Russia in 1941”.

Like the standard Mosin-Nagant rifle, which was issued a record number of sniper version with telescopic sight PU have also spread worldwide after the Second world war. However, in the USSR, they were released much less than ordinary rifles Mosin, so a sniper rifle with a PU scope today would cost in the civilian markets a thousand dollars or even more.

Whereas regular Mosin rifle today is worth much less.

However, the high price is mainly the problem of the collectors. Modern snipers armed with Mosin-Nagant rifle, whether in Ukraine or in Syria — I can find other ways to install an optical sight. In photographs from the war zone you can see some of the Mosin rifle in the configuration of “scout” with a large distance from the eye to the optical device installed in front of the shutter, since the standard “designata”, the bolt handle does not allow you to install a scope closer to the butt.

Sniper rifle with the PU scope has a curved bolt handle that allows you to shorten the distance from the eye to the installed optical sight, but the alteration of such a standard Mosin-Nagant rifles require some irreversible modifications, which — if they will do hired a weapons master can cost as much as the rifle itself. Collectors of historical weapons frowns on this kind of irreversible changes, as it requires drilling the receiver and removing the bolt handle.

However, for snipers involved in the very real wars of the 21st century, with the rifles of the early 20th century, preserving the historical authenticity of the weapons is at the very bottom of the priorities compared to the efficiency of its use on the battlefield.