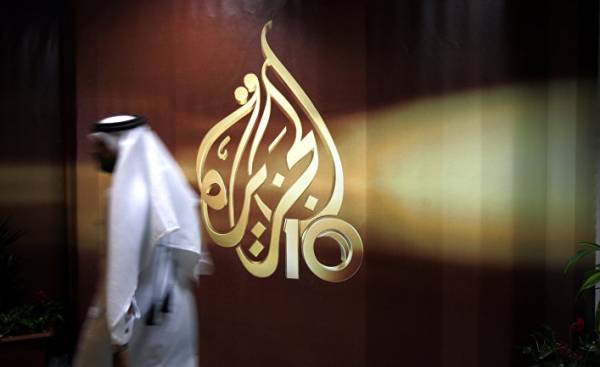 The editorial policy of the Qatari channel Al Jazeera and its coverage of controversial events in the region and the world have shaped a unique model of using the media to justify terrorist acts and those behind them, which is a gross violation of the basic standards of objectivity and journalistic ethics and media work.

Despite the geographical distance, the apparent lack of common ground and the objective divergence of interests between the two countries, Russia was one of the States that became the goal for the distorted campaigns on the screens of the channel.

In this regard, Ibrahim Ibrahimov, a Professor at the Russian Islamic University, believes that the state of Qatar uses Al Jazeera to increase their influence in the region. Through this media tool Qatar extracts private benefits from the extremist movements that strengthen its presence in some Arab countries.

According to him, when the “Muslim brotherhood” came to power in Egypt, Doha quickly began to support and Fund. In the media, secretly and publicly, supported the movement, known for its terrorist activities in most countries of the Middle East. Al Jazeera was at the head of this course.

Ibragimov pointed out that Al Jazeera was to use Sheikh Yousef al-Qaradawi as one of the tools in the information and psychological war. During his work on the channel, the screens out conflicting and false stories to justify and explicitly protecting terrorist organizations headed by ISIS and jabhat an-Nusra (banned in Russia — approx. ed.), despite the hundreds of brutal operations carried out by them in the world.

Specialist in terrorist movements, Viktor Ivanov said that the Qatari channel had deliberately turned into a platform for leaders of terrorist groups and all those who incite violence and justify bloody acts of these groups, as well as the exclusive right of the channel to the disclosure statements of the groups and information about their military operations.

He noted that Al Jazeera was the only media in the world, which had a unique right to the publication of speeches and statements of the leader of al-Qaeda, which at the time was Osama bin Laden, and later the next head of the organization — Ayman al-Zawahiri. Correspondents of the channel was the only one admitted to such meetings, despite the fact that the leaders were hiding in secret places and dozens of States hunted for their crimes.

Ivanov said that the conscience of those who set the policy of the channel and welcomes its unprofessional practice are responsible for the blood shed and lives interrupted because of the lies and misrepresentation by concealing the truth about the riots and civil wars in many places in the world that is still going on.

Professor Ibrahim Ibragimov of the Russian Islamic University, asks a question about the interest of Al Jazeera to the Crimean issue from the standpoint of returning the Peninsula to Ukraine, although there is no exclusive and privileged relations between Kiev and the state in which the working channel does not exist. Interesting reports, falsify the facts about the Crimean referendum and annexation to Russia, and promotion of terrorist operations that occurred in several regions of Russia, including Moscow and St. Petersburg, as well as slander, that it is a response to Russia’s policy in the middle East. 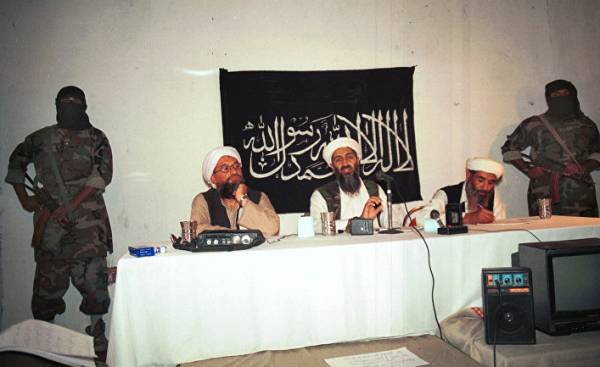 © AP Photo, the Leader of al-Qaeda Osama bin Laden, surrounded by his aides and armed bodyguards in a meeting in Afghanistan

Al Jazeera came out in the broad world broadcasting in 1996 and quickly became a stand out in the mass media. It was widely believed that its slogans actually embody the real opinion of the Arabic channel headquartered in Doha, capital of Qatar.

A hallmark of the work of Al Jazeera in covering the events of 11 September 2001 and the war in Afghanistan from its offices in Kabul, was the fact that Al Jazeera broadcast the speeches of the leaders of “al-Qaeda” (primarily Osama bin Laden and Ayman Al-Zawahiri). Thus, the channel has demonstrated its close connections with “al-Qaeda”, causing a suspicious attitude among many viewers and even entire countries.

Saudi writer Turki Al-Turki believes that Al Jazeera is able to communicate with any extremist around the world, because inside the canal there are people who trust the leaders of fundamentalist groups. In the end, the network is doubtful and artful ties continues to trail from Turkey to the United States and Canada, passing through the centre of London.