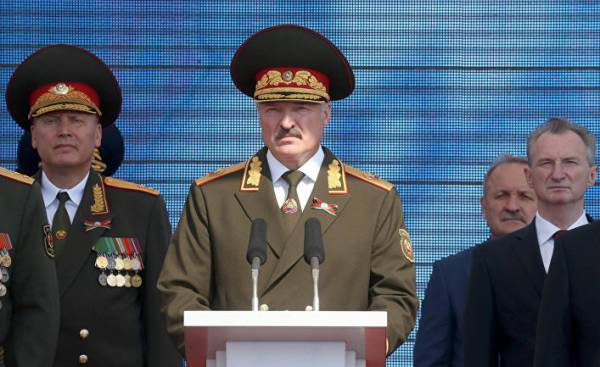 “But if there are some pundits who believe that the Belarusian land, as they say, is part of the Russian world, or even Russia, forget it! We have always been welcoming to every person, but also will force everyone to respect our sovereignty and independence.” (The President of Belarus Alexander Lukashenko at a press conference 29 Jan 2015).

“And all Westerners, frankly, and the European Union and the United States understand me when I say: guys, you should know, and we can honestly say, God forbid, something happens — we will stand shoulder to shoulder with Russia. She’s our ally!”. (Alexander Lukashenko, in a speech to the National Assembly on 29 April 2015).

These two quotes Alexander Lukashenko starts published by the Center for the study of politics of Eastern Europe the collection “Foreign policy of Belarus: 360°”, in which experts from Belarus, Latvia, Lithuania, Ukraine and Russia share their insights about the dynamics of the Belarusian foreign policy after the Ukrainian events the spring of 2014.

Theoretically, Belarus and Russia have United in a Federal state, but the real integration is stalling because Moscow and Minsk look at its objectives in different ways.

Both of these quotes are well characterized boundaries maneuvers of Minsk, namely: the Union with Russia is impossible because of the position of Belarus, as well as the impossible neutrality of Belarus in case of military conflict between the West and Russia due to Russia’s position.

Integrate neighbors or the press?

Other implemented in the CIS integration projects involving Belarus can not boast of great achievements. The total volume of mutual trade of member countries of the Eurasian economic Union (EEU) could be more if the participants of this Union is so actively sought economic ties with the EU and China.

Even the sacred cow of the Belarusian-Russian relations — cooperation in the military sphere — is not as sacred as it may seem from the outside.

Even the origins of cooperation in the defense sector in the early 90-ies marked a specific understanding of Moscow regarding the future course of integration in the CIS. Belarus in 1992 did not agree to sign the Treaty on collective security on the basis of which in 2002 was created the Organization of collective security Treaty (CSTO). Have similar to NATO, but rather in the formal sense — the CSTO has an article: “In the case of an act of aggression directed against any States parties that other States parties will render necessary assistance, including military assistance, and also assist those that are available to them”.

Belarus in 1993, are unable to pay for Russian natural gas and Moscow has received an argument that was so convincing that Minsk signed an agreement providing for close cooperation in the military sphere.

Not only important structural achievements, and character integration. Belarus, as a CSTO member did not show much enthusiasm. At the beginning of another dispute with Moscow economic nature Lukashenko reminded that the participation of Belarus in the Russian defense projects is not free.

In 2009 the President of Belarus said: “the Economy is the basis of our common security. But if our closest ally in the CSTO is trying to destroy this base, and actually puts the Belarusians to their knees, then how can we talk about the consolidation of security in the CSTO space?”. For balance it is necessary to mention: as soon as is reached another agreement on energy prices or other economic issues, Lukashenko starts talking again about the intrinsic historical and cultural ties between the Belarusians and Russians…

It may seem that the differences between Minsk and Moscow 2016-2017 it’s just continuing the process of economic-political bargaining, which has been observed for many years. In 2017 the two sides exchanged special “courtesies”.

Belarus announced its decision to provide visa-free visits to citizens of 80 countries, in turn Russia responded by creating security zones on the border of the two countries. After the meeting of presidents of Belarus and Russia, which took place on 3 April in St. Petersburg, it was stated that all disputes resolved.

But something changed in the atmosphere of the region, the climate of relations changed after Putin’s speech 18 March 2014. Then the President of Russia annexation of Crimea called a step in the reunification of “Russian world”. About relations with Ukraine, Putin said: “…We are not only close neighbors, we actually, as I said many times, one people. Kiev — mother of Russian cities, Ancient Rus is our common source, we still could not do it without each other.”

That choice of words immediately after the withdrawal of the Crimea, points to the inconceivable cynicism, which can be compared with the situation when the rapist explains that took violent actions against the victim, because he is emotionally and culturally close to her… the Representatives of Russian regions, state Duma deputies, listening to the speech of the head of state, decorated the lapels of their suits ribbons, besides, larger than usual.

Since then we have not seen ribbons on the clothing of officers either Belarus or Kazakhstan.

The annexation of Crimea has forced Minsk to alarm and start the “soft Belarusization” to emphasize the difference of identity of Belarus from neighboring countries. To do this is not easy because a realized Lukashenko for many years, the policy led rather in the direction of Russification, and in 2017 in Belarus in Belarusian says much less inhabitants than in 1994.

Concerns with the exercise “Zapad-2017”

There’s no indication that the Kremlin is planning to change the opinion about Belarus as about the subordinate Moscow buffer zone, which separates from the NATO of the Russian capital. But whether Lukashenko is indispensable in the eyes of the inhabitants of the Kremlin?

In the military strategy of Russia Belarus is an important state, whose loyalty to Moscow was a prerequisite for support of the Belarusian elite, headed by Lukashenko. The current relative stability in the relationship may change if the Kremlin will come to the conclusion that Belarus starts to deviate from a certain orbit of Moscow.

Moscow with the help of supply Belarus with cheap energy resources can partially ensure the tidiness of streets, the construction of new stadiums and the lighting of facades of Minsk. In return, the Russians get to spend together with Belarusians regular military exercises “Zapad”.

What happens if Russia is not enough economic opportunities to ensure the loyalty of Lukashenka? There are different predictions and possible future scenarios. Russian expert on military matters Alexander Goltz in the new book the Centre for policy studies in Eastern Europe, stresses: “Revanchism and expansionism of Moscow challenges the sovereignty of Belarus, as well as the right of Lukashenka to take on his state’s decision. You can prevent that in the future it will become increasingly difficult to secure the participation of Minsk in the activities of military cooperation in exchange for economic benefits. In turn, Belarus will seek ways how to evade these measures.”

Goltz writes that the deployment of allied forces in the Baltic States and Poland will increase pressure on Minsk from Moscow.

Russia could insist that its forces remained in Belarus constantly to strengthen the presence of the strategically important Suvalki corridor that connects the area between the Belarus and the Kaliningrad region.

Lukashenko will have to maneuver. On the one hand, the Belarusian President does not want to prevent the dislocation of a significant number of Russian troops, as this will reduce its ability to single-handedly govern. On the other hand, as noted by Goltz, rapprochement with the West will make Lukashenko to ease the pressure on domestic opposition, the same as in the first embodiment, will reduce its power within the country.

Despite the fact that after the recent protests against the “law on social parasites” in relations between Belarus and the EU there was a slight thaw, the West should not cherish great illusions about the real possibilities of the maneuvers of the foreign policy of Minsk. For maneuvering of the Belarusian President, there are strictly defined Moscow’s strategic borders, the violation of which may cause an aggressive reaction of Russia.

I can only imagine what will happen if Belarus have expressed the desire to withdraw from the CSTO or the EEC. Besides, unreformed Belarusian economy largely depends on the goodwill of Russia, which is evident in the definition of special prices for energy supplies.

This does not mean that the West should give up on Belarus, as a state, “owned by the Kremlin.”

Doors should be open to improve relations, but it is necessary to look carefully, do not involve us in the process of Belarusian-Russian bargaining as the time argument of the dispute.

Did such an approach become more democratic Belarus? Did the involvement of Russia to solve questions of international security? Now Russia, rather, multiplies the insecurity in the world, and so the answer to both questions is negative.

However, although both States are far from democratic, their foreign policy is significantly different: Belarus does not seek to subjugate neighboring countries.

We must recognize that in EU foreign policy while cautiously, but increasingly, there are calls for more active cooperation with Belarus, it is not necessary to forget about its problems with democracy, but rather to wait the result of the strategic perspective. In turn, in relation to Russia to behave strategically, patiently and not get burned another attempt to “reboot”.

Judge of the Supreme court of Ukraine suspended for drunk driving