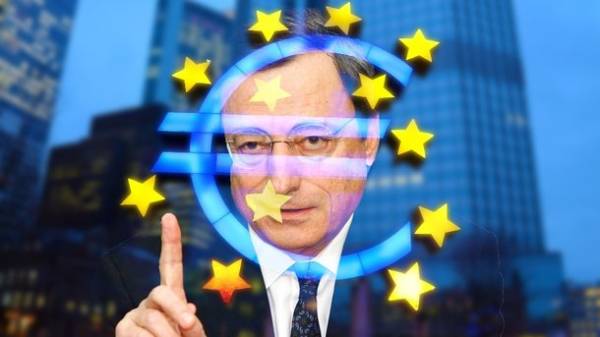 The Eurozone economy still needs monetary stimulus from the European Central Bank that inflation in the region is back and entrenched in the targets of the ECB. This was stated by the head of the European regulator Mario Draghi.

The Central Bank imposed a few years ago, a number of measures which were to contribute to the acceleration of excessively low inflation in the Eurozone and foster economic growth. We are talking about a zero rate ECB refinancing of banks in the currency bloc, negative Deposit rates for them, purchases of securities on the market.

The Eurozone economy is gradually recovering, but core inflation in the region remains insufficient for the ECB. This indicator is important for the regulator in the evaluation process of price stabilization in the Eurozone.

“Real GDP increased 16 consecutive quarters, rising by 1.7% year-on-year in the first quarter of 2017. Unemployment fell to its lowest since 2009 level”, stated Draghi.

“Despite the recovery, underlying inflation pressure remains weak, price pressures inside (of Eurozone countries), especially from wages are insufficient to maintain continuous and independent of the approximation of inflation to our objective in the medium term,” Draghi said.

The main objective of the ECB is to maintain price stability in the Euro area, including by holding annual inflation in the medium term at just below 2%. However, for several years now, not counting the last months, inflation in the region is kept substantially below this goal. Draghi said earlier that the actions of the ECB saved the Eurozone from deflation in 2015.

Annual inflation in 19 countries of the Eurozone in April, according to final estimates, accelerated to 1.9% from 1.5% in March, Eurostat reported. Draghi said that the strengthening prices within the Eurozone countries need a “very favorable financial terms”, which themselves depend on a sufficiently large volume of monetary stimulus by the ECB.

The regulator is due to its nonstandard actions in the field of interest rates and securities seeks in particular to improve the situation with lending in the Euro area. The statistics may say that it gradually manages. The annual growth of loans to non-financial corporations in the Euro zone beat post-crisis record up in April by 2.4% against 2.3% in March, and the annual growth of loans to households was 2.4%, unchanged from March, when the figure was the highest since the beginning of 2009.

According to Draghi, the ECB “remains convinced of the need for the (high) level of support from monetary policy” to secure an inflation rate of just below 2% in the medium term.

Why low inflation is bad?

Low inflation is a threat of deflation in which the decline in prices cannot be controlled. When people are waiting for even lower prices, all major acquisitions they lay, thereby weakening the economy even more.

Another danger posed by low inflation – unemployment. Low prices restrain the growth of incomes. But the government and households due to low inflation are not able to repay their debts.