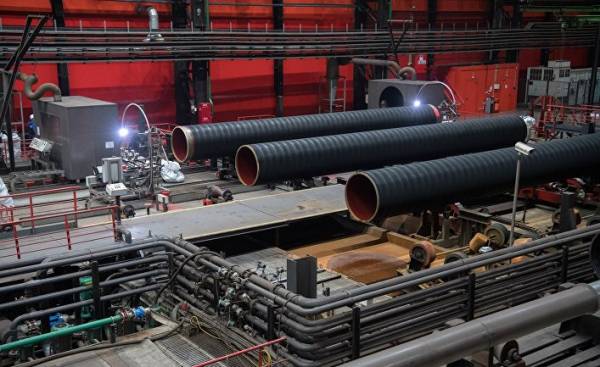 Caused a schism and powerful geopolitical tensions, Russian energy project this week has crossed an important threshold. The construction of the pipeline “Nord stream 2”, in which natural gas will be pumped from Russia to Northern Europe, on Monday received financial support from the Western energy industry, despite the loud protests of many EU members, who fear Moscow’s control over energy supplies to Europe.

Five European energy companies have agreed to provide a 50 percent long-term financing that caused great controversy projects worth 10.3 billion dollars. This Austrian OMV, French Engie, Dutch-British Royal Dutch Shell and the German Wintershall and Uniper. The second half will pay the Russian state company “Gazprom”, which will retain control of this project.

Funding is an important step forward for Gazprom, as it was preceded by a series of unsuccessful Russian initiatives. Russia will get the possibility to supply gas to the heart of Europe, but this time bypassing Ukraine. Thus, Russia will leave behind a transit country, which in the past gave her a big headache, with which she at present there is a smoldering military conflict.

“This is a breakthrough, — said the Agency Reuters, the head of Gazprom Alexey Miller. — This is a solid confirmation of foreign participation in this project, it is an important financial basis for the project is scheduled to be completed by the end of 2019”.

With annual capacity of 55 billion cubic meters of gas, “Nord stream 2” will double the capacity of Russia to deliver through Germany gas on European energy markets. According to the plans of Gazprom, the construction of a pipeline that will be laid on the bottom of the Baltic sea from the large Bovanenkovskoye field to German Greifswald, should begin in 2018 and end in 2019. Pipe for the project will deliver three Russian and one German company.

But the “Nord stream” at every turn meets a strong legal and political opposition. So, Poland has filed a lawsuit against its construction in the European court. Poland and the Baltic countries have become active opponents of this deal, claiming that it would allow Russia to tighten the noose around the neck of Europe and to reduce pumping of gas through Ukraine. (Despite hostilities between the two countries, Russian oil and gas continue to go through Ukraine to Europe, as both countries need the money.)

Five European energy companies signed the first agreement with Gazprom on the financing of the project in September 2015, but Poland has blocked it.

The current pipeline “Nord stream 1” is used only 50% of its capacity, which some experts doubted the economic viability of the second project, especially now, when gas demand in Europe grows.

However, other experts argue that this is a sensible commercial decision, because the pipeline will provide stable supplies to Central Europe without much transit risks. They also say that the construction of “Nord stream 1” in 2012, did not become a geopolitical catastrophe expected by some politicians and experts. Gas production in Europe in the next 20 years will decrease by half, and Gazprom have strengthened their positions in the market, which provides the company with substantial revenue.

However, this gas giant appeared disgusting habit to use energy as a political cudgel. Different countries it assigns different prices for the supplied gas, and after the collapse of the Soviet Union, the company repeatedly threatened the neighbors off or actually blocked them gas.

She shut off the gas to Ukraine in 2006, in the winter of 2008-2009, and the last time in 2015, when Ukraine’s conflict broke out after the illegal annexation by Moscow of the Crimean Peninsula.

Gazprom won the last battle with the five energy companies in Europe, but the war is far from over. Despite Western funding for the project, Gazprom remains the sole shareholder of the pipeline. According to de Jong, this means that his are big legal problems. EU members Denmark, Sweden and Finland, whose territorial waters have to pass the pipeline not yet agreed to his strip, which creates additional obstacles.

This year the European Commission ruled that the energy laws of the EU are not applicable to the marine “Nord stream 2”. Brussels hopes that he can negotiate with Moscow the agreement on the project, which will calm nervous members of the European Union and slow down the unscrupulous geopolitical ambitions of Gazprom.

But Poland and her friends do not give up. “The decision has not been made, and members can always sue the European Commission if they don’t like the result,” said de Jong.