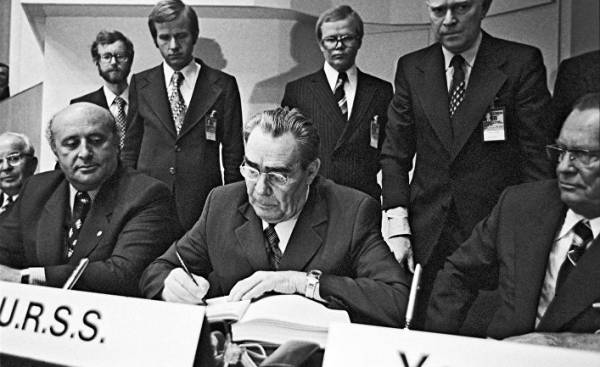 May 26, 1972, Richard Nixon and Leonid Brezhnev signed the agreement on the limitation of strategic arms (start). In connection with the anniversary of this event the newspaper Le Figaro offers to your attention a review of major Russian-American bilateral agreements.

Disarmament or limitation of the capacity of strategic weapons? The policy of nuclear deterrence during the cold war resulted in a frantic arms race between the two superpowers, which could lead to disaster. That is why 45 years ago, the United States and the Soviet Union signed the first agreement on strategic arms reduction.

On may 26, 1972, U.S. President Richard Nixon and General Secretary of the CPSU Central Committee Leonid Brezhnev signed an agreement on the limitation of strategic arms. The signing occurred in front of the cameras in the Vladimir hall of the Grand Kremlin Palace in Moscow. This event was the result of negotiations which began in ноябре1969.

The contract limited the number of ballistic missiles and launchers, their location and composition. Addition to the Treaty from 1974 reduced the number deployed by each party of regions ABOUT one. However, one of the clauses of the contract allowed the parties to terminate the contract unilaterally. This is what has made the United States in 2001 to deploy a missile defense system on its territory after 2004-2005. Date for final U.S. withdrawal from this agreement came 13 June 2002.

The 1972 Treaty includes a provisional agreement for a period of 20 years, which prohibits the production of launchers of Intercontinental ballistic land-based missiles and limit launchers of ballistic missiles on submarines. Also, under this agreement, the parties undertake to continue active and inclusive negotiations.

This “historic” agreement was particularly to help restore the balance of power of intimidation. And this does not apply to the production of offensive weapons and limitations in the number of warheads and strategic bombers. Strike forces of both countries was still very large. First, the Treaty allows both countries to reduce the costs while maintaining the ability of mass destruction. This prompted andré Proscar (André Frossard) write in the newspaper on may 29, 1972: “to Be able to hold approximately 27 parts of the world — the exact number I don’t know — gives them sufficient sense of security and allows them to deliver us from many of the advanced methods of destruction. For this we have to thank their good heart.”

Contract 2: relaxation of tensions between the two countries

After 6 years of negotiations, a new Treaty between the USSR and USA about restriction of strategic offensive arms was signed by U.S. President Jimmy Carter and General Secretary of the CPSU Central Committee Leonid Brezhnev in Vienna on 18 June 1979. This complex includes 19 articles 43 page definitions, page 3 with the list of the stocks of military arsenals of the two countries, page 3 of the Protocol, which will come into force in 1981 and, finally, a Declaration of principles that will form the basis of negotiations on OSV-3.

The Treaty limited the number of strategic nuclear weapons of both countries. After signing the contract, Jimmy Carter said in his speech: “These talks, which lasted continuously for ten years, give the impression that the nuclear competition unless it is limited to General rules and restrictions can lead only to disaster”. The American President said that “this agreement does not take away the need for both countries to maintain their military power”. But this Treaty was never ratified by the USA because of the Soviet invasion of Afghanistan.

The Treaty on the elimination of intermediate and short range

8 December 1987 in Washington, Mikhail Gorbachev and Ronald Reagan signed an indefinite Agreement on the elimination of intermediate-range nuclear forces (INF), which entered into force in may 1988. This “historic” Treaty for the first time included the elimination of weapons. It was about missiles and medium-range with a range of from 500 to 5,5 thousand km, which represents 3 to 4 % of the total Arsenal. In accordance with the agreement, the parties, within three years from the date of its entry into force, was to destroy all missiles and medium-range. The agreement also provided procedures for mutual inspections “on the ground”.

Start‑1: the beginning of real disarmament

31 July 1991 the US President George Bush and his Soviet counterpart Mikhail Gorbachev signed in Moscow an Agreement on the reduction of strategic offensive arms. This agreement was the first real reductions in the strategic arsenals of the two superpowers. By its terms, the country was in three stages (seven years) for a quarter or a third to reduce the number of dangerous weapons: Intercontinental ballistic missiles and submarine-based missiles.

The number of warheads would be reduced to 7 thousand for the Soviet Union and 9 thousand for the United States. Privileged position in the new Arsenal was given to the bombers: the number of bombs was increased from 2.5 to 4 thousand from the USA and from 450 to 2.2 thousand in the Soviet Union. In addition, the agreement provides for various control measures and finally it entered into force in 1994. According to Gorbachev, it was a blow to the “infrastructure of terror”.

Start-2: a radical reduction of

January 3, 1993 President of Russia Boris Yeltsin and his us counterpart George Bush signed the Moscow Treaty start-2. It was a great event because it involved the reduction of nuclear arsenals by two-thirds. Once the agreement has entered into force in 2003, the us reserves were to decrease from 9 thousand 986 warheads to 3.5 thousand, and Russian — from 10 thousand to 237 thousand 3 027. That is, to the level of 1974 to Russia and 1960 for America.

The contract was written and another important point: the elimination of missiles with multiple warheads. Russia has refused from high-precision weapons, which was the basis of its deterrent force, while the US removed the half installed on submarines missiles (almost not detectable). Start-2 was ratified by the United States in 1996 and Russia in 2000.

Boris Yeltsin saw it as a source of hope and George Bush considered it a symbol of “the end of the cold war” and “free from fear for a better future for our parents and children.” Anyway, the reality is there are not so idyllic: the two countries still can be several times to destroy the entire planet.

SNP: the point in the cold war

On 24 may 2002, presidents George Bush and Vladimir Putin signed in the Kremlin the Contract on reduction of strategic offensive potentials (SNP). It was about reducing arsenals by two-thirds in ten years.

However, this small volume of bilateral agreement (five short articles) were not accurate and did not contain verification measures. Its role from the point of view of the image of the parties was more important than its content: on the reduction spoke for the first time. Whatever it was, it was a turning point, the end of military-strategic parity: not having a need for economic opportunities, Russia renounced all claims to superpower status. In addition, the Treaty opened the door to a “new era” because it was accompanied by a statement of a “new strategic partnership”. USA relied on conventional forces and saw the futility of much of its nuclear Arsenal. Bush noted that the signing of SNP allows to get rid of the “cold war legacy” and hostility between the two countries.

April 8, 2010, President Barack Obama and his Russian counterpart Dmitry Medvedev signed the new agreement on reduction of strategic offensive arms (start-3) in Spanish living room of the Prague castle. It was intended to fill the legal vacuum that arose after the expiration of start 1 in December 2009. It was installed new ceilings for nuclear arsenals of the two countries: the reduction of nuclear warheads to 1.55 million units, Intercontinental ballistic missiles, ballistic missile submarines and heavy bombers to 700 units.

In addition, the agreement provides for verification of the numbers by a joint team of inspectors seven years after its entry into force. It is worth noting that the established level is not too different from those which were listed in 2002. It also does not mention tactical nuclear weapons, thousands of deactivated warheads in warehouses and bomb strategic aviation. The U.S. Senate ratified it in 2010.

Start-3 was the last American-Russian agreement in the field of control over nuclear weapons. A few days after taking office in January 2017, the President of the United States Donald trump said it will offer Vladimir Putin the lifting of sanctions against Russia (was introduced in response to the annexation of the Crimea) in exchange for an agreement to reduce nuclear weapons. According to the latest us state Department, the US has 1 367 thousand warheads (bombers and missiles), while the Russian Arsenal reaches 1 thousand 096. 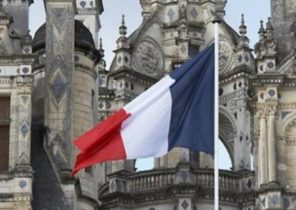