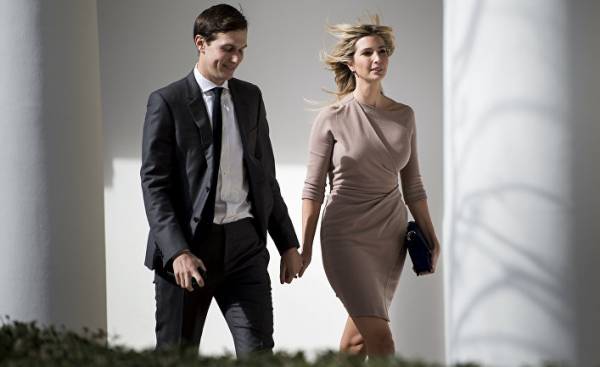 Published by the newspaper The Washington Post the news that the FBI is investigating the meeting Jared Kushner (Jared Kushner) with the Russians, the news led the investigation, “the Russian business” to a new level, more closer to President Trump. Now it came to people of higher rank of the former electoral staff and affected close Advisor and son-in-law of the President. In addition, this news reminds me of a strange episode that demonstrates how Kushner and the White house tried to explain the nature of their Russian contacts.

In February, shortly after the national security Advisor Mike Flynn (Mike Flynn) has resigned due to the fact that he lied about his conversations with the Russian Ambassador Sergei Kislyak, I heard that the two men met with Kouchner. I knew that if all this were true, then this is. Informed about any contacts between Kouchner and Russian officials, was not reported, and when Flynn’s in administration now, clearly mattered. February 23, I asked one high-ranking official from the White house, met these three. The official said to me that I check with Kouchner.

A few hours later the officer called back. “From Jared and I found out that he has only met with Sergei and the meeting lasted only a few minutes,” said the official. I asked the official about Flynn. Was he there, too? No, said the official. “It was a very short meeting to understand what was the role of Sergei. And who he was in contact with Moscow”, — said my companion. In any case, he confirmed that Kouchner met with Kislyak, and I included this in an article written by me in collaboration with David Remnick (David Remnick) and Joshua Yaffa (Yaffa Joshua) and published on 24 February.

However, the story is not over. The second of March the Times newspaper reported that Flynn was actually present at the meeting Kouchner Ambassador. The next day I called the senior official and asked why he denied that Flynn was there. The official admitted his mistake, saying that he couldn’t figure out the details. Kouchner refused to talk to me, so the opportunity to learn more about what he said to my colleague, it was not.

Why is all this important? But because numerous errors committed by the White house, describing Russian contacts Kouchner, now is the interest of the investigators. None of the media representatives in Washington not surprised when the administration — any administration — is telling you something is not quite right. But this case is not an attempt to smooth the effect of any political solution and not a desire to downplay the significance of any failure of the initiative. It is a distortion of the true facts. Last month the Times reported that when completing their profiles on the category of access to classified information Kouchner did not specify two meetings with the Russians — Kislyak and Sergey Gorkov, the head of “Vnesheconombank”. It is a state Bank, which is under US sanctions. Lawyer Kouchner said that after discovering the error he offered to include in the questionnaire.

We still have much to learn about why Kouchner was in “center of attention” of the investigators. Maybe the FBI is trying to figure out his role in a possible cooperation of the Kremlin with the electoral headquarters of the trump? Or to investigate attempts to hide it? Or reveal something that points to an invalid financial transactions with companies backed by Russia? In reporting on the expanding investigation, “the Russian intervention” refers to all of these possible versions.

Kouchner, who rarely speaks in public, volunteered to serve in the congressional committees that are investigating “Russian intervention”. His lawyer said that Kouchner is willing to talk with investigators if asked to do so. Readings obtained directly from the son-in-law of the President, can you clarify the situation or further confuse her.