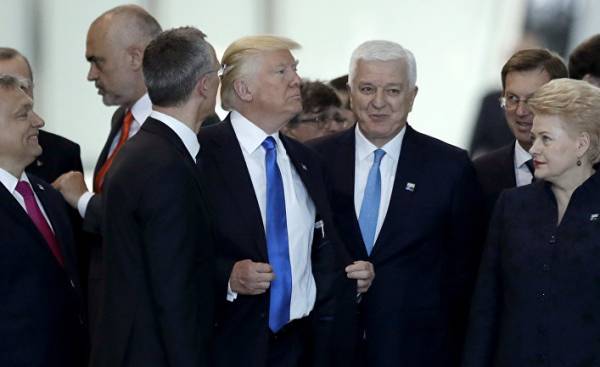 European leaders had hoped that President trump openly support the fundamental article of the NATO Charter on collective defense during his visit to Brussels, although during the presidential campaign he claimed that the Alliance turned into a dummy. Trump is not supported.

Speaking at the opening ceremony of the new headquarters of NATO, trump criticized the allies for what they allocate enough money on defense than confused its audience, which consisted of the heads of state. In addition, he had a nasty run-ins with other leaders, underscoring the tension that exists in U.S.-European relations after the arrival of the trump to power.

He scolded allies for the “chronic underfunding” of NATO, stunned statesmen, former heads of NATO and authoritative experts.

“It’s not fair to the people and taxpayers of the United States, said trump in his speech. And many of these countries owe for last years huge amount since it was not paid in the period.” (Trump countless times explained that the country does not pay the required contributions to the NATO budget and in the budget of other agencies such as the UN.)

*Look at their faces and the whispering as Trump admonishes leaders over NATO financial obligations. pic.twitter.com/gLCYgKTdi3

​
@BraddJaffy
Look at these faces as they whisper, when trump admonishes them for failure to meet financial obligations to NATO.

Currently, the requirement of the Alliance to allocate two percent of GDP on defense perform only five of the 28 NATO members: the United States, Britain, Poland, Estonia and Greece. Such neglect for decades, is a strong irritant in relations between the United States and NATO, however, trump has given this debate a new urgency, questioning the values of the Alliance and openly praising during the presidential campaign, his sworn geopolitical enemies of Russia.

Trump said that he was very candid and talked to NATO Secretary General Jens Stoltenberg and other leaders about the need to increase military spending.

“We must recognize that against the background of a chronic shortfall in payments and the growing threats even those two percent of GDP will be insufficient to reduce the backlog in areas such as modernization, readiness and size of the armed forces,” he said.

Another extremely important signal was that trump refused to openly confirm the value of the provisions of article 5 on collective defence, which underpins the unity and cohesion of NATO since the creation of the Alliance in 1949. It says that all NATO members will come to the aid of any of its allies in case of attack on him. Trump gave a speech in front of a memorial in memory of the September 11 attacks. Then the only time in history were applied to the fifth article to protect the homeland trump.

His reluctance to publicly reaffirm this fundamental principle may trouble American allies, already very nervous, fearing that Washington will come to their aid if they are attacked.

Trump spoke about the terrorist threat, however, did not elaborate on the Russian threat and reassure the allies, allowing another shot. The Baltic countries are particularly alarmed by Russia’s actions to increase the military presence near their borders, fearing that the Russians would be able to defeat them. They hoped that the United States, as usual, will give them iron guarantee, but they had to be disappointed. “Of course, it’s not quite what I was hoping to hear the Europeans, told Foreign Policy the former head of the Pentagon Derek Chollet (Derek Chollet), now working in the Marshall Fund. — These allies are very much worried about their future. They believe that Russia poses a threat to their existence. They live every day in such a concern.”

Shocked by the omissions of the trump experts and former U.S. officials subjected him to sharp criticism.

“The behavior of trump at the meeting of NATO in Brussels was definitely a victory for Putin, — the expert said at the NATO Atlantic Council Jorge Benitez (Jorge Benítez), who was present at the Brussels summit. — His actions only strengthened the doubts, fears and concerns of allies.”

“Every American President since Truman has pledged to comply with article 5 and promised that the U.S. would defend Europe. Trump today did not. A big mistake,” tweeted the former U.S. representative to NATO Nicholas burns (Nicholas Burns).

In addition, there was the opinion that if trump will confirm to the allies the same thing about military spending, it will lead to a negative reaction. “It may provoke a response, when the leaders say, and fuck yourself, trump, hell, we do not intend to appear before the people as weaklings, inferior to you in all, said Jim Townsend (Jim Townsend), who until January was chief representative of the Pentagon in NATO. — It is unworthy. The American President should not resort to such tactics”.

“The United States are members of NATO, and therefore, it is clear that we support all the articles of its Charter,” he said of the journalistic pool of the White house.

The public fared no better, because passive aggressiveness showed itself in all its glory. French President Emmanuel macron did not want to give Trump the power of a handshake when he greeted the leaders of the NATO countries.

Macron blows off Trump, Trump responds by trying to rip his arm off? This is insane. pic.twitter.com/cPlPg7N72X

​
@calvinstowell
Macron compresses the palm Trump, and trump in reply, trying to tear his hand? It’s a kind of madness.

There was another moment that made many wince when the tramp pushed the head of Montenegro, Dusko Markovic, making his way into the first row during the collective photographing.

Did Trump just shove another NATO leader to be in the front of the group? pic.twitter.com/bL1r2auELd

​
@SteveKopack
Trump just pushed another NATO leader, to be ahead of others?

(Background: Montenegro is struggling sought NATO membership, causing great displeasure of the Kremlin. It is expected that next month she will officially accept the Alliance. Trump personally gave permission for her entry.)

After the speech, and several intense meetings with colleagues trump and other NATO leaders gathered on the stage to be photographed. Then they mingled and began to converse with each other. None of the leaders of the NATO countries did not come to talk to trump, when he went out.