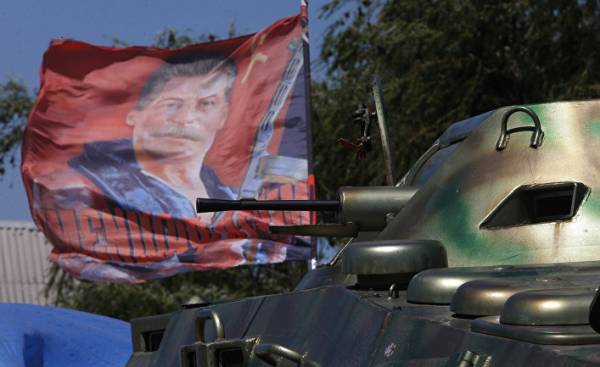 From the reports of the foreign media in October 2015: the journalists of the British newspaper the Daily Telegraph wrote about the “cult” of Stalin on the streets of Donetsk, in confirmation of what has published photos of posters on the streets with a portrait of the Generalissimo and the words “the enemy will be defeated, victory will be ours.” According to the Ukrainian journalists of the TV channel “inter” in January of this year: in Donetsk opened a new cafe called the owners of “Koba” is one of the party alias of Stalin.

Sometimes I think that Ukraine deliberately and humiliating turn into a giant “theater of the absurd”.

At the beginning of April 2015, the Parliament passed four laws on so-called “decommunisation”, which in may signed by the President Poroshenko. Them, completely ignoring the rule of law, according to which crime a particular organization can recognize only the court, they declared the Communist party and Communist ideology, and heroes of Ukraine are required to consider, for example, followers of Stepan Bandera.

Think about it, that happens. The conflict in the East of the country. The economy is failing. The authorities consistently, every day destroys the Bank for the Bank, and with them the savings of people. I am sure that in Donetsk at that time the economic situation is not better. The sharp rise in crime across the country. The then Prime Minister Yatsenyuk at an incredible pace, anticipating all the wishes of the IMF, increases in utility rates. Rising prices for gas and electricity leads to the fact that everything else automatically becomes more expensive.

I am sure that the “cult of Stalin” and a return to the history of Stepan Bandera pursued, regardless of who initiated these actions, the same purpose: to distract people from reality, from problems in the economy, to inspire them with some emotion and, of course, adjust some of the citizens of Ukraine against the other, in fact their neighbors.

I’m not a Communist, and will not support the revival of the “cult of personality”. Let’s leave history to historians. But I’m not a nationalist, who believes that only in the history of the OUN should be sought to the Ukraine unconditional heroes. In the end, put himself the question, he would like Stepan Bandera to his name shared the Ukraine?

I’m a lawyer, and will never agree with the fact that the Parliament has the right to prohibit the activities of any party, including the Communist. The ban of the organization — it is exclusively the court. Will never agree with the fact that, according to the laws on “decommunisation”, under the renaming of streets have fallen had never been members of any Communist party a historical figure Spartacus, Karl Marx and Friedrich Engels.

History of Ukraine is what it has developed. This is Stalin’s repressions before the war and after it. It is the victory in the great Patriotic war, which is part of the Second world war. But it is also the period from 1964 to 1982, when the Soviet Union was led by Leonid Brezhnev — 12 of the 18 members of the Politburo, the top leadership of the USSR were ethnic Ukrainians.

Not in favor of political interests to rewrite the history of our country. Change the power, leave in the past the current hard times, and the seeds of hate sown among our people, will sprout in future generations. You know those who impose Communist or nationalist version of history that they vented to each other is not only present but also future generations of Ukrainians?

What you need to ensure that historical memory has ceased to divide Ukrainians?

The most important thing: to stop speculating on the pages of the past, leaving them to the scientists. Secondly- understand that the assessment of certain characters is the business of historians, archivists, not the lawyers who operate in the modern system of Ukrainian law, which has no relationship to the actions of Stalin, Bandera and other figures of the past. Thirdly, to study the positive experience of countries that have developed a relationship to the past.

How to relate to their own difficult historical heritage, shows us the experience of Austria, member of the European Union, the country defeated in the Second World war.

According to the documents of the Moscow conference of 1943 and official, decorated by 1949, “the doctrine of sacrifice”, Austria and Austrians were victims of the Hitler regime and therefore not responsible for his crimes. The incident in 1939 the “Anschluss” of the country was legally qualified as the takeover of democratic Austria of a totalitarian Germany. Contemporary Austrian historians writing about that period: “everyone stops talking about the past. Personal and historical past have disappeared under the veil of ignorance, separating this dark history from the creation of a flourishing future.”

They write that public discussion about its history as part of Nazi Germany, held in Austria only in 1986, in the case of the then President Kurt Waldheim — that is, 41 years after the war.

Hence the first lesson of Austria to Ukraine: remembering the past, thinking about the future!

The same way, and went in postwar Japan. Among the then leaders of Western countries, the US and the UK had the sense to agree at the Tokyo international Tribunal in respect of Japanese war criminals — it is similar to the Nuremberg Tribunal. But while the West has out of the brackets the figure of the Japanese Emperor, sanctioned the participation of his country in world war II, although the textbooks at all levels have removed the glorification of the Emperor and militarism, banned the flag salute, singing of the national anthem and bowing to the Emperor. But the Emperor himself did not “dekommunizirovali” because he knew that his authority is founded psychological structure of Japanese society.

I cited the examples of Austria and Japan to show how conditional division on the experience associated with “integration”, and say, “asianinterracial”. We need to learn from experience, smart countries, smart people.

We cannot go into the future with a head turned back. Ukraine can unite not only the history, the place in which all decent people. First and foremost, we must unite the future of the country!

In order to build that future, we need to decide. To what countries and in what sectors of the economy Ukraine — is either an ally or partner, or competitor. As in the UK, our country should “adopt” the principle “is neither eternal allies and no permanent enemies, but permanent and eternal our interests.”

We must accept the statement that our allies are our army and Navy.

To determine which countries and in what sectors of the economy Ukraine is either an ally or a partner, or a competitor, we will formulate for itself the main thing: the place of our country in the global world market, labor and capital. We are aware of which areas of industry we should develop and what, perhaps, to discard or keep for domestic consumption. This is the only way to restore sovereignty, independence, economic self-sufficiency of Ukraine.