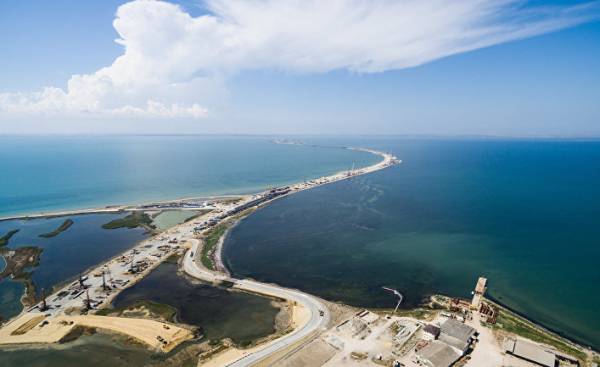 Although Western sanctions against Russia that were imposed in response to the annexation of the Crimea, is still in force, European investors have one eye on the Peninsula. The more that his isolation would soon be broken by using a “bridge Putin.”

All this is a great project for Vladimir Putin. Three years after the annexation of the Crimea dreams arise about the economic boom. “Attract millions of tourists, modernize infrastructure, create centres of high technology… Here you can build anything!” — does not hide his enthusiasm Oleg Morozov, the young CEO of the Corporation of development of Crimea, which was established by the authorities to promote the economic growth of the Peninsula (de facto it is part of Russia after the annexation of 2014, however, de jure is still Ukrainian). Around entrepreneur actively working politicians and businessmen, guests of the Yalta economic forum. This event was held in late April in the new five-star hotel on the coast: the Kremlin and the local government spared no expense to attract Russian and foreign investors.

“By 2020 goal, we will launch two large technology Park on 120 hectares. European partners have already given us consent to become their residents,” — says Oleg Morozov, refusing however to clarify what “Italian and German investors” showed interest in the project. The fact that at the moment, any agreement in principle, impossible: the Crimea is the subject of us and European sanctions. “Specifically, prohibited are investments, trade and transfer of technology. Violation may lead to prosecution, especially in Europe,” — said attending the forum in Yalta, a French lawyer and expert on international law Pierre-Emmanuel DuPont (Pierre-Emmanuel Dupont). On the sidelines he is frequently approached for advice and recommendations. The fact that many, both Russians and Europeans arrived there thinking about projects.

“Crimea is nice 50 years ago! The potential is huge. Today we need to comply strictly with sanctions. But we need to look to the future, to be ready at the right time. Not to let the Americans beat us in Iran…,” says the French businessman Jean-Pierre Thomas (Jean-Pierre Thomas), who was formerly special envoy of President Nicolas Sarkozy to Russia.

At the Yalta forum, he behaves relaxed and smiling crowd of Russian guests. In their conversations, the sanctions seem something receding into the past. “Interim measures! — laughs head of the local chamber of Commerce Artem Maltsev. — In addition, tourism, logistics, construction and agriculture, we have talked with foreign investors. Some even registered here their companies to prepare for the time when the sanctions are lifted…”

“We are not afraid of scandal”

In this crowd of self-confident people who are strangers to the allegations about the manipulation of Moscow on the return of the Crimea and sustaining of the conflict in Eastern Ukraine, one delegation stands out more than others: in Yalta came about fifty Italians. “Sanctions do not prohibit us from today to build strong political ties,” says Edoardo Crowns (Edoardo Rixi), responsible for trade issues in the guide of Liguria, one of those Italian regions, where he decided to cross through the ban and come to the forum.

“We are not afraid of scandal. The priority for us is the economy of our region. We see prospects for business partnerships, in particular with the Crimean ports. When the Peninsula was Ukrainian, he almost did not represent for us interest. But now it is getting access to the Russian market!” — he considers. Some Italians are already taking concrete steps. “Everyone knows what needs to be done to bypass sanctions: work through a Russian company”, — explains one of them.

French companies also show interest. “This came to explore the representatives of several companies engaged in tourism, wine making, cosmetics and urban development. However, they do it without attracting attention, together with the Russian delegations…” — says an informed source, without naming names. In addition, agriculture, which constitutes one of the key branches of Crimea, local producers continue to cooperate with European partners.

“After joining we were separated from our suppliers and even could no longer import spare parts. Today we started the expansion with purchases of European equipment”, — says Igor Polishchuk, head of the dynamically developing family-owned enterprise “Skvortsovo”. Among his recent acquisitions is the Danish Skiold equipment for grain and the Dutch Van Amerongen for apples. “To bypass the sanctions had to use the services of intermediaries,” — he admits candidly. In addition, he acquired a refrigerated truck Chereau and is negotiating with the Manitou on the purchase of eight vehicles. “Of course, through intermediaries!”

Anyway, the economic Eldorado of Crimea will not be called. Because of its geographic isolation: in 2014, Ukraine completely stopped the transport message with him. As a result, all supply is fully dependent on Russia. Transportation is by sea. This entails high prices and still have a serious inflation. Remains and many other economic problems. First among them is corruption.

“After acquired in the Ukraine, addictions, Moscow imposed a strict control. The signal was sent, and the pressure is on… People are afraid, and corruption was less,” — says Anna Efremova, Director General of the construction of the metallurgical plant. “Nothing like that! Corruption has become even worse than before. If Ukraine were only bandits. Today, as soon as you have something invested, you are attacking the Russian administration. And there is nobody to complain, because the courts and the media runs the new leadership that pushes their friends everywhere” protests, a prominent representative of the Crimean tourism industry, Oleg Zubkov, who heads a large zoo.

Moscow promised to invest a total of € 10 billion in the development of the Crimea. This financial burden becomes even heavier that the Russian national budget is still can not recover after two years of recession. Anyway, these realities do not apply to the Crimea: although transfers from Moscow to the development of other regions was reduced in 2016 by 4%, investment in the Peninsula grew by 18%.

In particular, the government had to spend money to do away with interruptions in electricity and gas, which until recently was carried out by Kiev. In December launched the gas pipeline in the Crimea, and in may of 2016, Vladimir Putin was present at the surrender of the last section of the transmission line. Whatever it was, Ukraine was also 85% of fresh water. Kiev blocked this channel. To solve, especially in agriculture, was dug new wells, but the water has a high salt content due to the proximity to the sea.

But the most important project of the Kremlin to break the isolation of the Crimea became the “bridge Putin.” It needs to provide rail and road links between the Peninsula and Russia.,The Kremlin has allocated nearly 3 billion euros for the implementation and not embodied in the USSR draft, which has now become a national priority. Now in the open sea where the wind howls and the rain obscures the view, operate cranes, and weld sparks. “Our families will finally be able to ride properly”, — says enthusiastically Leonid Regency, construction Manager, where working day and night 7 000 workers.

“The main difficulty for us — geological conditions and climate change,” he explains. The construction of the bridge is under U.S. and European sanctions that block access to Western financing and technologies. In Russia were considered more than 70 projects (including tunnels), but in the end the experts decided on the winding bridge (to bypass the sandy and marshy soil) with a long of 19 kilometers (the longest in Russia). Not an easy task. Some props have to dig in to a depth of 90 meters.

The trump card for tourism

A quarter of the allocated funds was spent. However, were completed, and a quarter of work. The Kremlin has set two dates: the end of 2018 for roads and the end of 2019 for the railway line. The capacity of the bridge will be 40 000 cars and 47 trains per day. All of this means, according to forecasts, 14 million passengers and 13 million tons of cargo per year. “Crimea has long needed break isolation. The bridge will make transportation of goods and equipment more easy, frequent and cheap. The same applies to tourists,” recalls independent economist Natalya Zubarevich.

All this, however, does not negate the doubts about the financial transparency project, which is fully paid by the state and conducted without a tender. For reasons of speed and effectiveness the implementation has been entrusted to the friend of Vladimir Putin Arkady Rotenberg, who is an old sparring partner of the President and one of the main participants in the construction of Olympic facilities in Sochi. Another provocation against the West. The fact that due to his connections with the Kremlin and controversial past contracts Rotenberg himself is under sanctions after the annexation of Crimea. 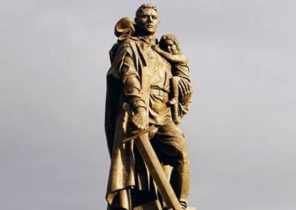 Eternal fire is extinguished: rethinking of relations with the USSR is reflected in the monuments