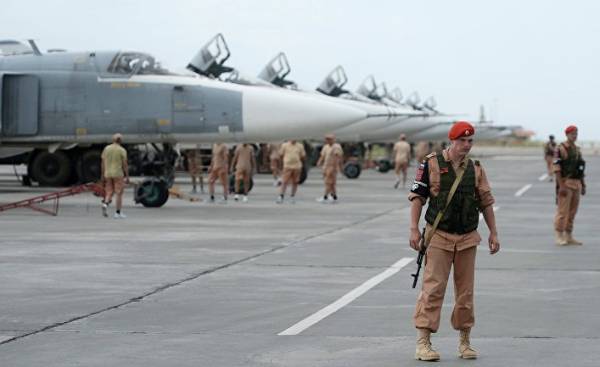 Revolutionary forces of Syria, Dr. Abdelkader Manal: since 1991, the Syrian media reported about the cultural activities, but after the beginning of the Syrian revolution, they suddenly have completely devoted their activities to writing political obituaries. They published hundreds of articles that expose the legend of the regime of Bashar al-Assad denied his lies…

Everything that made the Russian mafia in the land of Syria, is the so — called “service” to the Syrian people, provided with the purpose of preserving the unity and security of Syria and its national sovereignty.

During numerous trips from Moscow to Washington, foreign Minister Lavrov of the Russian mafia was shamelessly brought with him the false story that they again and again repeated, like a broken drum in the ears of the President of the United States Donald trump. Because he believes that they will affect the political view of America.

The issue is not the personality of Bashar al-Assad, and the fear of the disintegration of the state and its institutions… the Fear that Syria will face the fate of Iraq and Libya — the only thing that is forcing Russia to defend the regime of Bashar al-Assad.

The Russian preposition itself is completely false, he doesn’t even give people the chance to believe what Russia is doing. Then what the Syrian government say Russian?

If we assume that the state is still something left, what does Bashar al-Assad in order to preserve these remnants of the country?

Whether Assad is the real authority in addressing the key issues in the country today, or the greatest power given to him, lies in the dissolution and disbanding of the women’s Union, the publication of the decrees concerning import of cars, or the conditions of open real estate offices and decrees related to the new lease terms?

What makes Bashar al-Assad but is found with some hired journalists mostly support Russia, in order to drink with them at Ayn al-Figg (water station supplying potable water to Damascus — approx. ed.), remaining under control through the blood of his people, who were killed during the years of siege and starvation, and those survivors of them soon emigrated and left the country with the help of the Russians and the Iranians?

So what will change in Syria, if she will lose Bashar al-Assad?

All, primarily Russian, it is known that Bashar Assad’s limited powers, and that its overthrow will not affect the situation in the field of security. In addition, everyone also understands that the departure of Bashar al-Assad will be the beginning of a solution to the Syrian problem, and, consequently, the continuation of the Russian “novel” only guarantees the extension of the fire in Syria, and that is what counts and Russia.

All this destruction, devastation, murder, detention, destruction and emigration, missiles and bombs to destroy large areas of Syria are forbidden at the international level.

The whole military force which crossed the sea, and launched the machine of killing and destruction, was created only in order to save the state and its institutions.

Since the first veto of Russia and even the actual military occupation, the Russians played the most significant role to make the fate of Syria is even more appalling and disastrous than the fate of Iraq, Libya, Yemen and Palestine. The situation in Syria shows all the Arab disaster. However, a blind Russian bear ignores the obvious consequences of their actions. Russia makes some of the affected countries to heed the lessons of Syria, so that they could avoid such a scenario in order to rejoice the situation in their capitals with the situation in Damascus…

The fate of Iraq and Libya exposes political stupidity and paralysis of the mental faculties of members of the Russian mafia. The real situation in these countries today, even in the midst of conflict is far better than the reality of the Syrian as a country headed by Bashar al-Assad. In any case, after Assad’s position has deteriorated, but it will not be worse than now. On the contrary, effective the beginning of starnine consequences of the Syrian disaster cannot begin without the overthrow or death of Assad. The solution would be much faster and more fair if the Governor and his party tried not only for the establishment of his justice, but also for the retention of the remaining criminals and bringing to the fore the issue of unbalancing the human values, the destruction of which contributed to the Russian, who defended the idea of the crime…

Russia has made an enormous contribution not only to the destruction of Syria, but also contributed to its destruction by the forces of the various militias, providing them with protection as well as political and military support for many years. Moreover, she continues to make every effort to maintain a state of war in the country, considering the position most suitable for investment at this stage…

Despite the magnitude of the perfect Russia of iniquity in the Security Council, the criminal statement that Moscow wants to preserve the Syrian state and its institutions, will be the largest of all. They will be recorded in the criminal archives of the Russian lies, contradictions and public fraud due to the absence of reasonable excuse, the permanent of myths and false information, that uses the gangster regime in Damascus. Russia took this taunt only to subsequently at the international level to contribute to the distortion and destruction of human values, replacing them is criminal.