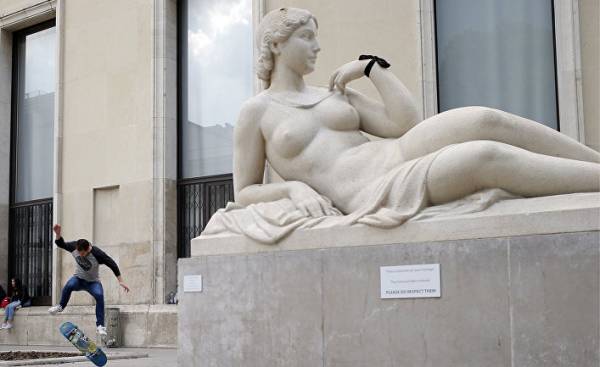 School unions are trying to draw attention to the sexism, which now prevails in the relations of boys and girls from a very young age, by the “day of the skirt” 19 may, and yesterday’s events only underlined the importance of this initiative: women’s rights are encroached, and politicians still turn a look. Comes to the fact that in some places now the appearance of women on the street is perceived as a provocation and endangers her.

And we are not talking about ar-Raqqah, Riyadh or Kabul, but, alas, Paris. And not even about the remotest suburbs. Published in Le Parisien on 18 may report “Paris: women chased from the streets in the neighbourhood of Chapelle-Pagol” Cecile Beaulieu (Cécile Beaulieu) describes the daily life of the inmates of the district, which may not appear on the street unaccompanied, to wear skirts and tight clothes, while taking care to avoid the shaft of the insults or even aggression. Streets, sidewalks, cafes, bars and squares — all of this for them under the ban. It turns out that way it becomes a misdemeanor. This area belongs to men, and they set their own rules. This situation applies to most low-income areas.

Anyway, most striking in the medieval imposition of such order, the oppression of women in a country where the word “equality” written on pediments of all public buildings, is the reaction of the authorities. More precisely, the lack thereof.

To be a woman long enough to be in danger in some places and among some groups of the population. This does have in common with the shocking events of 31 December in Cologne. As shown by the result, there occurred massive sexual aggression was the handiwork of refugees and economic migrants who came to Germany from Morocco and Algeria during the year. And what do you think that was done? Nobody wanted to think about why these people considered that the right to behave this way in their adopted country began to understand the cultural basics, which are acceptable violence against women and the obligations of migrants to the new state. Instead, they began to blame the racism of all those who condemned the cultural Foundation, in which the woman is inferior and the property of men, or all if she’s daring enough to assert their rights. This phenomenon is amplified on the background of the rise of religious fundamentalism in the middle East. For mentioning this aspect of the problem of Kamel Daoud (Daoud Kamel) almost nailed to the pillory.

In Cologne the mayor advised the women to dress modestly and stay away from men. Though they have partly themselves to blame for the fact that you are a victim of aggression. And, you know what they say in France, women living in the capital of our country who are deprived of provided by law all civil rights? First of all, to apply is meaningless. That is, in France you can be deprived of freedom of movement, because you are a woman, and nobody cared. No one to do anything, because the authorities just laugh about it, for them it is a joke. That’s what it means “to apply is meaningless.” The article is about police operations since January as many as 110, but they did not let. But if they were accompanied by expulsion and severe punishment, the results no doubt would have looked completely different. But if the detainees return in just a few days or even hours, it all becomes a symptom of the impotence of the authorities only reinforces the evils intended to prevent.

The report also referred to the Deputy responsible for the equality of men and women in the city hall of the XVIII district of Paris. She proposes to carry out reconnaissance procession to mark the places where women turn out, and where they have been badly treated. “Their comments will be considered very carefully”. I have no doubt that she is well aware of the ridiculousness of his appeal to women to put themselves in danger for the sake of such topographic studies. She probably realizes that such actions do not reflect the law and the duty of government to protect the population, but it, apparently, has nothing more to offer. The fact is that the aggressors belong to the poor and marginalized segment of the population that rises in rank an absolute sacrifice. Therefore, their transformation into torturers would be paralyzed political rhetoric and actions. But the citizens see that their rights do not matter, and freedom are not protected. All this explains the strengthening of the position of the National front is much better than the rise of fascist sentiments.

Meanwhile, traders, dealers, migrants and smugglers keep the streets in their hands and because of political correctness. We are not saying that this medieval mentality and obscurantism, every day gaining strength, associated with the desire of these people to impose their adopted country, their Patriarchal system, a narrow vision of relations between people, and is also riddled with inequalities and limits of the social order. We do not say that this population becomes the target of fundamentalists and supporters of political Islam, which is red insulation on the basis of identity and are undermining the foundations of Western societies to a single axis of socio-political self-assertion of communities that are affected by their increasingly strong influence. They believe that the right to do all this, because nobody in the government does not consider it necessary to explain to newcomers the rules of conduct and even more to enforce them. As a result, these people tend to recreate their familiar surroundings, and once they are on the fringes of society without any prospects, they’re trying to feel like men and masters of life with power over women. They are inspired by it idiots, preachers, who were granted complete freedom of action in our country. I’m not trying to blame all the migrants (that would be unfair and offensive), but only raise the question of our unwillingness to defend his own and to deal with conduct which does not deserve respect and tolerance, and also refers to the obscurantism and despicable aggression. The authorities don’t have to get all that to a screeching halt.

All this we have already seen: recall reportage Antenne 2 from Sevran and Wierman where a man drove women out of the café with the words: “This is not Paris!”

It means, “everything belongs to us, and you should know your place.” In addition, it turns out that part of its territory France does not exist, and its laws do not apply. Public space is no longer shared. In some areas it belongs only to those who exist in society, that is men, and not their ownership, which only exists in the sphere of intimacy. For criticism of these phenomena, which apparently did not have the slightest idea, few of us power, the journalist of France 2 and Remand Nadia (Nadia Remadna) from “Team mothers” was subjected to fierce attacks from the le Bondy Blog. In addition, those who began to speak about the report, as usual, the move was accused of lying, racism and fascism. And all this in spite of the growing number of testimonies about the attempts of France to impose apartheid by gender.

Today we need to ensure that our core principles apply to all to guaranteed by the law of liberty is not dependent on our cultural and social level or place of residence. This is the essence of policy: to protect the rights of all who live in the country. To achieve this will not work without the rigidity and fairness.

Today the law provides protection only to those who are in the center of society, has the means to choose their environment. For many others it turns out to be a return to the middle Ages: they have to obey the neighbors and the men on the street, because the law no longer protects. In was under the influence of the Islamists zones often hear phrases like “so”. “We” means France, while uttering these words, the people — the French. Moreover, it may not even about the orders of their native country, and on a mixture of tradition and religion, which Islamists provide the basis formed by them mentality. That is why the number of aggressive actions increases: they become a kind of initiation rejection of citizenship and adoption of Patriarchal values with religious beliefs. All this against the background of impunity for aggressors and the condemnation of those who consider the devil-may-care attitude of the authorities a serious political offense.

Meanwhile, our new government was in favour of liberalism in the sphere of a secular society, promising to fight Islamism. Only here one does not fight against those who wish us death, if we refuse to its own principles and ideals in this area. Tolerance here is equivalent to the decision to leave the weak at the hands of their oppressors. It would be very unfortunate if, because of the blindness in these matters France will become a country that protects only the rights of those who have sufficient resources to themselves to choose their neighbors and the environment.