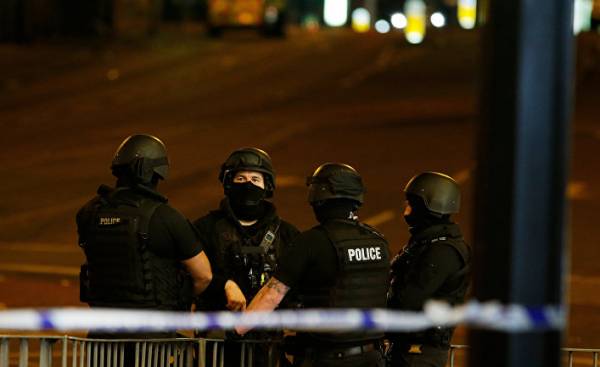 While there is no information about the identity of those who are responsible for the bombings, in which 22 people were killed and at least 59 injured. However, according to NBC News, officials of the United Kingdom and the United States have stated that they may have already established the identity of the perpetrator of the terrorist act. On Tuesday, may 23, the chief constable of greater Manchester police Ian Hopkins (Ian Hopkins) said that, according to the police, executor of the terrorist act was just one man, which carried into the stadium an improvised explosive device and he was killed in the explosion.

“The likelihood that this was a coordinated terrorist attack, planned from abroad, is extremely small,” — said in an interview with CNBC, Richard Fanning (Richard Fenning), the General Director of consulting company Control Risks.

According to him, the terrorist attacks that recently occurred in Europe, point to the growing number of “subordinationist” terrorists, as evidenced by the incident on Westminster bridge. He explained that these people chose a secluded life, their Hobbies led to alienation and develop in them the desire to cause serious harm to others.

“As for the attacks that occur today in Europe, the motives that push people to committing them, there is no pattern”.

However, according to another analyst, the scale of strategic planning in the preparation of the explosions on one of the largest indoor stadiums in Europe were amazing.

“The place that was taken by the suicide bomber, or where he planted an explosive device was chosen with a specific intent to kill, so in this case we can speak about well-thought-out plan, said in his CNBC interview Fred Burton (Fred Burton), Vice-President of Stratfor on the areas of counter-terrorism and corporate security. — This, of course, was a very successful operation from the point of view of those who planned”.

Immediately after the first reports of the attack supporters of Islamic state (a terrorist organization banned in Russia — approx. ed.) in social networks was overwhelmed by jubilation, as reported by the non-governmental organization SITE Intelligence Group, specializing in the fight against terrorism.

What will happen next

Officials of law enforcement agencies will conduct an investigation to find out what kind of explosive device was detonated in the stadium, and who the bomb had created. As Burton said, this fact may be involved, many people.

According to him, until investigators figure out the identity of the terrorist, they don’t know if there’s somewhere other suicide belts.

If the police can find out the sex of the bomb, it is also very helpful to the investigation. “I can tell you from my experience that it helps to establish that this man was doing in the last 24 hours of his life and mainly his contacts.”

According to Penninga, acts of terrorism, perpetrated by individuals, it is very difficult to predict and to prevent.

According to him, if this attack was part of a coordinated campaign, the intelligence services will be able to collect the necessary data and, ultimately, to infiltrate terrorist organizations. “But without that intelligence there is almost no chance to prevent terrorist acts.”

Speaking about the future, the international community should prepare for new terrorist attacks, warned Anne Speckhard (Anne Speckhard), Professor of psychiatry at Georgetown University, engaged in research in the field of counter-terrorism.

In the email she noted that now that “Islamic state” is losing conquered territory, and Ramadan approaching, the militants may well want to demonstrate their power.