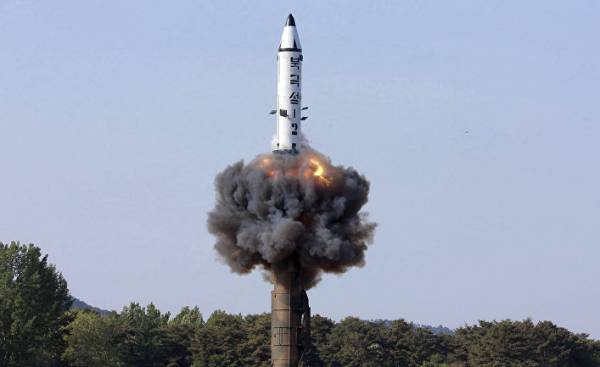 The evening of 21 may, North Korea launched the eighth ballistic missile this year. The international community began to criticize North Korea after each run, but for 20 years there is no effect. Pyongyang says that the military pressure of the administration trump is a show — off. The American policy of dialogue and pressure exists only on paper. The administration of trump just went back to the original course.

“I’m disappointed. You should be wary”. 21 may, during an interview with Fox News U.S. Secretary of state Rex Tillerson criticized the North Korean launch of a ballistic missile. If you take his expression “I’m disappointed” literally, one might get the impression that he was expecting something from North Korea.

In other words, Tillerson acknowledged that the policy of the administration of the tramp against the DPRK was short-sighted, and also had us worried about the prospects for the future.

14 may, North Korea launched a ballistic missile from the vicinity of Cosanga in a North-easterly direction. Starting may 21, was the second in two weeks. Earlier launches were usually carried out early in the morning or in the afternoon, but this time the rocket was launched in the evening. North Korea has demonstrated that it can launch a missile at any time of the day. According to a South Korean military expert, it looks like a ballistic missile ground-ground medium-range missiles launched on 12 February.

The range of this missile covers the whole territory of Japan. It can also be used against GUAM, which is of strategic importance to U.S. troops. It is assumed that the DPRK may conduct a sixth nuclear and missile tests, which the United States may be perceived as crossing the “red line”. Also, the probability that Pyongyang will test the missile and rocket fuel of a new type.

The current launch of a ballistic missile of the DPRK, the palpable response of the United States, also has a chance to shake Washington. First, it is American political circles. They were in chaos as a result of Russian scandal: the sudden dismissal of the President trump the head of the FBI James Komi (James Comey) as well as requirements to complete the investigation in respect of the associates of trump. Increased the possibility that the administration trump will weaken because of these problems.

Secondly, it all happens in the moment when trump is on a foreign trip. It will start with Saudi Arabia, will visit Israel and participate in the meeting of heads of the NATO countries. May 26, in Italy, will start the summit “the big seven”, which will be attended by Prime Minister of Japan Shinzo Abe. The actions of the DPRK will be a freezing shower for all of these events.

Commenting on the purpose of the launch of a ballistic missile of the DPRK, on may 21, a South Korean military expert stated that he was scheduled “start script corresponds to the action of North Korean authorities.” That is, Pyongyang initially did not take into account American military pressure.

After 14 may, North Korea launched a new rocket “Hanson-12”, the UN Security Council warned that further provocations will lead to more serious measures including sanctions. The North Korean foreign Ministry didn’t take it to heart, stressing that the country will produce and test various types of nuclear weapons until then, until the US make the “right choice”.

The DPRK, a dialogue is needed with the administration of the tramp in order to extend the life of the regime of Kim Jong-UN. This requires the U.S. to consider the DPRK as a nuclear power, but the US will not do it.

Disagreements have been around for over 20 years, and it seems that in the near future the parties will come to a common denominator.