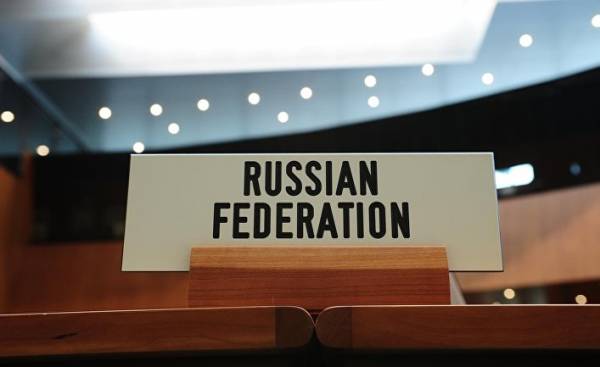 The Russian government announced the submission to the world trade organization (WTO) integrated lawsuit against Ukraine in connection with the imposed restrictions and prohibitions against the Russian Federation. We can already say that this dispute promises to be one of the largest and most complex in the history of the WTO.

On the website of the WTO is still no official information, but from the statements of the Minister of economic development of Russia Maxim Oreshkin clear that the request for consultations was coordinated with the bilateral meeting of the Minister with the head of the WTO, Robert Azevedo.

During the meeting, the Minister stressed Azevedo on the fact that Russia has serious reasons to believe that Ukraine takes action in violation of its WTO obligations. This approach demonstrates the importance and special attention to this issue from the Russian side.

That can challenge Russia?

Based on the press release of the Ministry of economic development, presumably Russia will try to challenge the most of all the Ukrainian limitations that was introduced in 2014 in respect of trade and market access.

First, it may be the ban of the import into the customs territory of Ukraine of goods originating from the Russian Federation, introduced by resolution of CMU dated 30.12.2015 No. 1147, as amended.

According to the Cabinet decision, the ban only applies to the import of goods from Russia, have been applied in response to the Russian food embargo and entered into force in 10 days. Presumably, Ukraine will annually renew the above mentioned prohibition until, while Russia for its part does not cancel the food embargo.

Second, it can be personal special economic and other restrictive measures (sanctions) listed by decision of the Council of national security and defense of Ukraine dated 28 April 2017 and issued by decree of the President of Ukraine of may 15, 2017 No. 133/2017.

As you know, in the law of Ukraine “On sanctions” provides 25 types of sanctions: in particular, the restriction of trade operations; freezing of assets; limitation and suspension of transit of resources, flight, and transportation; revocation of licenses and other permits; limitation and suspension of telecommunication services and use of telecommunication networks of General use; a ban on participation in privatization; introduction of additional measures in the sphere of economic, veterinary, sanitary, phytosanitary and veterinary control. Potentially part of these sanctions could get to the list of those the use of which Russia believes are not compatible with WTO rules.

Moreover, it is possible that the request for consultations can be specified, and the special sanctions of VED applied in accordance with article 37 of the law of Ukraine “On foreign economic activity”, or limit natural and legal persons of the Russian Federation to participate in privatization established by the law of Ukraine of February 16, 2016 No. 1005.

Of course, the consultation will make the application of restrictions in the banking and financial sector. For example, such as not allowing credit institutions to conduct banking payments and transfers and restrictions on the issuance of licenses for foreign currency operations.

Also, according to a press release, Russia will raise the issue of the legality of the introduction of a special regime of taxation applicable to the importation of second-hand Russian car. The law of Ukraine “On amendments to subsection 5 of section XX “Transitional provisions” of the Tax code of Ukraine to stimulate the market development of used vehicles,” dated may 31, 2016 No. 1389-VIII provides for the reduction of excise duties on used cars to December 31, 2018.

The excise tax established by this paragraph shall not apply to passenger vehicles if they originate from a country recognized by the state occupant according to the law of Ukraine and/or recognized by the state aggressor against Ukraine under the laws of, or are imported from the territory of such state of the occupant (the aggressor) and/or from the occupied territory of Ukraine, determined in accordance with the law of Ukraine.

Thirdly, we should not expect that Russia will miss an opportunity to try to challenge the ban on the distribution and demonstration of films and Russian programs, established in the current edition of the law of Ukraine “On cinematography”, as well as restricting access to foreign print products with anti-Ukrainian content in accordance with the law of Ukraine of December 8, 2016 No. 1780-VIII, or a limitation on the exercise of journalistic activities, provided in the resolution of the Verkhovna Rada of Ukraine on February 12, 2015 No. 185-VIII “On temporary suspension of accreditation of journalists and representatives of some mass media of the Russian Federation in bodies of state power of Ukraine”.

Most likely, all the above points

Russia will point to the lack of market access, the violation of the principle of non-discrimination, there is insufficient transparency and predictability, as well as the failure to provide opportunity to comment on the decision.

The estimated position of Ukraine

Of course, Ukraine’s position is based on the fact that the Verkhovna Rada of Ukraine recognized Russia as an aggressor country and, therefore, believes that all trade restrictions fall under exceptions to WTO rules in connection with national security.

St. XXI of GATT is one of the key rules that allow the use of trade-restrictive measures in the form of exclusion, and provides maximum freedom of countries to determine and take whatever action they deem necessary to protect “the essential interests of its security”, if taken in time of war or other emergency in international relations.

In addition, in the case Ukraine will have to argue that the above restrictions have been applied to protect the legitimate interests of national security, a threat which was real and legitimate, and the measures used are proportionate to the existing danger and/or threat. Moreover, it will be necessary to substantiate the link between the threat to the essential interests of its security and proportionality of the applied measures.

However, article XXI of the GATT was used extremely rarely and has not previously been formally interpreted by the dispute settlement Body of the WTO, so there is no case law that would define the legitimacy of national security interests by the subjective decision of the individual member countries of the WTO, and which would define the elements that affect the procedure, conditions and circumstances of application of article XXI of the GATT.

The dispute between Ukraine and Russia may be the first precedent on the interpretation of article XXI of the GATT, which will affect the understanding of the legality of its application.

Moreover, so far this article has considered a kind of Pandora’s box, the opening of which could “derail” the current system of commercial law. That is why the EU, USA, Canada, Australia were in no hurry to appeal to this article even after the application of a food embargo with Russia.

And besides, those same countries, according to unofficial information, held by the Ukraine challenge Russia’s sanctions in the WTO.

Now this Pandora’s box was opened by Russia. This means that the dispute of Russia and Ukraine promises to be a global event. That is why many member countries of the WTO will closely monitor developments in this case, since case law becomes binding on them.

This means that the Russian action may open the door to similar applications in respect of the Russian Federation.

However, there is the established opinion of some experts that the dispute settlement Body will continue to refrain from detailed precedent regarding the interpretation of article XXI GATT in order to ensure balance and non-infringement of sovereign rights.

To the extent possible — will just practice and time.