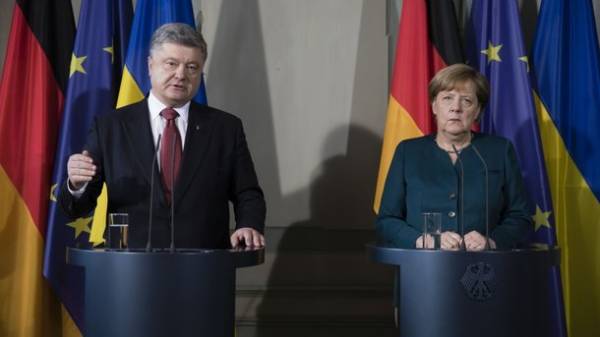 President of Ukraine Petro Poroshenko said that he had discussed with Federal Chancellor of Germany Angela Merkel scenario of pressure on the Russian Federation for implementation of the Minsk agreements. This is stated in the message on the official website of the President.

“A significant portion of time was devoted to coordination of actions on implementation of the Minsk agreements. Stated that Russia is not fulfilling the Minsk agreements and we need to develop a script that would motivate Russia to sit at the negotiating table and to implement what it promised in the first place about security,” said Poroshenko on Saturday evening in Berlin.

According to the President, we must do everything to restore peace on the Ukrainian land, to end the occupation and that Ukraine has the full support of Germany.

“In addition, we have agreed that if the Minsk agreements are not adhered to, then with high probability the EU sanctions will continue. It is very important that this meeting took place on the eve of the summit “the Big seven”, where in Sicily the question of Ukraine will stand high on the agenda and this issue will also be present at the meeting Big twenty”, – said Poroshenko.

The parties also discussed the issues of bilateral cooperation with Germany, including regarding assistance to the Donetsk and Lugansk regions.

“Agreed on the financial support of the reforms and stated a significant success of the Ukrainian team in the implementation of reforms,” – said the President of Ukraine.