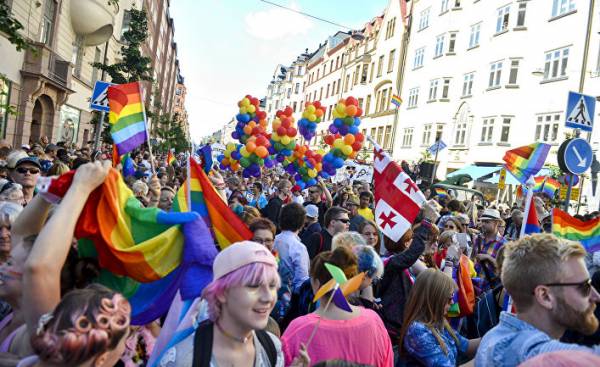 As Svenska Dagbladet reported earlier, in the Republic of Chechnya of the Russian Federation for more than hundreds of gay men were kidnapped and at least three men were killed on the basis of their sexual orientation.

Taken people reportedly were beaten, tortured and forced to give the identities of the other members of the LGBT community, according to the independent “Novaya Gazeta”, which first published information about the persecution.

On Thursday, the European Parliament decided that the Chechen authorities should immediately investigate these data. The parliamentarians called on Russian President Vladimir Putin to take some action to change the situation, to conduct an objective investigation.

MEP Anna head (Anna Hedh), a member of the Swedish Social democratic party, said that the European Commission and member countries of the EU should exert pressure on Russia.

“Of course, love is free — everyone should be allowed to love whoever he wants, without risking to be killed for it,” says Anna head.

Chechen security forces have been accused of actions on the direct orders of the leader, Ramzan Kadyrov. His spokesman Alvi Karimov said that the harassment can’t be true, because in Chechnya there are no gays.

The LGBT community rarely seek help because they fear retribution from the authorities. Homophobia is widespread, the families reject leaving in the underground of homosexuals. People at risk to fall victim to honor killings, if you go back to the family, tells the independent Russian “New newspaper”.

At least 80 people have applied for assistance to the Russian LGBT network. Many (the exact number is kept secret) has moved to asylum on the territory of Russia or abroad, others are waiting for evacuation. Some went underground.

On whether to grant asylum to victims from Chechnya, among EU leaders, much was said but little was done.

Vikström, Cecilia (Cecilia Wikström) and Anna head wrote a letter to the Minister for foreign Affairs Margot Wallström (Margot Wallström) and called for Sweden to hurry up and take the lead on providing shelters.

“We are working to convince member countries to issue visas to protect. But this is not enough”.

Germany is also considering the issuance of such visas, said Anna head.

Svenska Dagbladet: do You think Sweden can really begin to grant asylum to gay people?

Anna head: I can’t answer this question, it is decided by the government. According to our current policy, the representatives of the LGBT community in distress, need immediate assistance.

Anna head hopes that Russia knows about the resolution, and this will spur the debate about gay rights.

“I feel pretty helpless, because I know that no pretty words on paper will have little effect. Resolution can warm the readiness of the European Commission to respond torsional rigidity”.

Chechnya, technically a part of Russia, to a certain extent operates as an independent state, where the word leader Ramzan Kadyrov often, it seems, means more than the Russian laws. After two devastating wars, Kadyrov rebuilt the Republic on the money of Moscow. Chechen society is conservative and people find it difficult to resist the authorities.